The Last Bus is a road trip movie with a difference. Starring Timothy Spall, the drama follows Tom, an elderly widower who takes a series of local bus journeys from John O’Groats, in Scotland, as he makes a poignant return to first home he shared with his late wife in Land’s End, at the very Cornish tip of England. Directed by Scottish filmmaker and painter Gillies MacKinnon, The Last Bus appears encompass the whole 875-mile journey, but was, however, filmed completely in Scotland.

“They were looking for a Scottish-based DP and I was recommended by a few people,” says Glasgow-based cinematographer George Geddes. “Gillies and I just clicked straight away in the interview.” 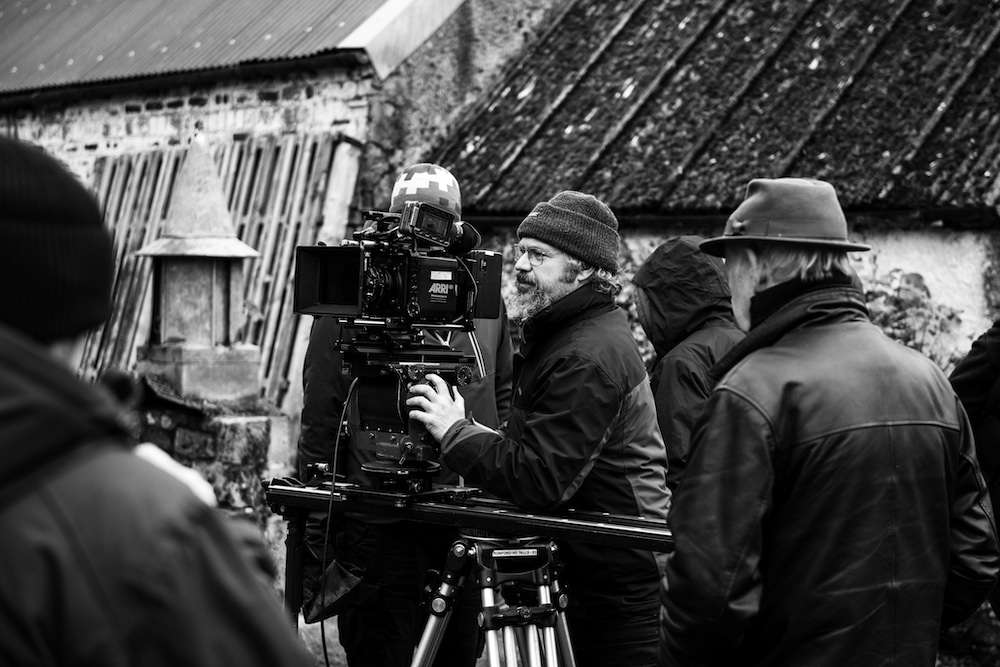 The Last Bus was originally meant to shoot in February 2019, but was put on hold due to funding issues. By the time shooting could commence in October of that year, production was really busy in Scotland.

“My pool of regular crew were all busy,” says Geddes. “The focus puller and DIT had to come up from Manchester and my gaffer was someone I’d never met until the week before the shoot. Usually you’ve got a shorthand with your regular crew. However, although I had just met my team, when we got started it all worked very well.

“My gaffer, Stuart Johnson, brought the lighting kit with him, along with our two sparks,” he adds. “We had an Astera kit, a few Fresnels, LED Lite Mats and LED panels, and a handful of HMIs, but nothing bigger than a 2.5K, as we didn’t have the luxury of a generator. 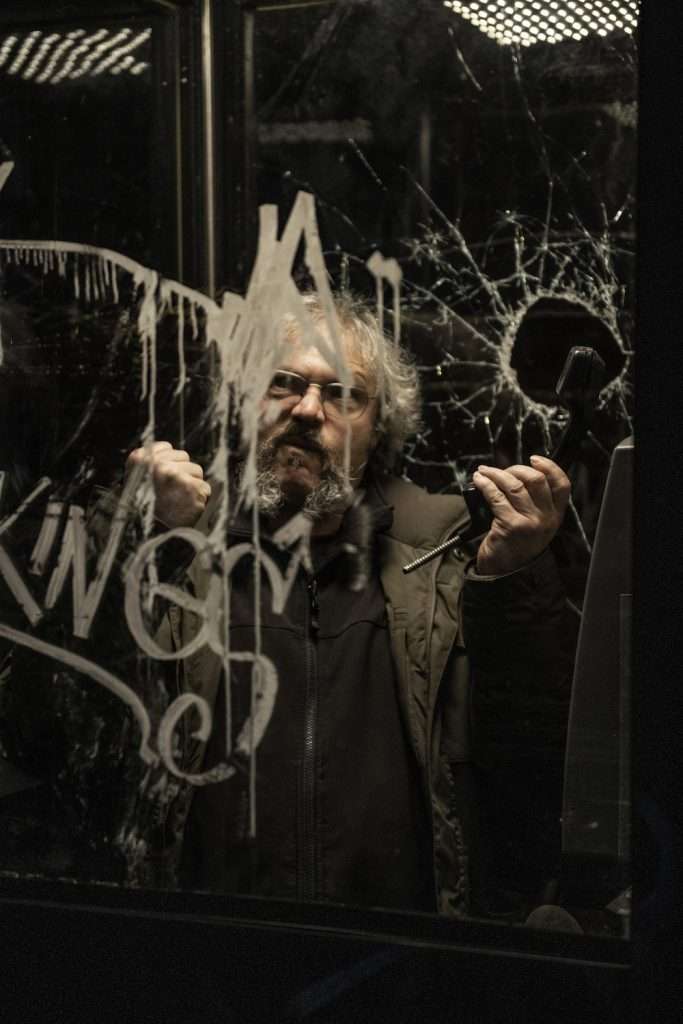 “Generally I’ll operate, but because there was a lot of Steadicam in this film, I managed to convince Martin Newstead, a Steadicam operator I work with a lot, to come on as my camera operator,” he says. “He could slip over from the A-camera and do the Steadicam as and when we needed it. Thankfully that allowed me to get things done as I had a lot on my plate.”

One of those things was the issue of converting multiple buses into filmable sets – 13 were used in all, standing in for 40 vehicles. 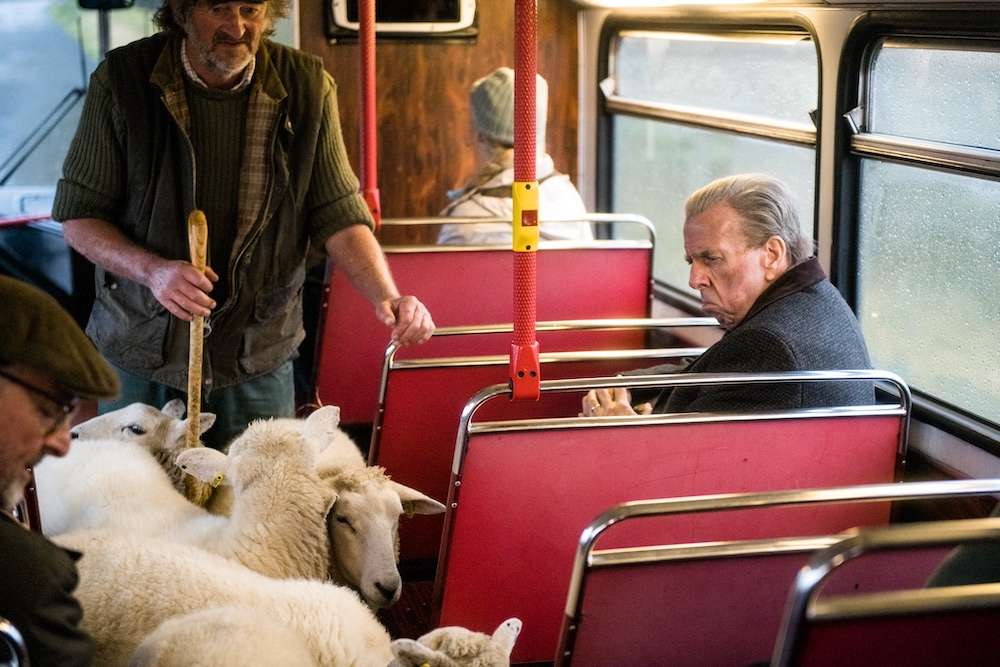 “We knew that production always going to be challenging, and it would have been impossible to shoot during the Covid pandemic,” says Geddes. “We had to pack-in the cast and the crew, then I had to check the lighting, get the sparks to flag-off a window, or other things that would allow us more freedom to shoot. Thankfully the Astera kit worked well in tight spaces, and the LED panels gave a soft source that we could bring in close.” 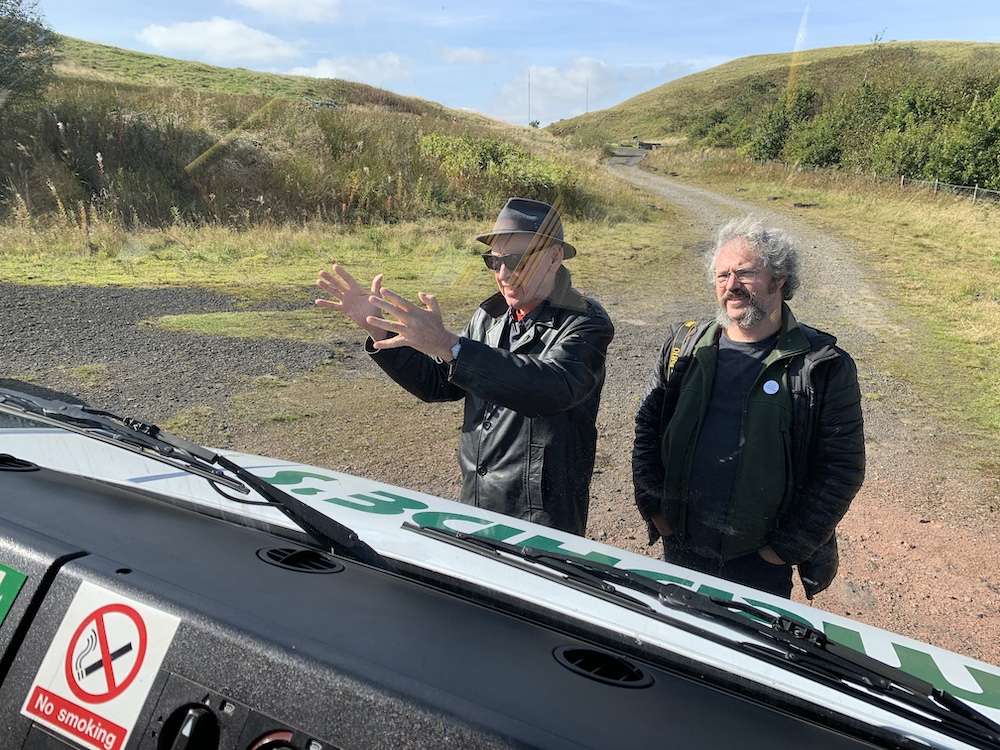 Due mainly to the amount of Steadicam work that would be involved, Geddes’ camera of choice was the ARRI Alexa Mini. Kit was provided by Progressive Broadcast Hire in Glasgow.

“The Alexa is so easy to work with.”

“I do love the ARRI camera,” says Geddes. “The Alexa is so easy to work with. As regards framing, I spoke to Gillies about what he had in mind, and 2:35:1 seemed right for the aspect ratio of the film. I’ve always liked Cooke Primes, so we had a set of S3 Panchros. I like the way the softness falls away at the edges and the bokeh. We also had a couple of Angénieux Optimo zooms which we used for GVs out windows or travelling shots.”

“We knew a lot of the film would play on Tim’s performance as Tom. It’s his journey,” he continues. “There’s a lot of 40mm, wide close-ups. Even when he’s in a crowd, we’d be centred on Tim, interacting with him. There was not a lot of long lens work, apart from when he arrives at Land’s End and he’s in a crowd. That’s also the only time we had two cameras out together, and we used a long lens to show him against the horizon.” 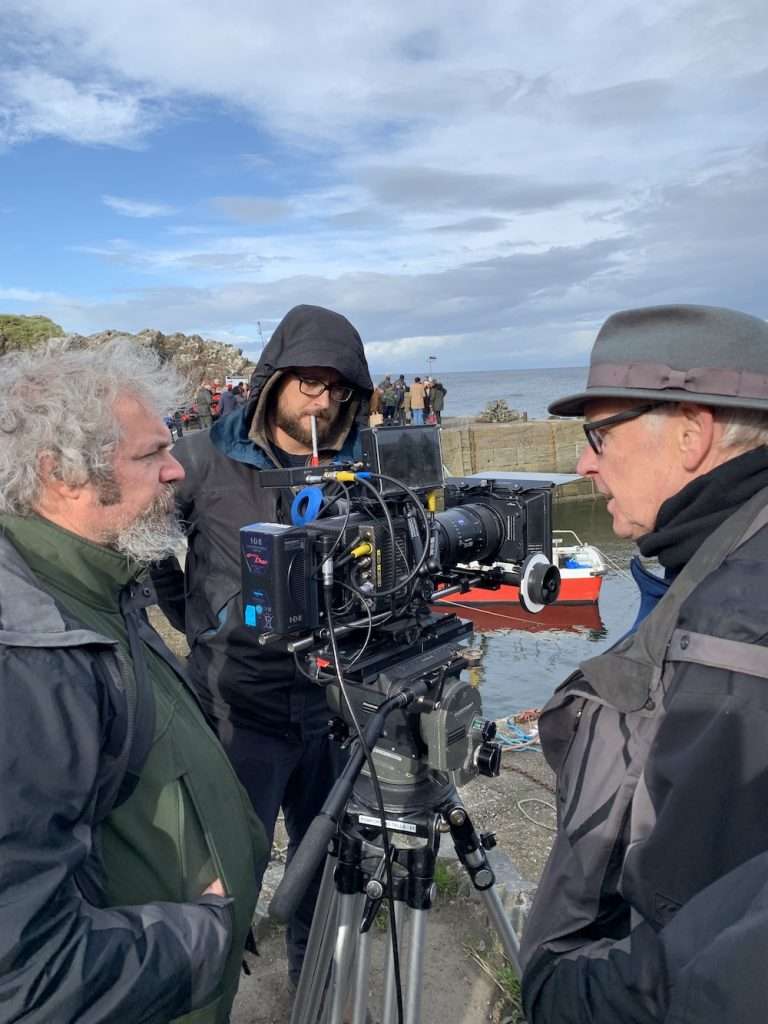 “One of the challenges was we only had 22 days to shot the film,” says Geddes. “In the prep, we had to schedule how many locations we could shoot close to one another. We filmed a lot in Dunure (in Ayrshire), parts of which stood-in for both Land’s End and John O’Groats. We had access to a race track, so we shot loads there in the first week, standing-in for travelling between different locations.”

The Bridgeton Bus Garage in Glasgow, now a museum, stood in for six different locations including high-rise flats, a hospital ward, as well as various bus depots and stations. 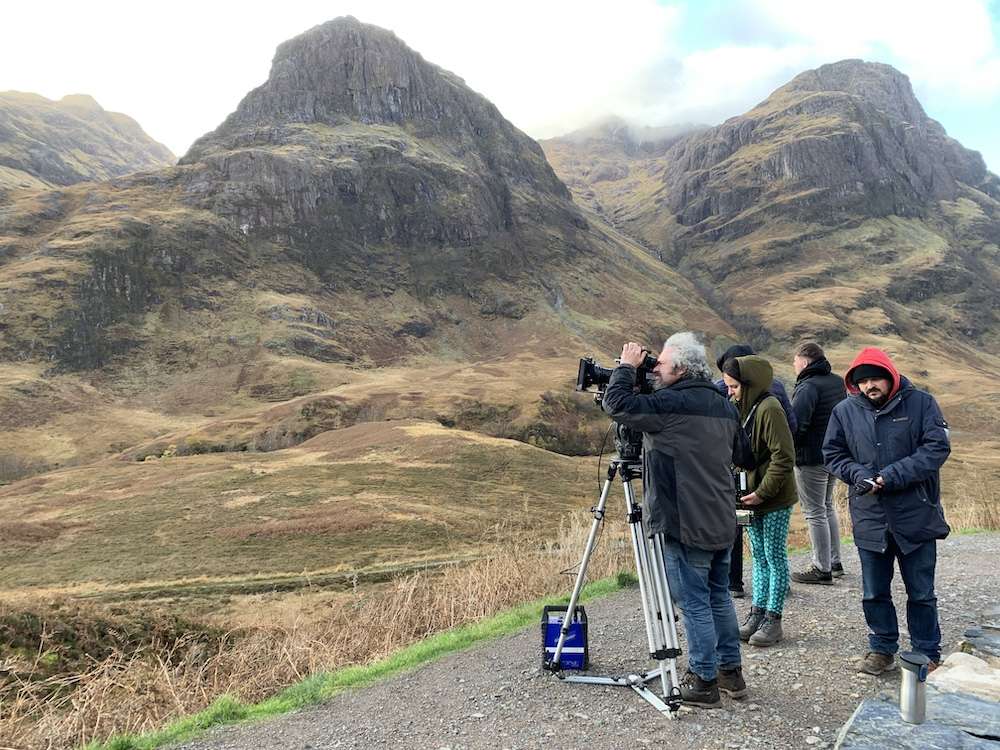 “The bus garage was just redressed and we moved around. There was a lot of that kind of thing and our art director, Andy Harris, was a real joy to work with,” says Geddes. “There’s a house that the couple live in, at the beginning when they travel up from Land’s End to John O’ Groats, and we needed to shoot it in three different time periods. At one point we were shooting in one part of the house while the art department were round the corner pulling-up all the weeds and putting in sunflowers. But it worked really well.”

Another challenge was getting hold of appropriate buses for the various parts of the country. 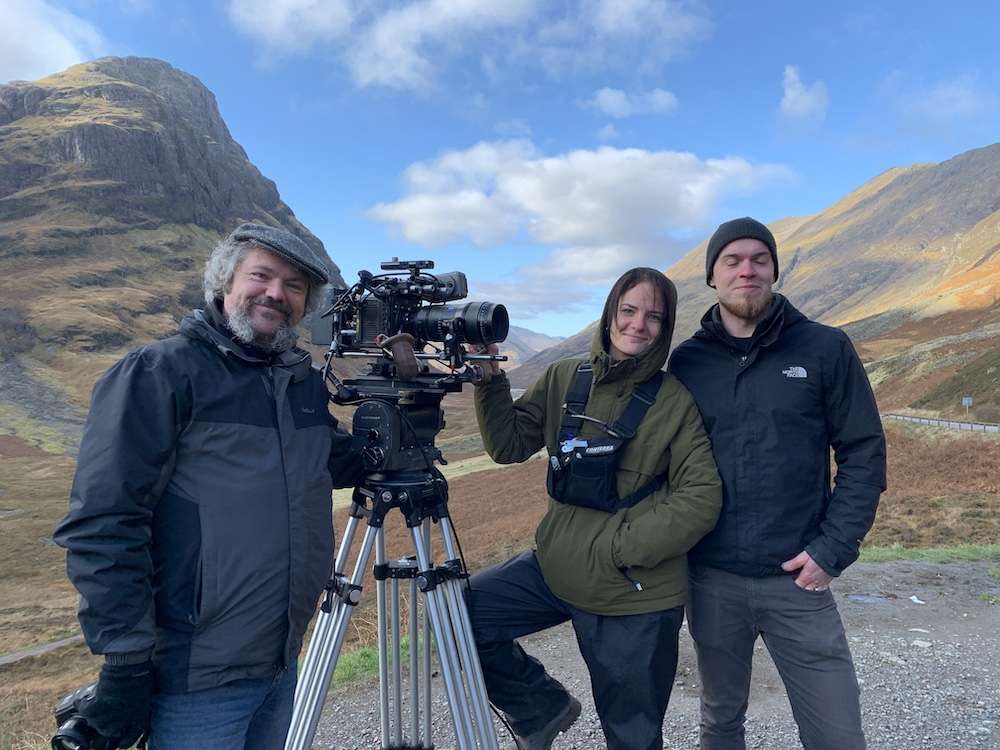 “The script called for 39 buses, but I think we used 13 in the end,” he says. “There were quite a few scenes rewritten as being stuck in traffic, or at bus stops, rather than being on a moving vehicle. Luckily we had the writer Joe Ainsworth on-board – and on-board – who was very supportive of us making changes.”

Although Mackinnon and Geddes planned extensively, it often wasn’t until the crew and cast were in-situ on-location that Geddes could start blocking and that camera angles could be finally decided.

“We had to plan this shoot to the ‘nth’ degree.”

“That’s a big part of what I do, constantly finding shots as we go,” he says. “Also with Gillies being very visual, he will edit and re-edit as he goes. He’s brilliant.”

MacKinnon was always on-set. “Gillies has more energy than anyone I’ve ever met,” Geddes recalls. “He knew as well as I did that we had to plan this shoot to the ‘nth’ degree. It was his forthrightness and energy that got us in-place before we shot.” 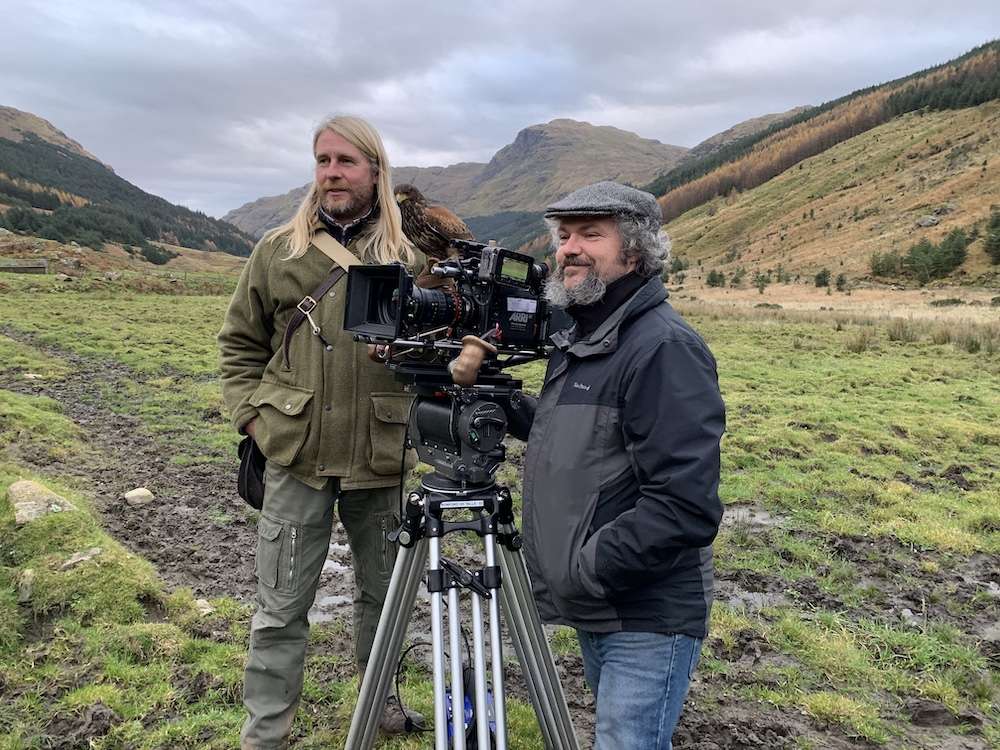 “There’s lots of jumping back and forth in time, so we had lots of discussions about how to handle the transitions,” says Geddes. “I used filters for the flashback scenes and we used two different LUTs for the time differences, just to give Gillies a vague approximation on the monitor.

“The travel is all shot very naturalistic; we tried to keep it low-key as much as possible,” he adds. “Gillies wanted to introduce more subtle tones when it came to the flashbacks to the 1950s and we talked a lot with Andy Harris about things like the colour on walls.”

Geddes’ favourite scene comes right at the start, with Spall’s character washing dishes at the sink in a cottage while watching his wife in the garden through the window. 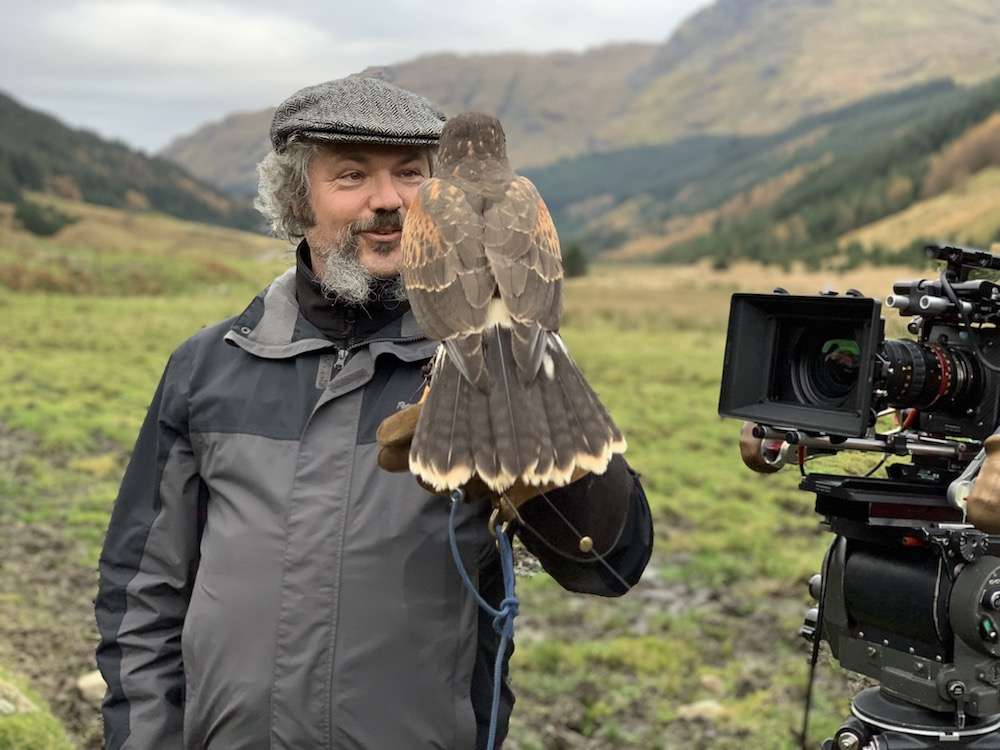 “I lit it with one hard source that would fall away as soon as you stepped away from the window. I was able to tweak that really nicely,” he says. “We mirrored those shots later on, and so that echo had a bit more of an impact.

The Last Bus was finished at Lipsync Post. “It was a real pleasure working in the grade with Jamie Welsh,” says Geddes. “Tim’s partner had a mustard-coloured coat and it becomes a trigger for his flashbacks when he sees the colour, such as when he sees a girl enter a café wearing a similar jacket. A certain scarf his wife wears when older works in a similar manner. We boosted that colour in the grade to show it’s what Tim’s character was reacting to,” explains Geddes. “It wasn’t too in your face, just subtle.”

With this type of story there’s always the danger of making things a bit twee, but the director and the lead actor avoided this. 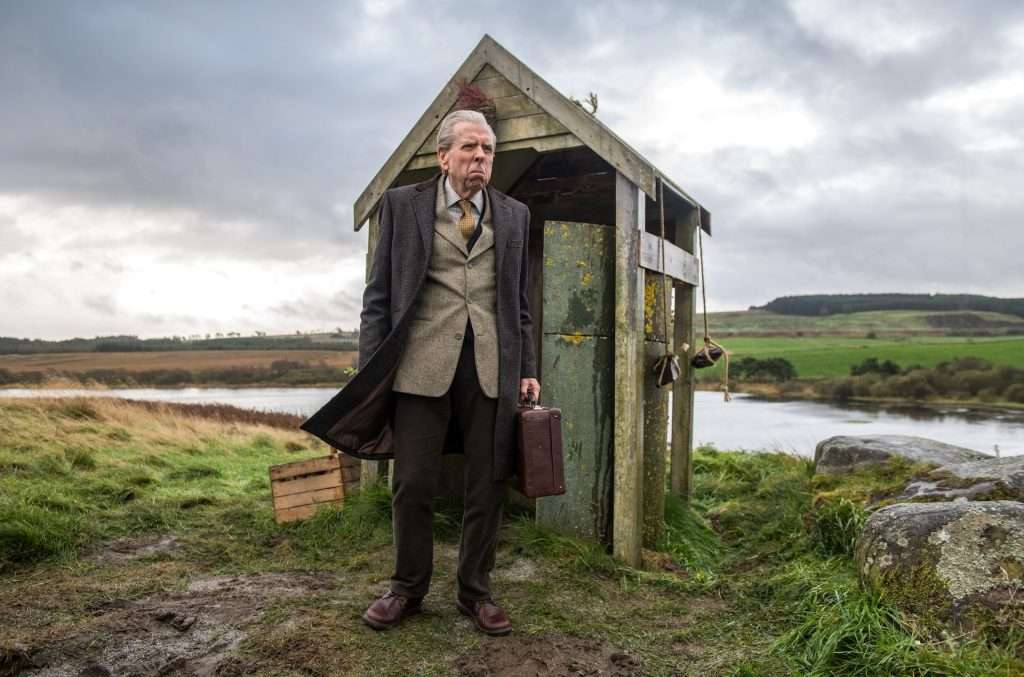 “It was a privilege to work with Timothy Spall, and lovely working with him and Gillies together, watching them iron out any clunkiness or unnecessary exposition,” says Geddes. “I think it’s a handsome movie. I’m very pleased with it.”