The Colour Room, showing on Sky Cinema, is a British drama film that explores the life of renowned ceramicist and feminist icon, Clarice Cliff, during the 1920s. Tracing her origins as a working-class factory girl to celebrated ceramics designer, the film depicts how Cliff (Phoebe Dynevor) revolutionised the pottery industry, introducing colourful and unique art-deco style patterns into her work. The Colour Room intertwines the greyness of industrial factories with the vibrancy that typified her work, with the deployment of colour in the visual storytelling also used to subtly echo the rise of feminism and the shift away from a male-dominated traditional past towards a brighter future.

Directed by Claire McCarthy and written by Claire Peate, The Colour Room was shot by McCarthy’s partner and frequent collaborator DP Denson Baker ACS NZCS. The Colour Room marks their third feature film together, starting with The Waiting City (2009) and followed by Ophelia (2018). They have also collaborated on a number of music videos, short films, as well as the acclaimed TV series The Luminaries (2020) and Domina (2021). 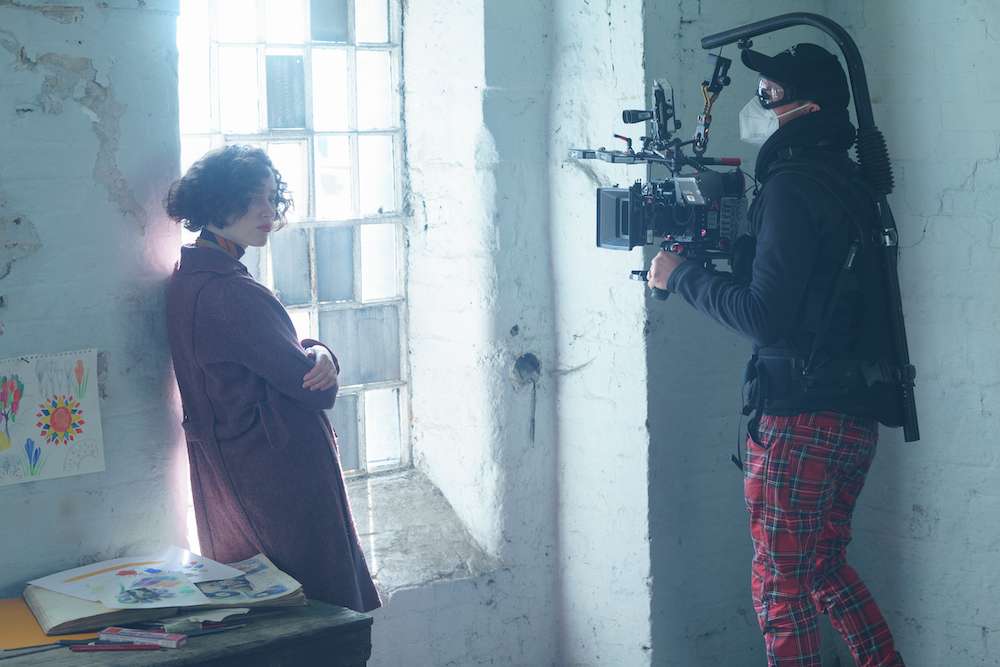 “One of the first things we said about The Colour Room was that we didn’t strictly want it to be a biopic, but a little slice of this artist’s life,” says Baker. “We wanted to incorporate Clarice’s art, her style and her colour palette, into the visual style, but did not want to make a dusty, musty period film, which it could very easily have been as it’s set in The Potteries in the Midlands during the 1920s.”

“We wanted it to capture Clarice’s art, style and colour palette, but did not want to make a dusty, musty period film”

Baker and McCarthy looked at archival photography from the period as a reference point. They also explored several artist biopics, such as Love Is the Devil: Study For A Portrait Of Francis Bacon (1998, dir. John Maybury, DP John Mathieson BSC), Basquiat (1996, dir. Julian Schnabel, DP Ron Fortunato) and Pollock (2000, dir. Ed Harris, DP Lisa Rinzler) to see how they had previously incorporated an artist’s look, aesthetic, style and colour palette into a feature film. 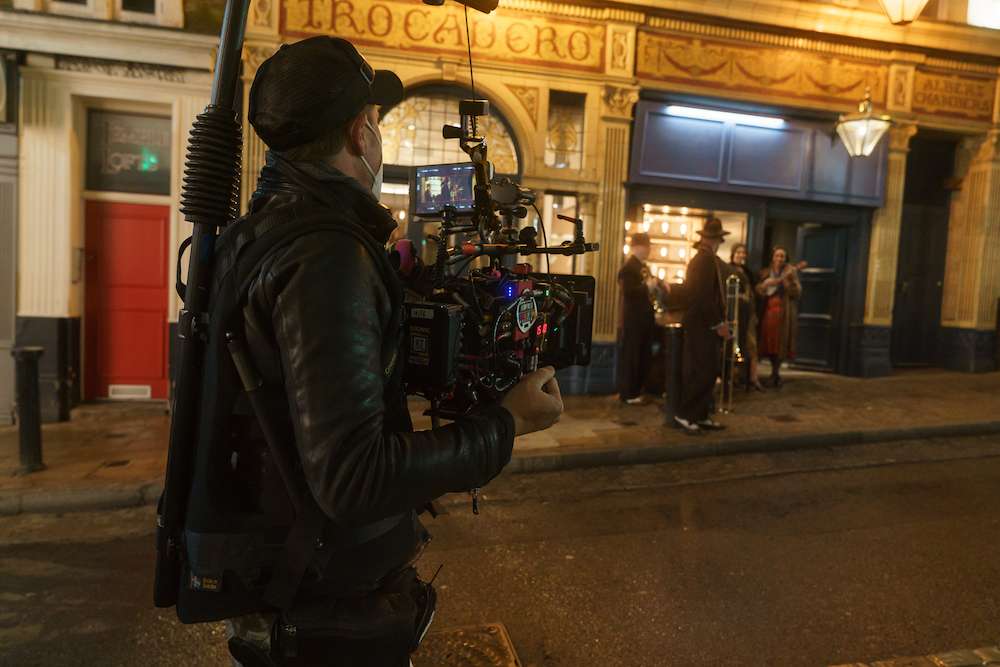 “We did get quite a bit of inspiration from those references, but we developed our own style of framing and found our own look, which was quite different to what those other films did,” says Baker. “By the time we got to shooting, we felt like we knew exactly what we wanted and there was a lot less talk over how we were going to creatively or technically achieve things on-set.”

The production was shot over a period of 27 days during the 2021 Covid-19 lockdown, on location in Birmingham and at the Gladstone Pottery Museum, Stoke-On-Trent, in the UK. There were limits as to how many people could work on-set, and some interiors had to be built to accommodate the cast and crew. According to Baker, “Working-class homes of that period were very small, and that fact that there were Covid restrictions on us, made it all the more challenging.” 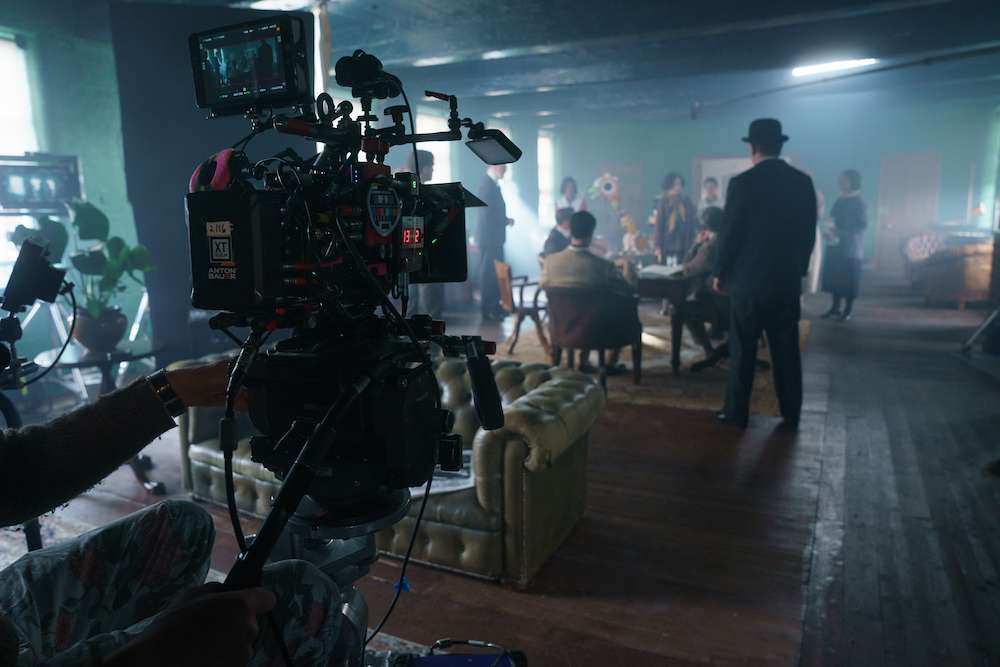 Occasionally, lockdown did work in their favour, as Baker explains, “it meant a lot of the places that we generally would have difficulty accessing were now available to us because they had closed-down during lockdown.”

Location scouting wasn’t completely smooth sailing and proved to be a challenge. Baker recalls, “it was incredible how the towns would have been like once long ago, but a lot of what is left has been left to wrack and ruin. You can see completely dilapidated buildings, or ones which have been turned into a museum and look almost too clean and polished.”

Baker selected the ARRI Alexa Mini to shoot the film. Discussing his approach to camera movement, Baker explains that he used a variety of tools to achieve the camera operating style, including the ARRI Trinity camera stabiliser to achieve dynamic moves. 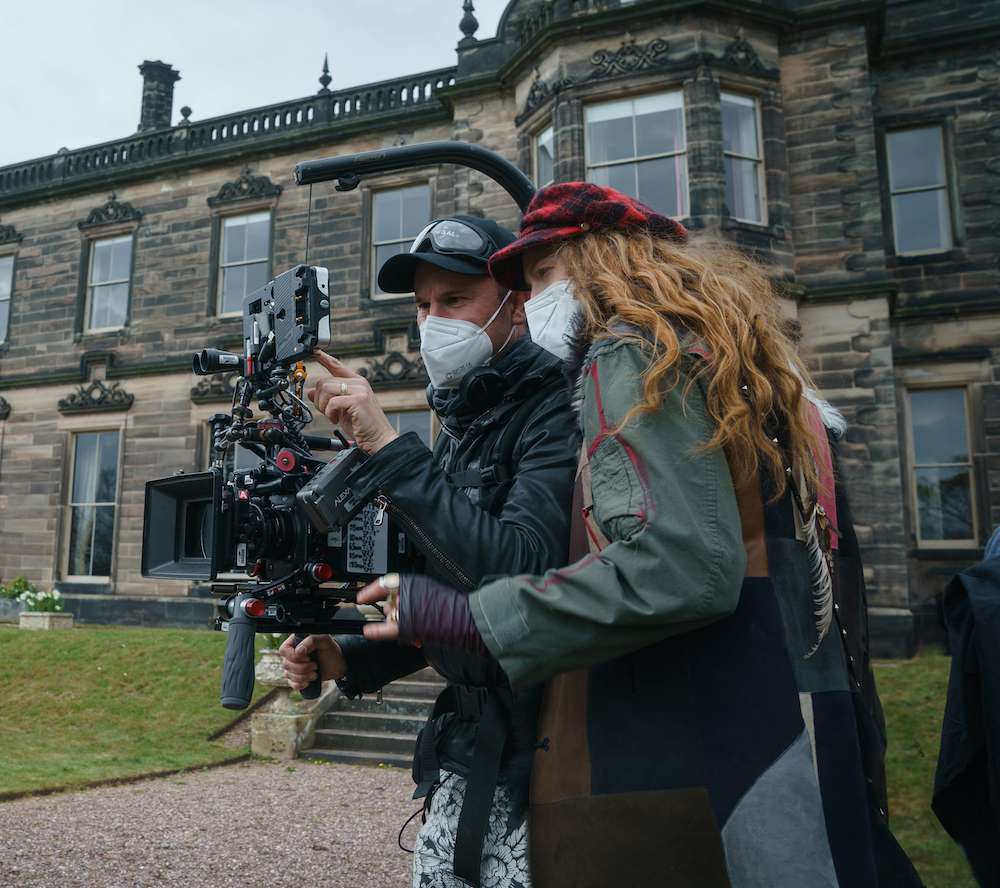 “We wanted to have a vibrancy, a youthful, exciting and kinetic quality to the camera to match Clarice’s energy,” he says. “So there were quite kinetic moments which move throughout the narrative with her. We felt that worked quite effectively.”

Having extensively tested a variety of lenses with ARRI Rental, Baker landed on the vintage Zeiss Super Speeds to pair with the ARRI Alexa Mini.

“We went with an uncoated set of lenses which we used quite a bit to get enhanced flares and low contrast. We also had a coated set, which we used frequently too when we didn’t want the lens flares to be so pronounced, or wanted more control over the image. Frequently switching between the two lens sets. 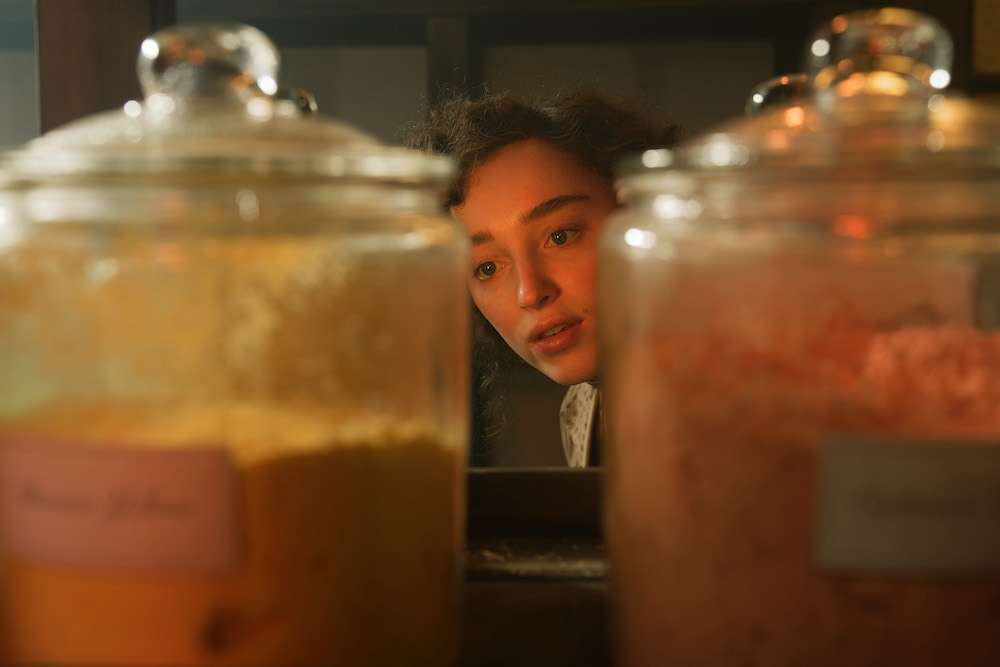 Colour was an important element of the overall aesthetic. Baker notes, “Clarice had quite a distinct colour palette within her work, which her fans will be very familiar with. She also had, as most artists do, an evolution of her style and colours throughout her life. So we wanted to trace that a little bit and track that throughout her story. We did that using a colour blooming technique, and a lot of it was also achieved through the production and costume design and well as through the lighting too.”

Baker selected Rotolight Titan X1 and X2s to light the film. “We used some interesting colour using LEDs. We could output washes of colour that would hit the lens, so that flares or blooms would creep into the image and add a bit of colour into the frame. Sometimes I also used pocket LEDs, mounted on Noga Arms either side of the lens, when I wanted to wash a little bit of colour through the corners, top or the bottom of the frame – not usually across someone’s face, but just as a way to introduce a bit more of our colour palette in an interesting way.”

“For example, the scene in the colour room was the first we tested using the pocket LEDs. We felt it was the time Clarice really put her stamp on the art world and it was a crucial scene for us to do something. So I had the pocket LEDs mounted to the top of the camera and put them into a colour-cycling mode so they would shift through different colours of varying rates. This gave the image a quality of magical realism and helped to depict the key turning point in Clarice’s journey into colour.” 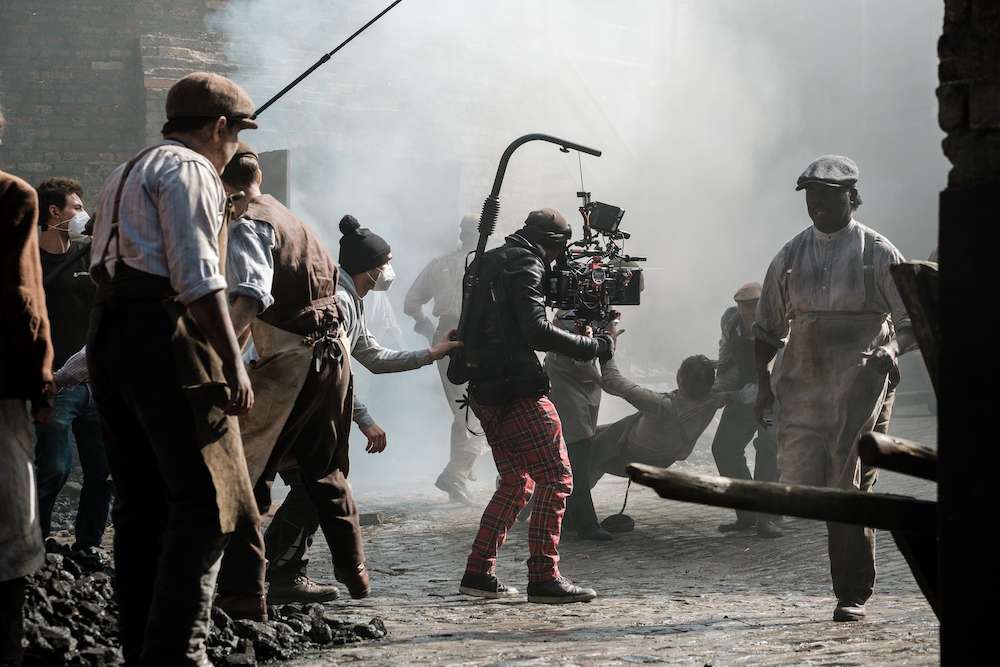 Baker’s crew included gaffer, Howard Davidson who used an iPad to dial-in colour and control the Rotolight Titans, “to change a colour, or shift it here or there. Also, I love to have what we see on the on-set monitor and what the editors work with in post production, be as close as possible to what the final image is going to be,” says Baker.

The crew also included DIT Deloris Collins. “She was fantastic,” explains Baker. “We set-up some LUTs in pre-production with colourist Andy Lee from Onsight, as tested with them at ARRI Rental. We didn’t want to have too many LUTs to contend with during the shoot, and went with three – a day LUT, a night LUT and a de-saturated LUT – and used whatever was appropriate for each particular scene.” 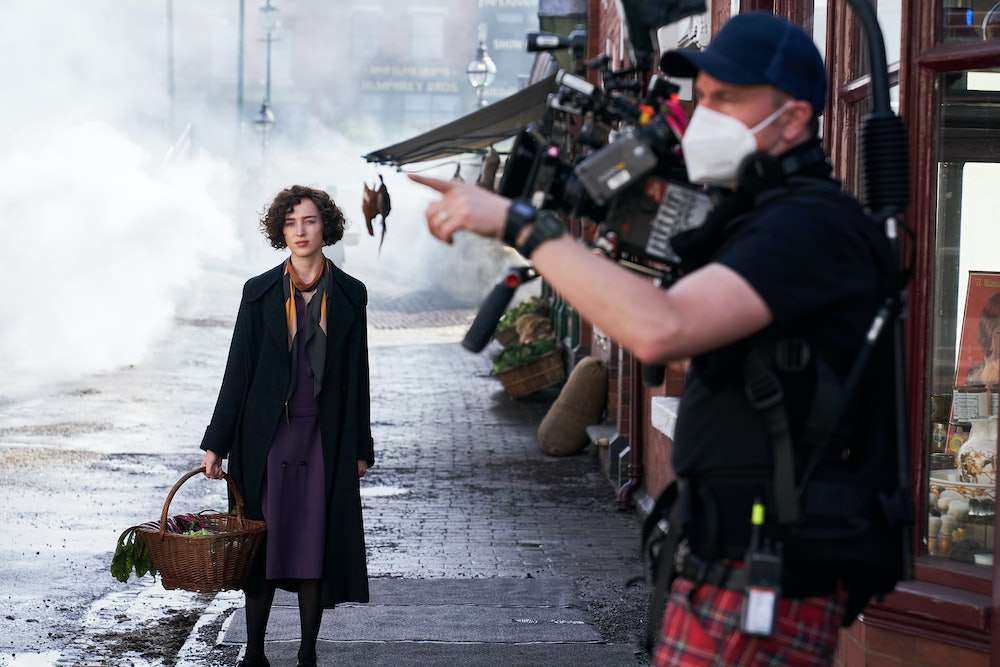 “It’s become more and more apparent to me just how much cinematography and filmmaking is not just the work you do on set in your daily role,” Baker concludes, “I’ve been doing a lot of pitching recently and putting together look books, especially on projects with my wife. Having that additional background – from typography, painting and photography – they are all techniques that I’m using as part of my career these days, which is not what I expected when I first got into cinematography.”