Nightmare Alley represents the fourth collaboration between director Guillermo del Toro and Danish cinematographer Dan Laustsen DFF ASC. Unlike the outlandish fantasy stories that del Toro is well known for, his new film takes place entirely in the real world, although with a film noir flourish.

The movie is a mystery-thriller that takes place on the eve of World War II. It stars Bradley Cooper as Stanton Carlisle, a man who learns the skills of a grifter whilst labouring at a seedy travelling carnival. He applies his new-found talents to ripping-off high-society types in Buffalo, New York, until he finally meets his match, with disastrous results, in the person of a mysterious femme fatale, a psychiatrist named Dr. Lilith Ritter, played by Cate Blanchett. 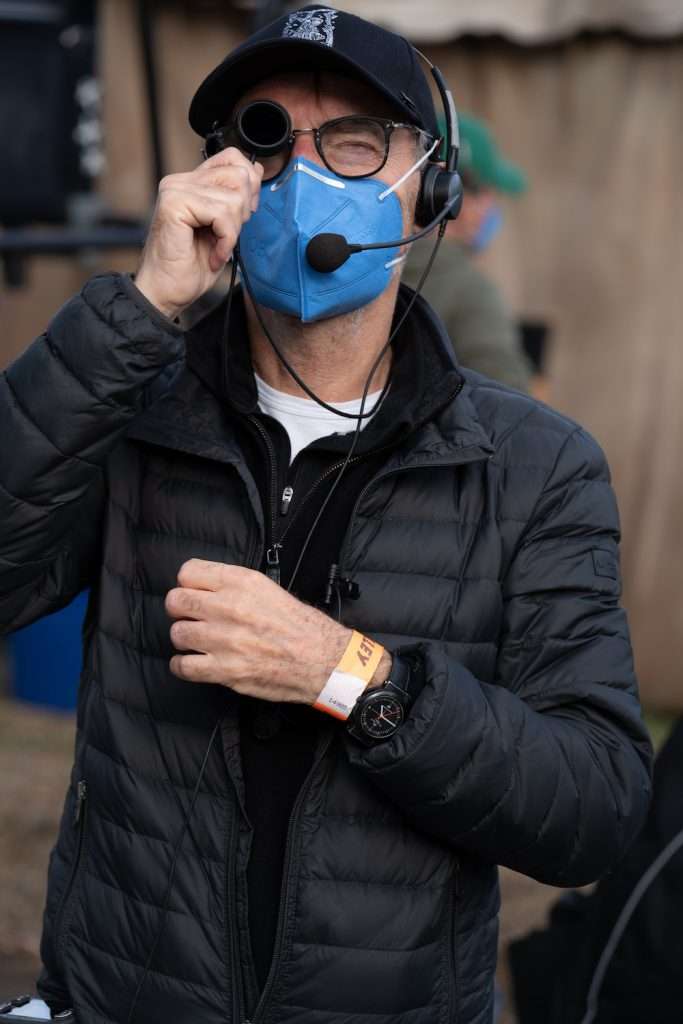 Laustsen, who was nominated for an Academy Award for shooting del Toro’s last film, The Shape Of Water in 2017, emphasises that he and the director followed their own vision for exactly “how noirish” to make the film, based on the 1946 novel of the same name by William Lindsay Gresham. Indeed, Laustsen says he never saw the original film version of Nightmare Alley (1947, dir. Edmund Goulding, DP Lee Garmes ASC).

“For me, the director is the most important thing,” says Laustsen. “Guillermo is a master, a genius, and a very visual director. He first told me about this story whilst we were still shooting The Shape Of Water, and then a bit later, he sent me the screenplay, which he co-wrote with Kim Morgan. Instead of watching older movies, we decided it was between us as to how we should play this game. Guillermo had a strong vision with his moodboards and sketches, and those gave me the cues I needed. 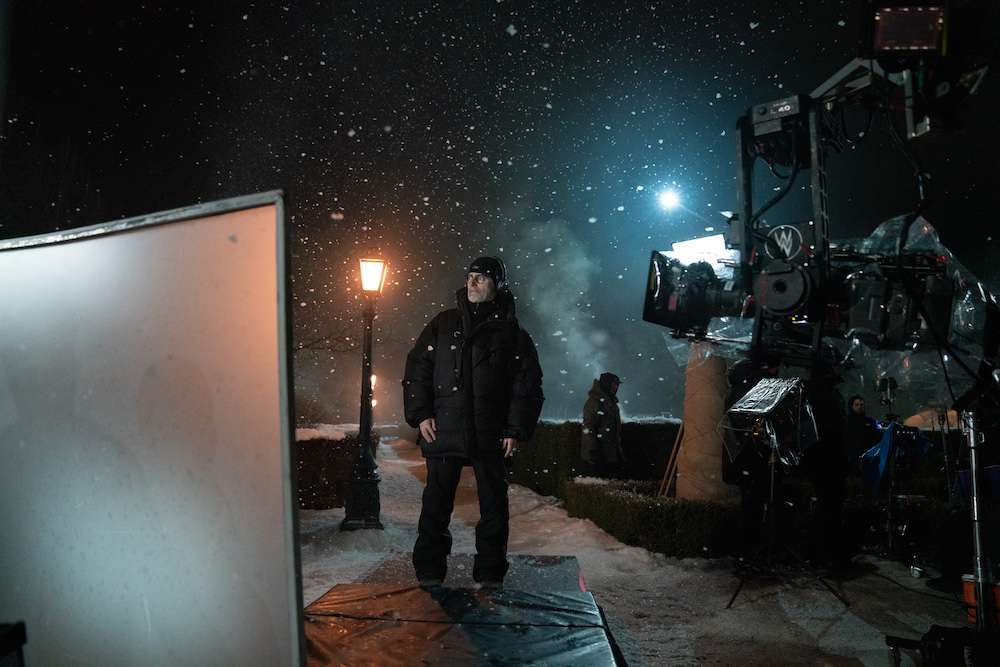 “It ended up being a long process, together with Guillermo and production designer Tamara Deverell, figuring out how the sets should look, what kind of camera and lenses to use, and what kind of lighting and colour palette to adopt. We eventually decided on the standard widescreen 1.85:1 aspect ratio. But the noirish look came from the fact that the movie plays-out in the 1940s as the war is starting, so the production design, cars and the wardrobe by Luis Sequeira, all had the ‘40’s feeling generally.

“However, the first part of the movie, which takes place at the carnival, was shot more like a 21st century thriller than a film from that period. Then, in the second half, as we move to Buffalo and high society, we wanted more of a noir look – more old-fashioned and precise lighting on the faces and close-ups of Bradley and Cate, and in the office of Cate’s character generally.”

Laustsen says he and del Toro knew early-on they wanted to shoot the movie using the ARRI Alexa camera platform following their use of the Alexa XT on The Shape Of Water. 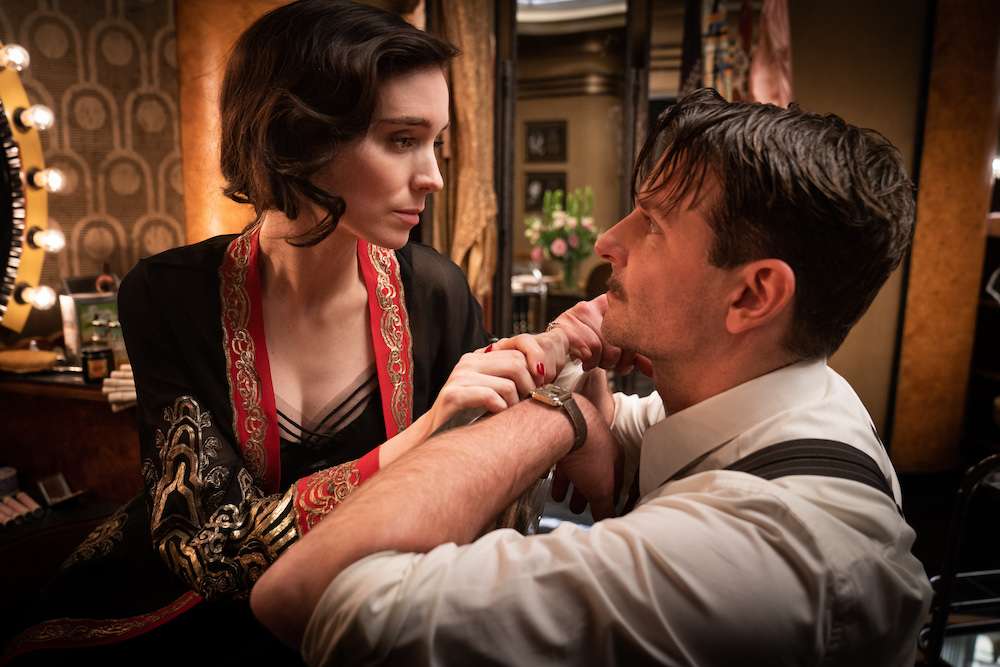 “Here, we wanted to go more large-format,” he explains. “I felt depth-of-field with a large-format camera would be really good for the light we wanted to use, and the fact that there would be a lot of medium and close-up shots – it’s so strong for faces and skin tones. So, we chose ARRI Alexa 65 for its big sensor and low-light capabilities as our A-camera, plus Alexa Mini LF strictly for a limited number of Steadicam shots, and Alexa LF for high-speed work. About 80% of the movie was shot on a jib arm, hothead or Technocrane using the Alexa 65. We don’t have any shots where the operator was looking into a viewfinder.”

Laustsen says he and del Toro “wanted to move the camera a lot, but nothing crazy – just to keep attention on the story. However, we did shoot more wide-angle compared to what we have done before. We lowered the ceiling as much as we could, so you could see it all the time, to evoke the feeling that Bradley’s character is metaphorically inside a box.” 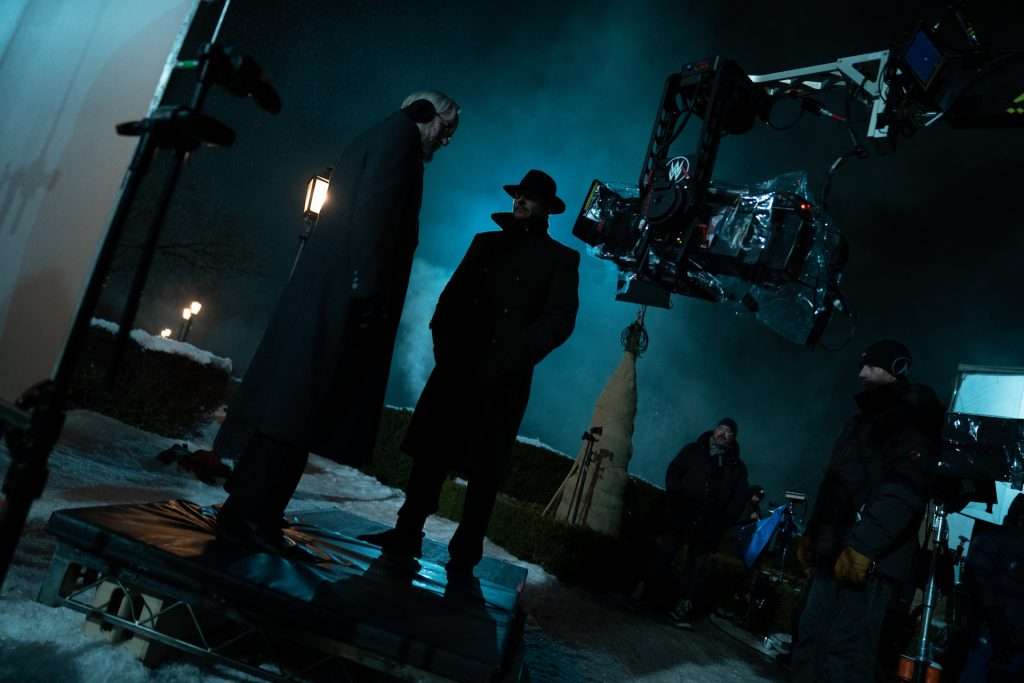 All lensing was done using ARRI Signature Primes – 18mm through to 124mm focal lengths, with no zooms involved – according to first AC Doug Lavender.

“Those Primes have a consistent T-stop at T1.8 which Dan really liked, both for consistent lighting and for not needing to change iris rings on the remote iris control when we switched lenses,” Lavender relates.

“Dan also really liked that the Signature Primes could go quite close to the action, since wide and close was the basic look-and-feel of the movie, with a 14-inch minimum focus on the wide lenses. They also offered the option of using rear lens filtering, thereby eliminating the need for front filters and a matte box, and avoiding any interference from lens flaring and shadows when going in close.

“Dan wanted diffusion and neutral density combo filters so we could use diffusion with light control. However, no rear filters had been manufactured at that time for the magnetic rear element filter retainer. So we spent about a month working with our rental house, SIM Video (now MBS Toronto), and Tiffen to find filters with consistent thickness and density that would work.” 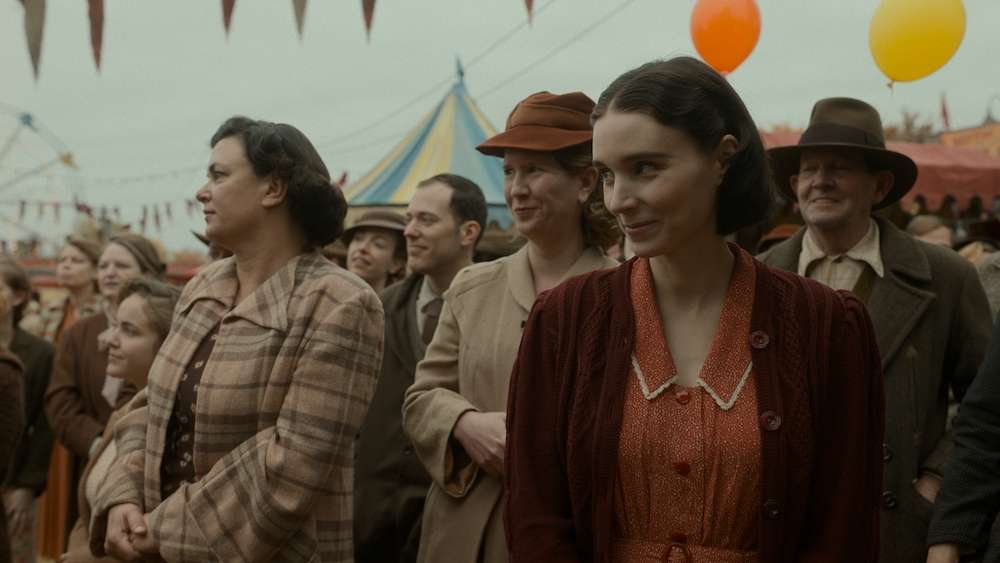 The first half of the movie takes place in the travelling carnival environment, with lots of rain, mud and dark skies – delivering a grittier feel than the later Buffalo sequences. A vintage carnival set, about the size of a football field, was built at a playground location one hour north of Toronto, including huge canvas tents held up by ropes and poles, plus small back-alley areas.

“One of the best things about the huge set was that we could do lighting tests before we started shooting,” Laustsen says. “That was a huge help for talking to my crew and Guillermo about various things.

“Another thing was that my gaffer, Michael Hall, was able to make sure we could backlight everything with Raptor lighting rigs, since the whole thing was so big. Our lighting company, Lux Toronto, made some dichroic filters for us. We could just prop them on top of the Raptors, so that half of the lights were dichroic steel blue and half of them were normal Tungsten, in a checkerboard pattern. That way, I could choose between Tungsten bulbs or steel-blue Tungsten, depending on what feeling we wanted the scene to have.” 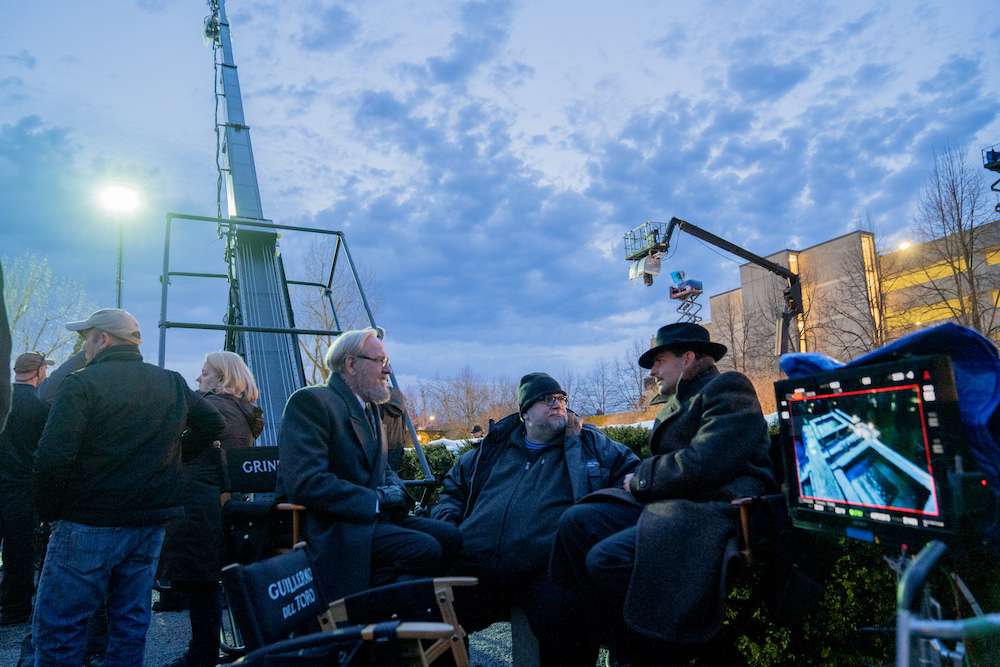 Hall elaborates on that filtering methodology for the bulbs on the Raptor lighting rigs.

“Lux made custom-made steel-blue Pyrex glass lenses for each bulb to serve as the dichroic filtering system,” Hall explains. “We used two x 250ft construction cranes with a rig of eight Raptor lights, all supplied by Dwight Crane in Toronto, on each. We also had six 135ft condors with two Raptors each. That gave us a total of 504 1,000W bulbs, all individually controlled on the dimmer board. That way, we could surround the carnival and adjust light levels accordingly without moving a crane, giving Guillermo maximum shooting time.”

Hall also adds that every light at the carnival was controlled via dimmer board operated by Desiree Lidon, who used a grandMA console with satellite control from her laptop in order to stand next to Laustsen and Hall and make any complicated or last-minute changes on-the-fly as requested. “The big lights on cranes and practicals on dimmer packs were DMX controlled, but all floor lighting was done wirelessly,” he adds.

The lighting team also figured out ways to efficiently light the location during what he calls “the biblical rain scenes” that are crucial to the story. 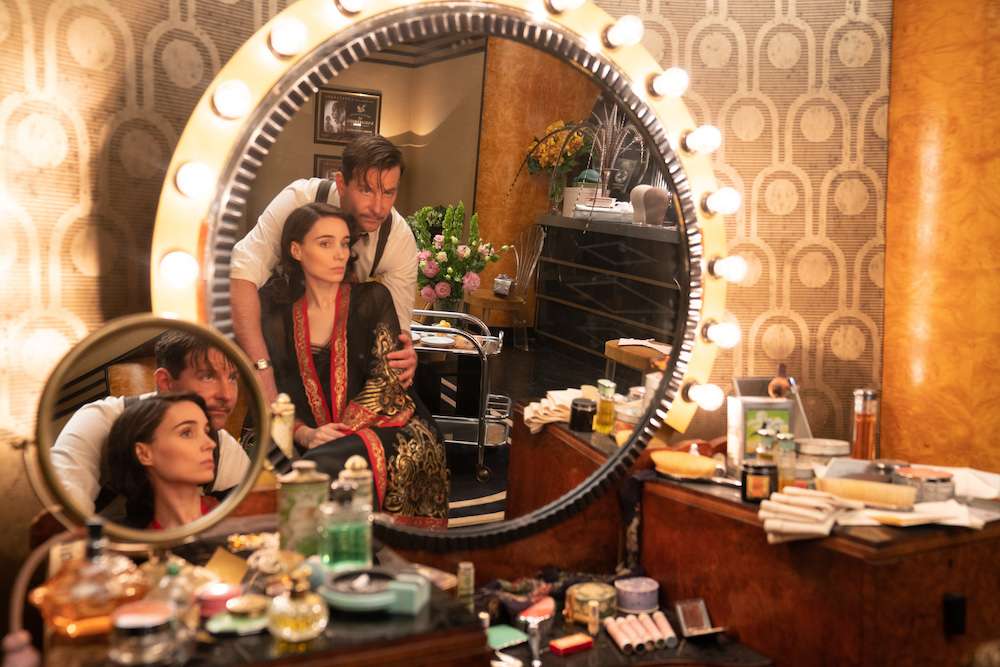 “For the rain scenes, we employed a half-dozen 150K to 200K Luminys Lightning Strikes,” the gaffer says. “A lot of the base lighting was provided by string lights hung throughout the carnival – all 50W clear bulbs, 2,000-plus bulbs in all. For the most part, all the ground lighting was handled by a combination of ARRI s60 SkyPanels and Kino LED Freestyles. For the day scenes inside the tent, we pushed ARRI M90 HMI’s through the tent doorways and flaps.”

The lighting style subtly changes as the story moves to Buffalo and the grittiness of the carnival is replaced by a more elegant look in high-society clubs, such as the Copacabana sequences, hotel rooms, and most notably, in the office of Blanchett’s character. That set required warmer tones and a more glamorous look to emphasise the beauty, power, and mystery of the character, according to Hall.

“The warm tones were accented by interactive firelight in her office, created by a few six-bulb tungsten Spacelights running through the board,” the gaffer explains. “In her office, we would often place Helios or Titan LED tubes set at a very low level to bring out the rich wood and brass accents in the sets. We used ARRI T-12 and 24k Fresnels during the day with a quarter CTS, and for night, we used 24K Fresnels with steel-blue gels and ARRI S60 SkyPanels colour matched to the steel blue gel. 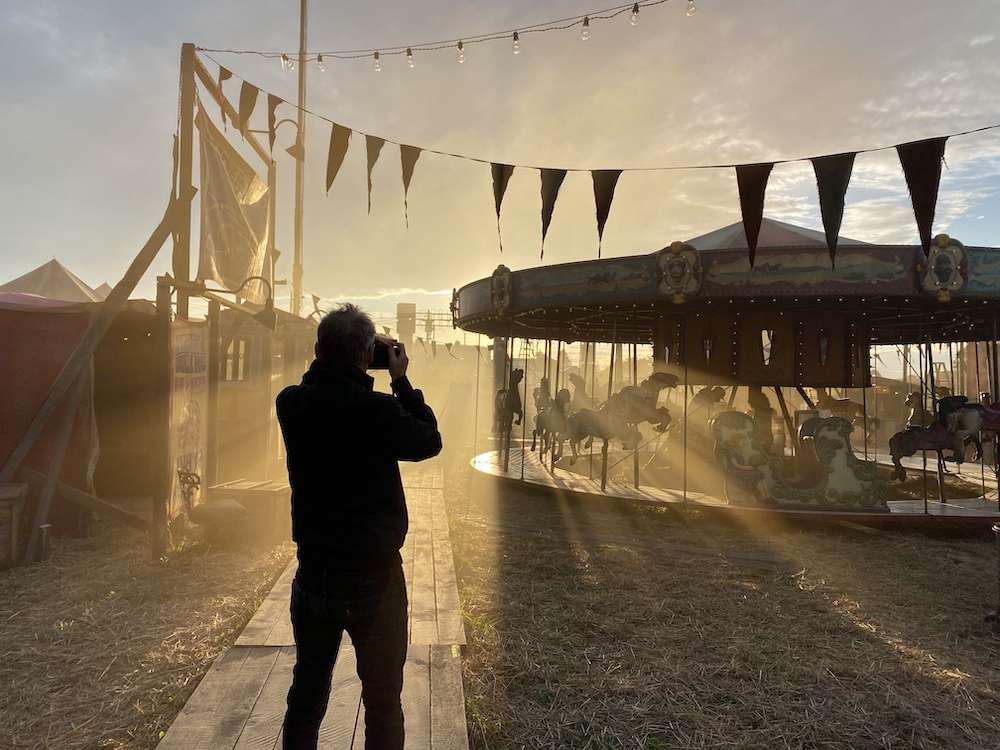 “And then, for the Copacabana scenes, we used Titan tubes and RGBW ribbon to accent all the architectural features in the club, and give the atmosphere there an even illumination, but we also allowed our 2K Molelipso fixtures to really stand out and give it that vintage club look.”

Laustsen concludes: “Guillermo and I know each other so well, and have the same feeling about colours and contrast, how dark or bright things should be – we both like silhouettes – and camera movement. So, when Bradley’s character is sitting on a stool in his hotel room smoking a cigarette, and fire comes up behind him, it was easy for us to agree on a low, wide-angle shot and get it seamlessly in-camera. We both already know we don’t have to see Bradley’s entire face – we want to see his body language. As a cinematographer, it’s fantastic having that kind of relationship with the director.”