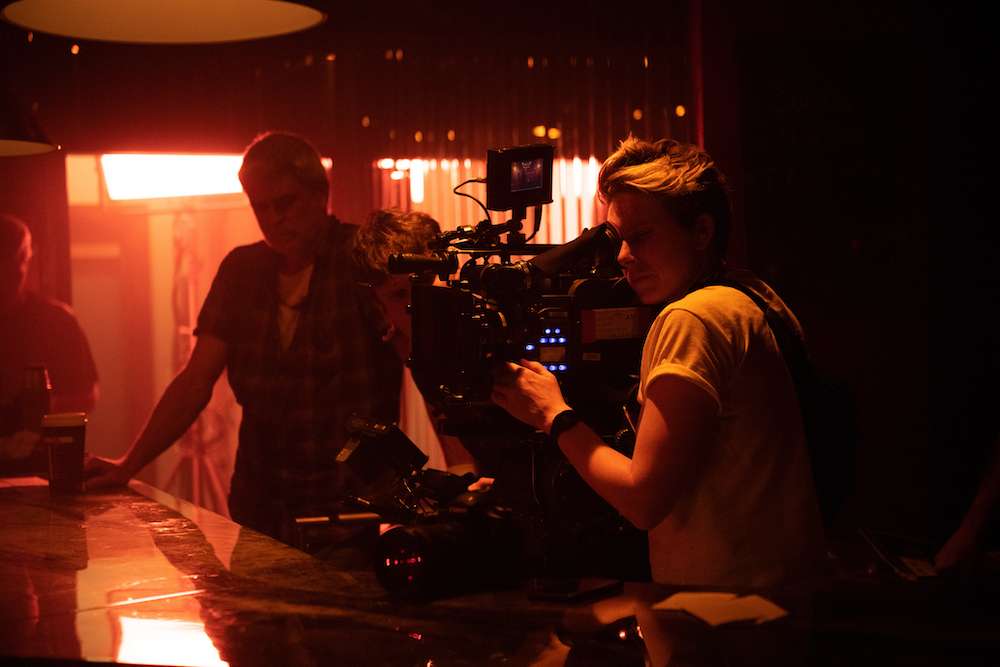 Director of Photography Ari Wegner on the set of ZOLA, an A24 Films release.
Credit : Anna Kooris / A24 Films

The A24 film is based on an infamous 148-tweet thread, posted by Detroit waitress and avid pole-dancer, A’Ziah ‘Zola’ King, on October 27, 2015, in which she related a wild, 48-hour road-trip to Tampa, Florida, involving partying, stripping, prostitution, gangsters and an attempted suicide.

In the movie, adapted for the screen by Bravo and co-writer Jeremy O. Harris, Zola (Taylour Paige) meets Stefani (Riley Keough) while serving her at a restaurant. The two immediately bond over their love of pole dancing and the extra money this earns them. Just a day after they exchange phone numbers, Stefani invites Zola on a cross-country escapade down South, where she promises they can make thousands of dollars for just a few hours of dancing in strip clubs. Zola agrees, but suddenly finds herself partaking in a tense and chaotic odyssey that is actually a ruse for Stefani’s sinister pimp, called X (Colman Domingo), to cash-in on them both. 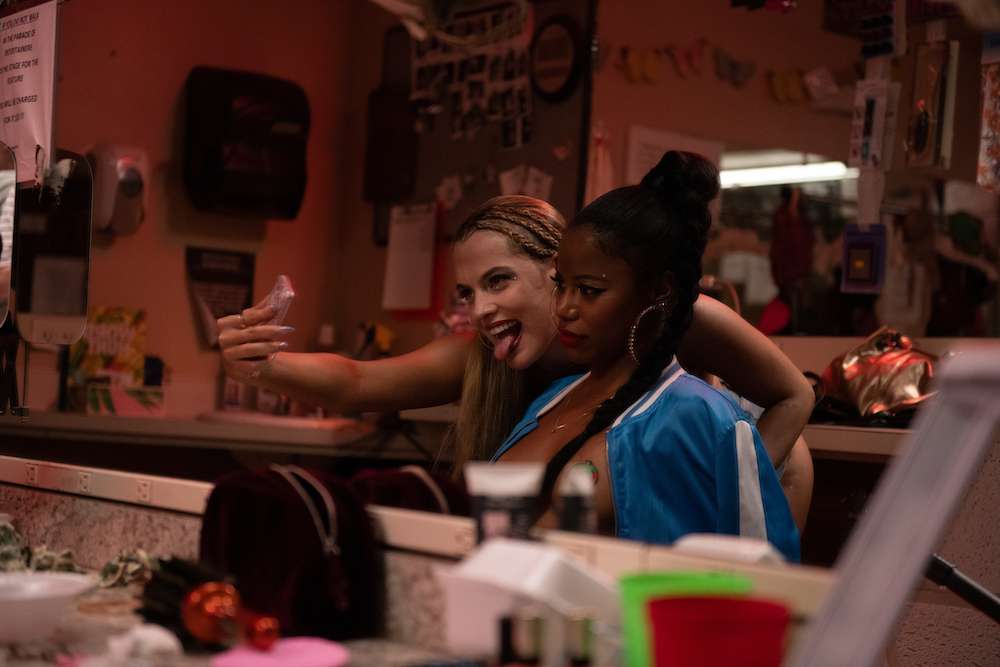 Wegner’s painterly, docudrama-style of 16mm cinematography on Zola has been described as fittingly gritty and visually enticing, with a confident sense of composition and place. Static camera shots reveal ominous depths to the story line, close-up lips are painted deep cherry red, a regular liquor store is reframed with an otherworldly alignment of bottles in rows, and shabby motel suites are lit to become all the more lurid-looking.

Bravo’s previous credits include the award-winning short Gregory Go Boom (2013) and Lemon (2017). Wegner is known for her stark work on Lady Macbeth (2016), hyper-real lighting for In Fabric (2018), punk-style lensing on True History Of The Kelly Gang (2019), and the sense of unease that pervades the pictures on TV series The Kettering Incident (2016).

“Only someone as detail-passionate as Janicza would pick-up on the fact that this was going to be a period film, set three years ago.”

“Janicza is such an exciting and talented director. I saw her film Lemon at Sundance 2017, and thought this is someone I would love to work with,” says Wegner. “We initially met on Skype, and her energy and passion for Zola were electric. The original Tweet thread is an amazing piece of literature, and I loved how Janicza and Jeremy’s script captured the essence of A’Ziah’s super-dark humour – her observations and her voice, and as well as the world of the Internet in 2015, which doesn’t seem like that long ago but in Internet years that’s forever. Only someone as detail-passionate as Janicza would pick-up on the fact that this was going to be a period film, set three years ago.”

Of course, the visual aesthetic of any production does not exist until the director discusses their vision with the cinematographer. 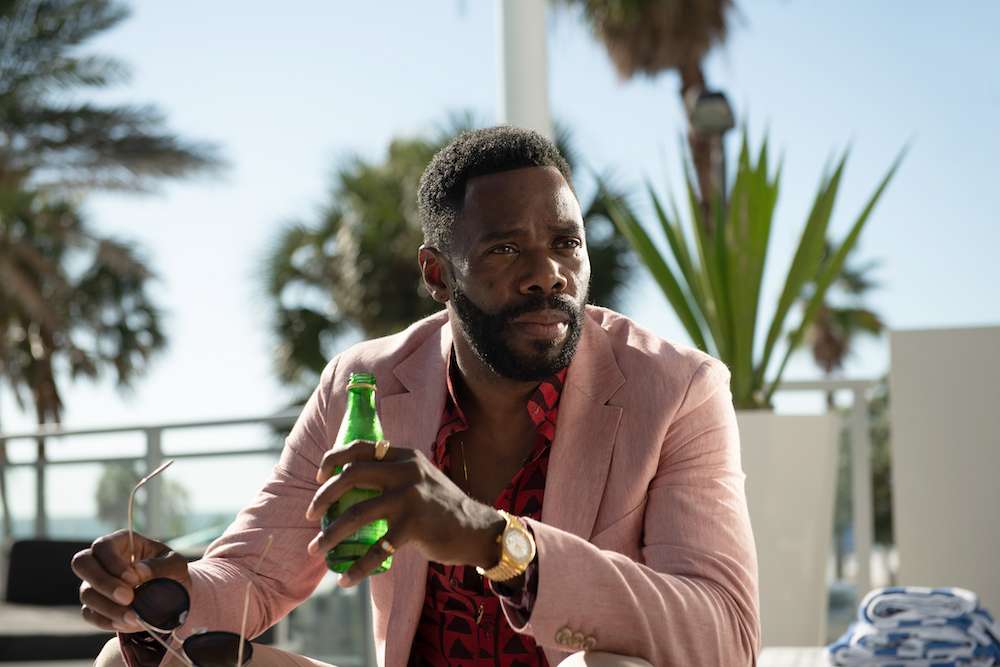 Wegner reveals, “Janicza wanted a look that was playful and knowing, but also uncomfortably real. A look where we could highlight the strength and athleticism of this character, follow her sliding from a dream into a nightmare, with humour her only protective armour.

“Janicza already had a huge library of ideas and images – including vivid colours in William Eggleston’s photographic work and the portraiture by Deana Lawson. However, one reference that stood out as key was Hieronymus Bosch’s triptych The Garden Of Earthly Delights, this became the central touchstone for the visual arc of the film.”

Painted between 1490 and 1510, and housed in the Museo Del Prado, Madrid, since 1939, Bosch’s famous work is comprised of three panels separately depicting Heaven, Earth and Hell, each with its own distinct colour palette. 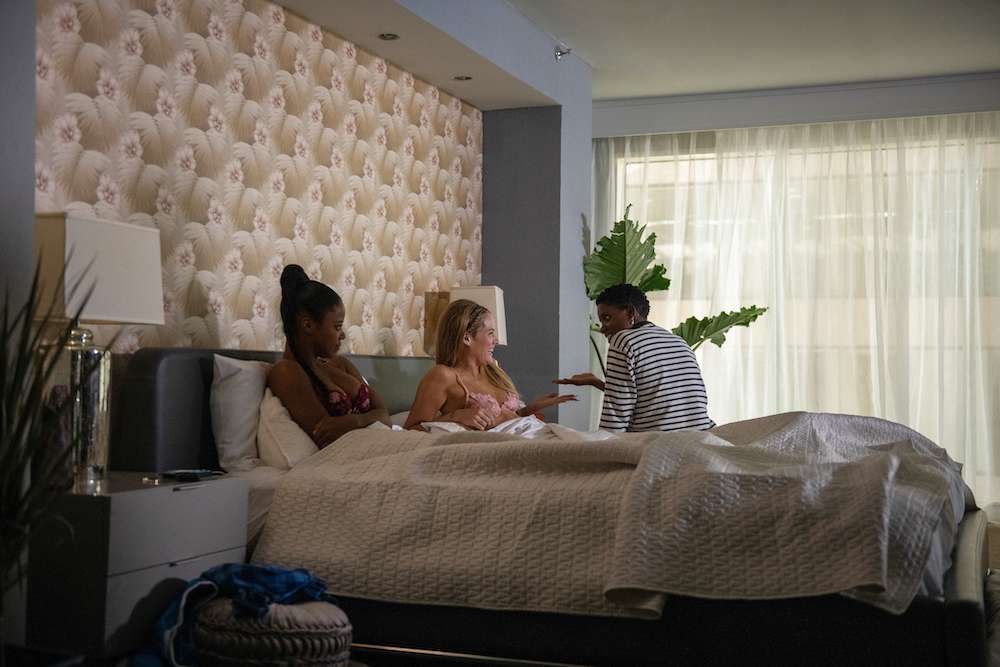 “The Garden Of Earthly Delights seemed to sum-up Zola’s journey in three acts, and served as a reminder as we shot,” explains Wegner, “At the start of the film, when we are in Heaven, our palette was calm, with pastel colours, a marshmallow softness to the contrast. When we enter Earth – moving from Detroit to Tampa – things get busier, vivid primary colours start coming in with a bit more contrast, until we enter Hell, where we meet blackness, and the high-contrast imagery becomes swampy and stressful.”

Production on Zola took place at locations around Tampa over the course of 26 shooting days, during October, November and December 2018.

“It was important to us to shoot in the place where A’Ziah’s story happened.” remarks Wegner, “Plus there is something visually distinctive about the light, atmosphere and colours of Tampa – blinding sun-bleached days and these vivid, humid nights. The road surfaces, the buildings and signage, the types of trees, were all seemingly small details individually, but collectively those details created a sense of place that bind a film together.”

“What I love about shooting on celluloid, especially 16mm, is that it is incredibly real and at the same time heightened.”

Of course, with Zola being a contemporary tale with garish colouring, it could have been considered a dead-cert for digital-origination. However, Wegner reveals that Bravo was dead-set on using analogue film from the get-go.

“There was never any doubt that Zola was going to be shot on film, and for me it was a treat to come back to shooting 16mm,” says Wegner who last shot analogue 16mm film on Winter (2013, dir. Amie Siegel). “What I love about shooting on celluloid, especially 16mm, is that it is incredibly real and at the same time heightened – which actually describes quite well our approach to the film in general. Also, Janicza and I both love how film records skin tones, and this is a film that in many ways is about skin and bodies.” 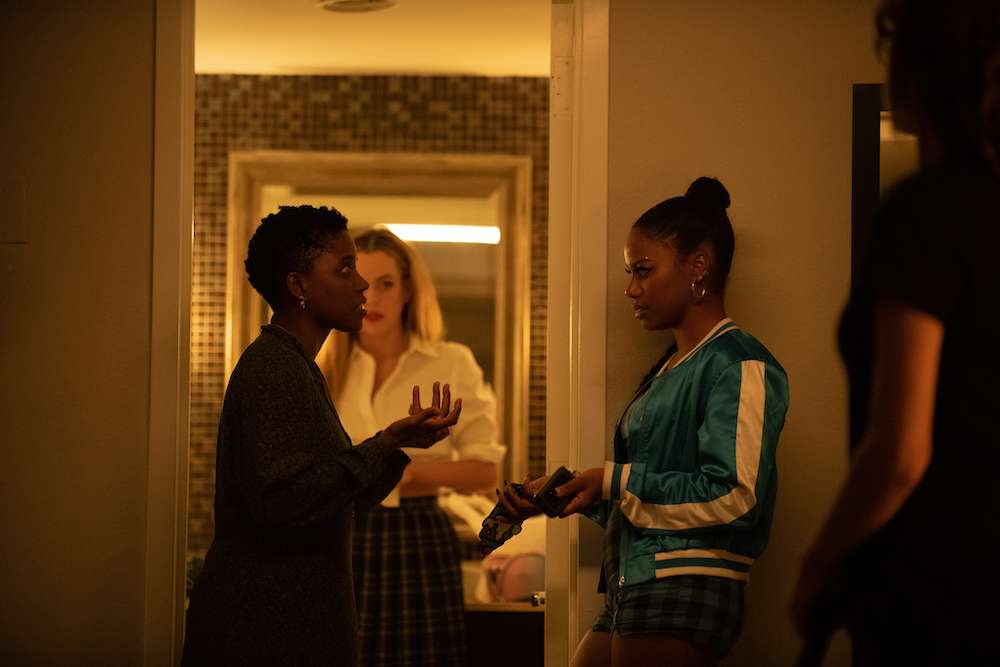 Wegner worked with Panavision in New York and Atlanta to supply a shooting package comprising of an ARRI 416 16mm camera plus Ultra Prime lenses. She went with a combination of KODAK VISION3 7219 500T and KODAK VISION3 7207 250D. Kodak Film Lab New York was responsible for the film processing.

“The ARRI 416 is a beautiful workhorse of a camera – compact, rock solid, intuitive, everything you need and nothing more. I love that camera,” she says. “The Ultra Primes are traditionally a very sharp lens, but when paired with the softness of the 16mm the result is really gorgeous.

“500T was the natural choice for our low-light situations, such as night scenes and many of our interiors, and we shot mostly 250D outside. Whenever I come back to film after not having shot it for a while I’m always so impressed with how robust film stock is, it really does excel when pushed to its limits – in ways that I don’t think digital can match just yet.” 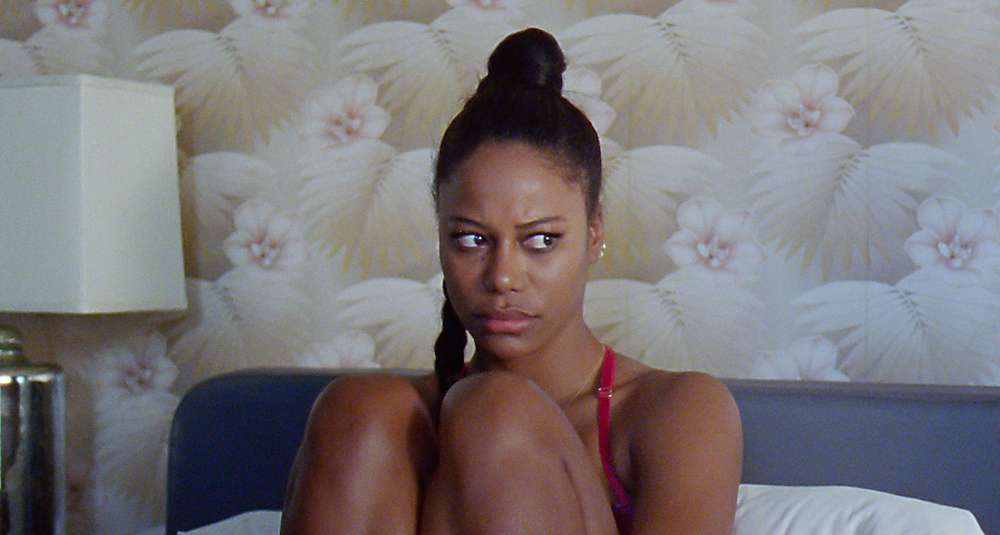 “For example, the intense sun of a day exterior can strike the fear of god into any DP shooting digital. But having an emulsion like the 250D, the highlight roll-off is always going to look beautiful. I also like 250D because it has a nice amount of grain and a wonderful pastel quality to it.”

“Above all, I was blessed to have such a beautiful cast to shoot, and I love how they all look in this film. We often had light and dark skin tones in same frame, and celluloid handles that so well.”

“I wanted that feeling of discomfort to be inescapable for the characters and the viewer.”

“Our day interiors were generally lit with HMIs, to bounce-in natural-looking light,” Wegner recalls, “but for any coloured light we used LED fixtures, such as SkyPanels and Astera tubes, for the many different motel, hotel and club locations.

“This was actually the first time I had lit using an iPad to control the colours and dimmers on DMX, and it was amazing to have a gaffer like Chris who was so passionate about that. The Astera tubes were super-useful for things like our night-time car travelling scenes, where we could rig them up on the outside of the vehicle and design a chase sequence to perfectly match and enhance the existing street lights. As the film progresses we used increasingly discordant colour combinations – intensely saturated tones that don’t sit well together. I wanted that feeling of discomfort to be inescapable for the characters and the viewer.” 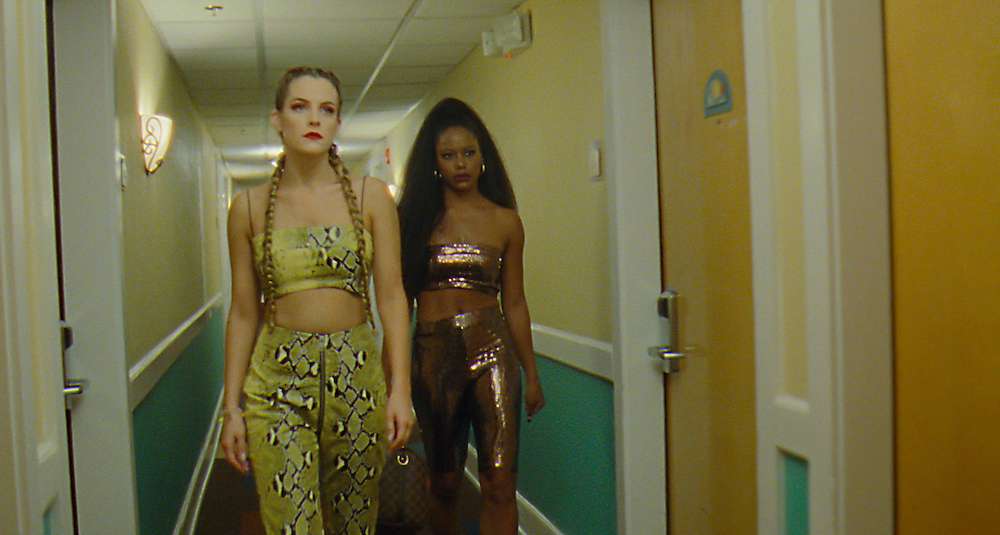 Apart from scenes requiring Steadicam, Wegner operated throughout the production. “It was very important to us that we centered Zola as the storyteller, so we spoke a lot about how to do that visually. We constantly asked ourselves what the best shots were to see the scene from where she was at – not just geographically in the room but as a character – what details she was noticing, what she was feeling. It was essential that a viewer would know what her thoughts and opinions were, regardless of whether or not she choose to voice them.

“Sometimes that required a special shot on Zola, treating her differently to how we covered the other characters in a scene. At other times we did matching shot-sizes on everyone and knew that Taylour’s performance in combination with the editing and score would do that job better.”

“That attention to detail, when all the elements come together is magical.”

The dance scenes, like any dance scene, required some careful planning. “Pole-dancing is incredibly athletic. Taylour trained so hard for that, which allowed us the great freedom to shoot any angle we wanted, angles that wouldn’t have been possible if we’d needed a body double. We wanted to shoot her in a way that captured the athleticism as well as the elegance of what she was doing. To say ‘this is work’, and it’s also incredible, and beautiful. Early-on Janicza mentioned Leni Riefenstahl’s Olympia – Festival Of Nations-and Festival Of Beauty (1938) and that was a turning point for me in understanding what those scenes could be.” 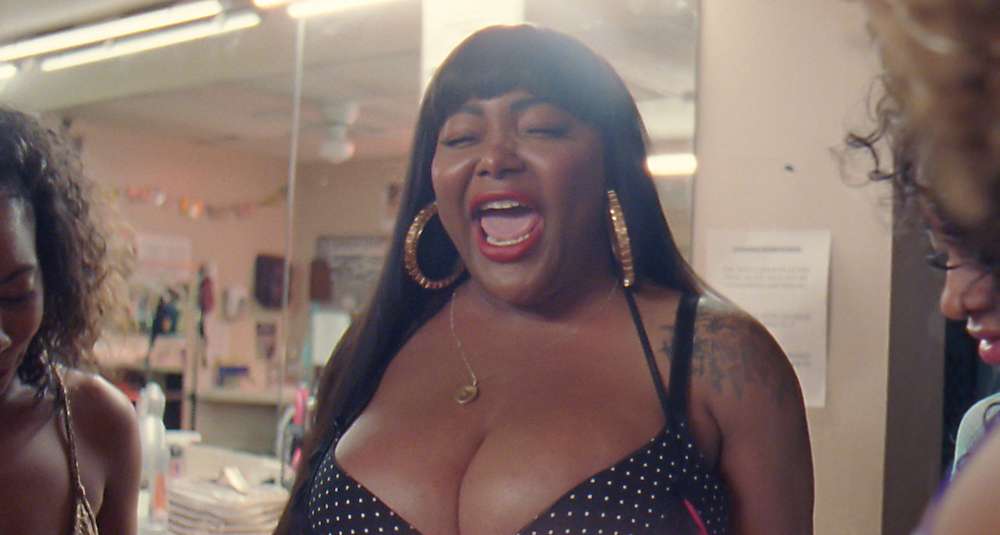 Wegner concludes, ”Janicza is an incredibly energetic and vibrant director, who creates an energy on-set which is simultaneously playful and serious, risk-taking as well as meticulous. She is very detail-oriented across all departments – from props and performance, to the lighting, framing and locations. She has a holistic vision, in that there’s no part of the frame has not been rigorously considered by her. That attention to detail, when all the elements come together is magical.”