2021 was a huge year for cinematographer Alice Brooks ASC. Well-known for her rich, textured photography, powerful compositions and dramatic lighting, she become a member of the American Society Of Cinematographers (ASC), and received rave reviews for her inspired work on In The Heights (2021) the film adaptation of the Lin-Manuel Miranda musical, directed by Jon M. Chu. 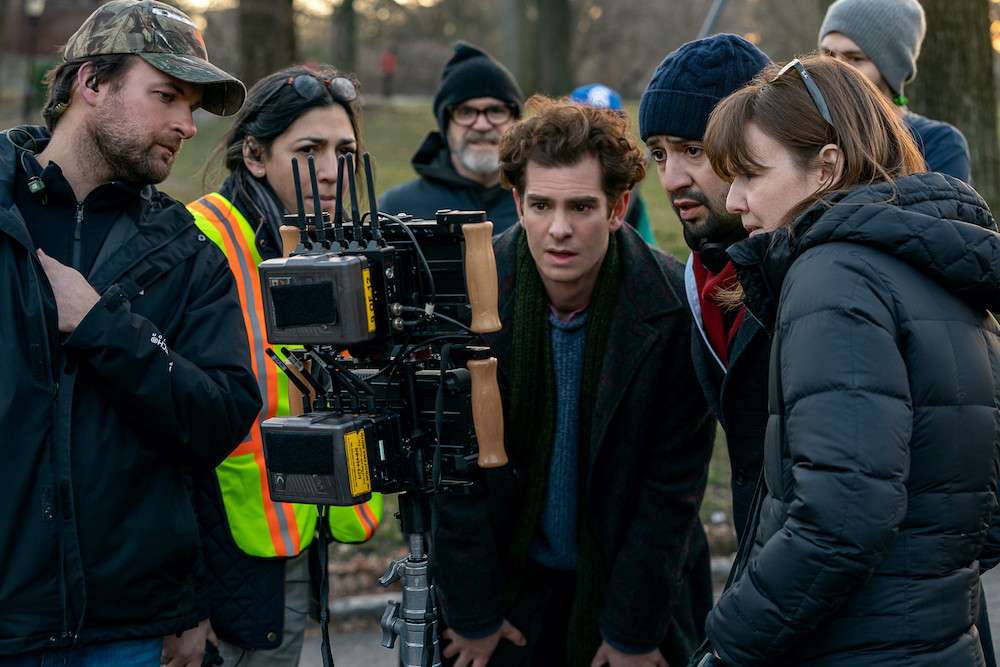 She followed that success with another high-profile project, Tick, Tick…BOOM! for Netflix and Imagine Entertainment. Another musical, it’s directed by Lin-Manuel Miranda, who makes his feature film directorial debut, and produced by Ron Howard. An adaptation of the semi-autobiographical musical by Jonathan Larson (Rent), the film stars Andrew Garfield as Jon, a young theatre composer trying to make it in New York City in the 1990s, alongside a stellar cast that includes Alexandra Shipp, Vanessa Hudgens, Judith Light and Bradley Whitford.

“I grew up watching musicals”

I talked to Brooks about the challenges of shooting Tick, Tick…BOOM!, the cinematography, lighting and working with a novice director.

You must really love musicals, as you’ve shot two in a row now.

I do. I grew up watching musicals. My mom was a singer and dancer and my dad was a playwright. I’d watch all the classic musicals on TV all the time, and I have a huge wealth of knowledge about them. Then later, Jon Chu and I met as film students at USC nearly 20 years ago, and I shot his musical short. That led me to In The Heights and now this.

Talk about how you and Lin-Manuel collaborated.

The first time we discussed Tick, Tick…BOOM! it was just four days after wrapping In The Heights. Lin sent me the script, and immediately I thought, ‘This could be a scene from my childhood.’ 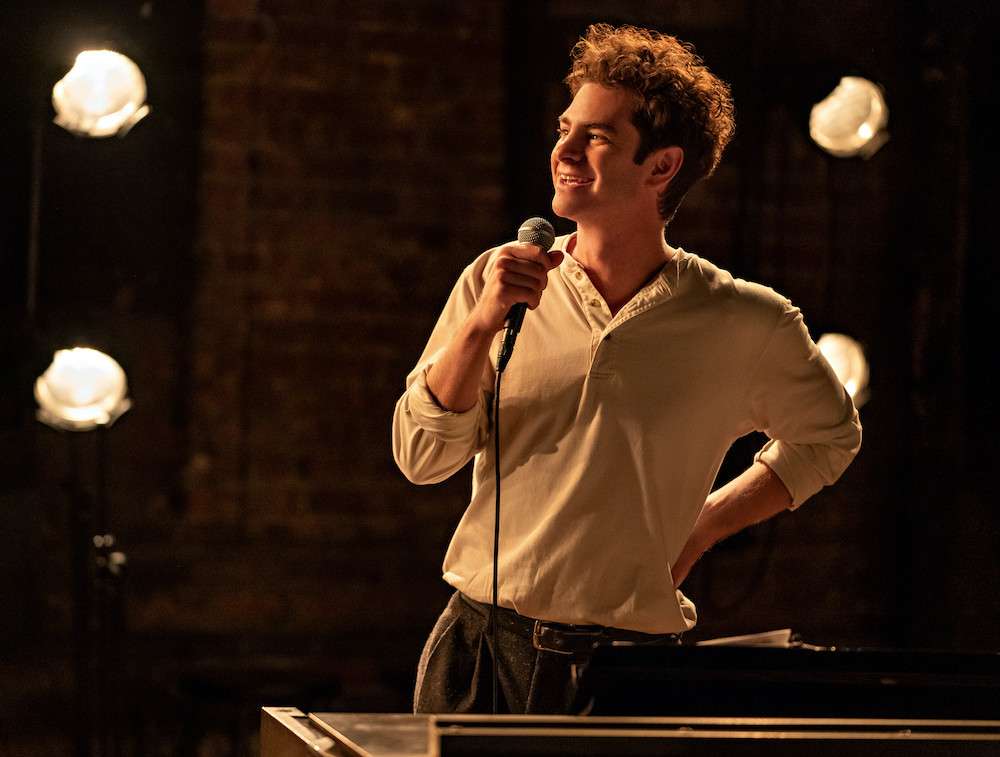 It starts on my birthday, January 26th, 1990, in New York where I spent my first decade, in the eighties. And just like Jonathan, we lived in a 300sq/ft tenement apartment with a bathtub in the kitchen, and the place was always full of my parents’ artist friends who became my surrogate family. And like Jonathan, we also lost a lot of them to AIDS.

So I prepared a lookbook for my meeting with Lin, filled with photos of my childhood. And when Lin saw them, he remarked, ‘These are your personal photos? They could be something right out of the movie.’ Lin and I are the same age and we share the same memories of what New York was like in 1990. So right from the start it was an effortless collaboration.

Turning a stage musical into a film can be quite challenging. How did you approach the look of the movie, and were there any surprises working with him as a first-time film director?

Lin comes from a theatre background where you workshop a play, and we did the same thing. The core team, including me and Lin, the production designer, writer and storyboard artist would sit down for long, in-depth meetings and explore and play with ideas for the look and design. 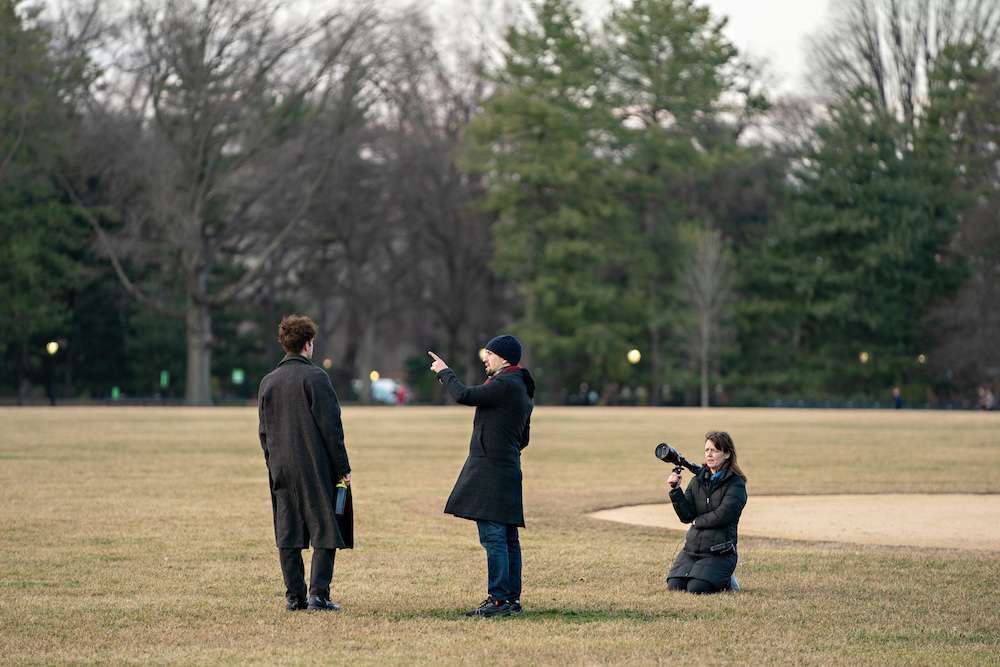 It turned into the most drawing and re-drawing of storyboards ever, because that’s the way Lin works. There was a lot of trying things and back-and-forth until we’d settle on something, so our prep was like workshopping.

How long was the prep and shoot?

We prepped twice, as Covid hit us in the middle. We first prepped for three months starting at the end of 2019, and shot for just eight days before we got shut down for six months. Then we did another month of prep and shot for 42 more days. So it was very strange.

How did you make all your camera and lens choices?

As I do on every film, I tested a ton of different camera packages and lenses. As it was Lin’s first movie I asked him how involved in all that he wanted to be. He said, ‘I want to learn everything.’ So I’d shoot the tests and we’d meet at the lab and project them, and then narrow down our choices.

Interestingly, we ended-up with the same package we used on In The Heights – the Panavision DXL2 with Panavision G-series Anamorphic lenses. The difference is, we detuned the lenses in a totally different way, with the help of Dan Sasaki at Panavision once again. 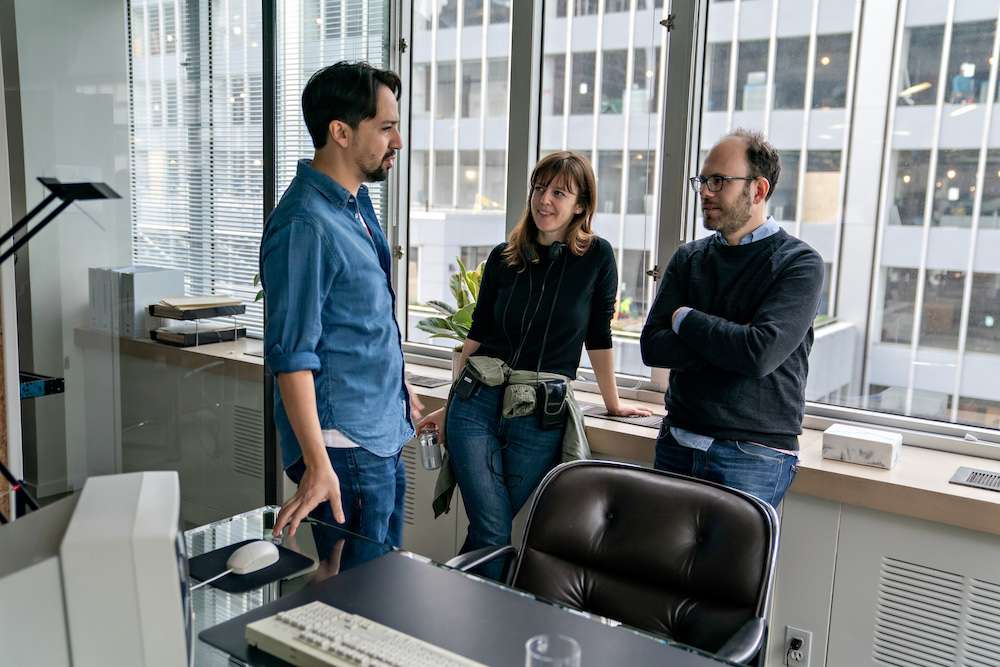 Then after Covid had hit and we finally came back, Netflix and our producers were very worried about us using atmosphere. So I did new tests and Dan stripped more coating off the front of the lenses to age them more and make them more reactive with the light. And then I ended-up shooting with a filter on top of that, a 1/8 Black Promist. And we also used a Betacam for the ‘found footage.’

What about the lighting, as this film’s a lot moodier than In The Heights?

The stage portion was based on the real stage show Jonathan Larson did at the New York Theater Workshop, and we were originally going to build that set elsewhere. But after Covid hit and the theatre shut down, we were able to shoot in the actual theatre and use a lot of their lights and rigging, and we spent nine days there. That brought so much to the project. 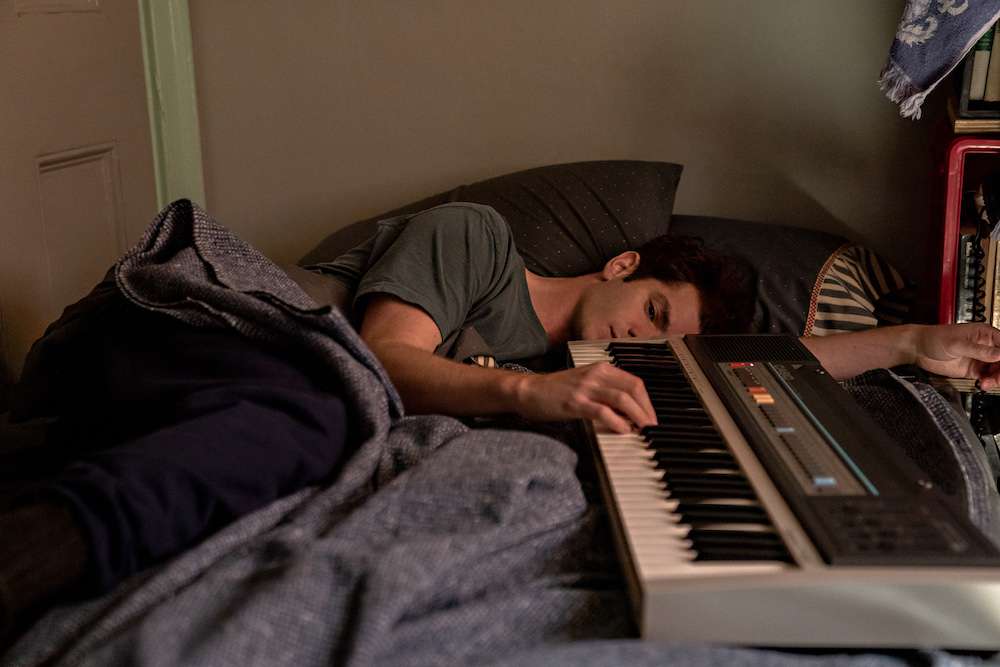 But we had to recreate other locations, like the Moondance Diner where he worked right up until before Rent came out. The wonderful thing was we had so much research material available as a friend of Jonathan’s was constantly recording him and we had eight years’ worth of video – of locations like the diner and his apartment – that we could study. So we were able to recreate all the key locations very accurately.

The film is darker, but the Sunday number in the diner is so joyous and bright. Tell us about that?

It’s the brightest scene in the whole movie, and I used 60 Hybrid LED space lights outside, along with a series of T12s and an 18K, to shoot it. It was inspired by the Stephen Sondheim musical Sunday In The Park With George and Georges Seurat’s pointillist painting, A Sunday Afternoon On The Island Of La Grande Jatte, which is so vibrant and where the colours are so saturated. We wanted that look to contrast with the dark coldness of New York in January. And I love the shot of Jonathan right before this, where we did a hand held push-in on him doing his introduction to the song.

Did you work with a colourist in prep on any LUTs?

Yes, I worked very closely on the LUT with a great dailies colourist, Dustin Wadsworth, in conjunction with colourist Stephen Nakamura who did the final DI at Company 3 in New York, where we also did all our dailies. And then we had a wonderful DIT, Abby Levine, who worked on the CDLs for each scene. So, for instance, on the Sunday sequence, we over-exposed the image, and then in the CDL we brought down the exposure, which it gave the material a sort of heightened plastic quality with skin tones that were a little smoother and more vibrant. 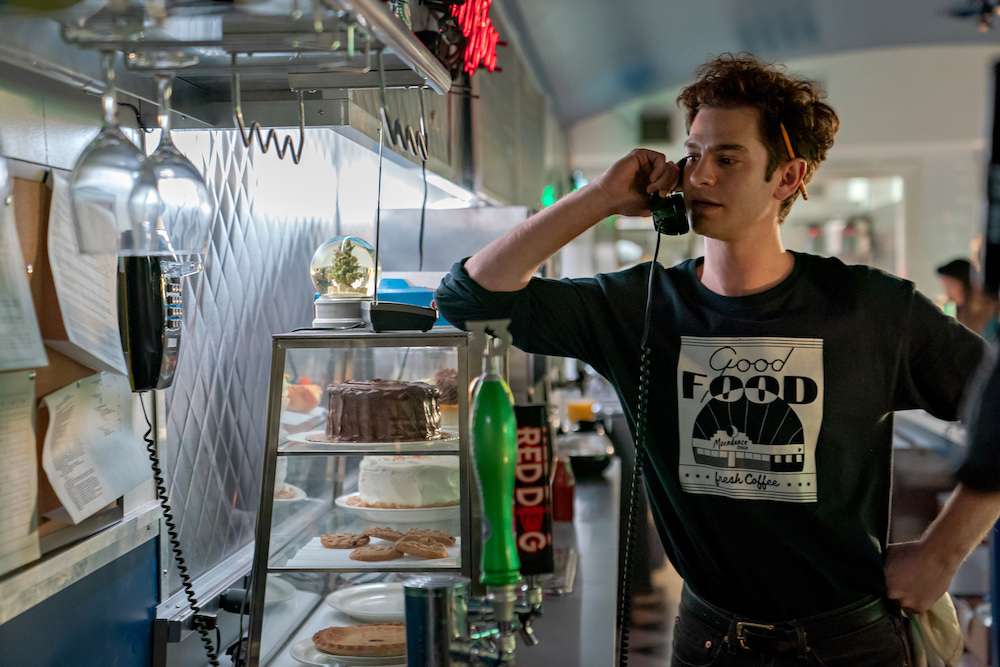 You shot a bravura Busby Berkley-style opening sequence for In The Heights, and another, but very different, pool sequence for this. You must be becoming an expert at shooting in swimming pools!

(Laughs) I think I am! This scene was by far my favourite – the biggest challenge and the most rewarding. It’s a wonderful demonstration of a single moment of genius for Jonathan. We found this amazing pool in the West Village which had tile lines on the bottom that looked just like music staff paper lines. I took all these underwater shots with my iPhone and we noticed that the No.30 tile was at the very centre. Lin had the idea of Jon touching the 30 tile marker, which was also the age he was so afraid of turning. And only later did we find out it was the same pool that Jonathan had swum in every day.