Most people are not familiar with modern stereography and still associate it with the old tacky 1950s 3D movies. Doublevision Publishing hopes to change their thinking and embrace the amazing benefits of modern 3D viewing in its red-cyan form that can create outstanding, beautiful often surprising images.

Doublevision Publishing features the amazing stereographic images taken by professional travel photographer Ethel Davies since 2004. In that time Ethel’s travelled much of the world. Grouped in themes, with the idea that 3D photography is not a gimmick, but an unexploited fine art medium, these books show off the virtues of such a format.

“At the moment, no one else is doing this kind of work, at least not on such an upmarket scale. Hence, my setting up the publishers. There is incredible potential for this kind of photography. Organisations such as museums, galleries and theatres, would find particular benefit,” says Ethel.

There are currently four books available in the series by Ethel Davies with more to follow shortly. Each one comes with a free pair of 3D glasses.

THE LONDON POSTCODE BOOK IN 3D

This is a unique fine art photography work that doubles as a guidebook. Taking the viewer on a tour of London and its neighbouring towns, the city is depicted via three-dimensional views of each London postcode district.

‘Across the USA’ is a fabulous road trip documenting a year’s journey in a motorhome across the United States. It’s a personal exploration in which Ethel decided from the start to try stereography. Following in the footsteps of the great photographers of the past, the entire country through which she passed was photographed in 3D. A comprehensive journal compliments the 167 full-colour images.

While experimenting with stereography, Ethel discovered that architectural photography is extremely effective in the 3D format. This book shows off buildings as they have never been seen before. Though the images are stunning as they are, when the red-cyan glasses are donned, the pictures seem to jump off the page. The 72 full-colour pictures really do make you feel as if you are actually there.

SOMEWHERE TO BUILD A DREAM ON

Do you want to escape, to get away from the stresses of the day and have a moment to yourself? This book takes the viewer on a wonderful journey to idyllic locations in three dimensions. Put on the glasses and get lost in these 72 full-colour images.

“This isn’t 3D as gimmick, this is 3D as art and it is riveting.”- about ‘Across the USA,’ William Gallagher, Deputy Chair, Writers’ Guild of Great Britain.

“Your wonderful book arrived yesterday – it’s absolutely beautiful and an incredible achievement on your part.” – about ‘Somewhere to Build a Dream On,’ Martin Wimbush.

An American from California, Ethel Davies has been a London-based photographer since 1974. She became a travel photographer on the completion of a four-year course in professional photography. 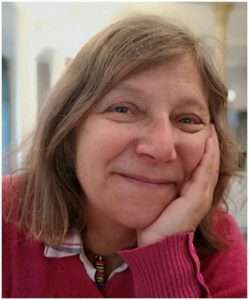 Although practised in the professional and commercial side of photography, she developed a keen interest in computer-aided imagery and completed an MA in Digital Art. She has lived on a narrow boat in the Regents Canal and it was her photographic images of the canal, submitted for her MA, that led to an exhibition at the Canal Museum in Kings Cross in 2012.

What set these images apart and made them exceptional and distinctive was that they were produced in 3D.Viewed through red/cyan glasses, the images leap off the wall and appear to be in the room with you. The publicity generated from the King’s Cross show led to an exhibition of her 3D photographs at the Tapestry Gallery in London’s West End in March 2013. This exhibition included photographs shot in the UK and abroad.

Ethel has worked for many commercial companies as well as other publishing houses and has written three other books published by Thomas Cook and Bradt.

Having set up her own publishing company Doublevision Publishing in 2020, the photographer now immerses herself completely in shooting 3D images that she continues to produce to this day. There have been several exhibitions of her work in both 2 and 3 dimensions, in solo and group shows. Both formats are in museum and private collections.

As a photographer Ethel has contributed to a number of photo libraries and is represented in a number of others. Her photographs can be accessed on line at www.3dphotolibrary.com

Ethel Davies four 3D books are published by her own company, Doublevision Publishing, and are available at Amazon in and from their website in paperback: ‘THE LONDON POSTCODE BOOK IN 3D’ (ISBN 978-1916326330) and ‘ACROSS THE USA’ both have a RRP of £24.95 while ‘VIEW ASKEW 3D – ARCHITECTURE 1 (PORTRAIT)’ and ‘SOMEWHERE TO BUILD A DREAM ON’ have RRPs of £19.95. Full details here and here