Luis has been part of the Digital Orchard team working as a DIT and on-set colourist for feature films and HETV for several years; he will now be making the move across to full-time colourist based at Digital Orchard’s unique post-production facility in Chalfont St Giles.

With a degree in cinematography from the Argentine National Film School, Luis began his career in film as a video operator and high speed operator. He later trained as a DIT in the U.S. He has spent the last decade as a DIT and on-set colourist working on more than 140 commercials, features and TV series across a number of countries.

Over the past year Luis has been transitioning from his on-set role to that of a colourist. Having facilitated cinematographers in achieving their creative vision whilst grading on-set for many years, becoming a full-time colourist was the next natural step for Luis.

Supporting Luis in his move from on-set to grading, Callum Just, company director of Digital Orchard:

“It has been a pleasure following Luis’ journey over the last few years. He has a great artistic eye and exceptional technical abilities, paired with an incredible work ethic and down to earth attitude. He has gained appreciation and recognition across the industry and we are delighted to be able to support his progression within our company; we are excited to see him flourish as a colourist.”

Digital Orchard will be behind Luis every step of the way, facilitating close collaboration with production and supporting all parties throughout, allowing Luis and the cinematographer to focus on their work, with Luis delivering his boundless creativity and skill from the initial visual look design right through to the final grade. 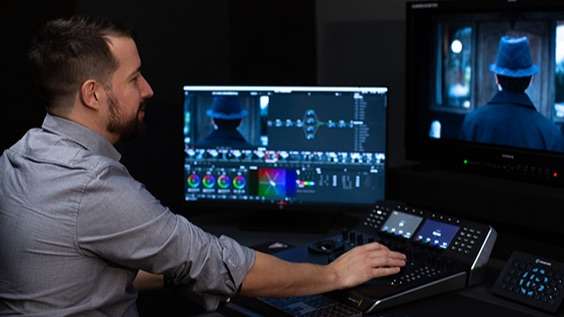 Mark Patten, BSC: “Luis is a consummate professional. I have had the pleasure to work alongside Luis for over seven years, his eye for colour, tone and overall aesthetic is second to none. His input into creating depth in the image is invaluable across all genres from Morgan to the twist of 60’s London in DC’s Pennyworth. His dedication to the inception of any project through to final colour makes Luis a unique talent.”

Si Bell: “Luis is one of the best colourists I’ve worked with. Passionate, creative with a love and care for film making and cinematography that really comes out in his work.”

Dave Miller: “Working with Luis was an absolute pleasure. We created some really strong and unique looks and I hope to work with him again in the future.