Dariusz Wolski ASC on News Of The World

Read All About It

Whilst director Paul Greengrass addresses themes about personal discovery, belonging, the power of fake news and propaganda, in News Of The World, he has also, together with renowned cinematographer Dariusz Wolski ASC, fashioned what has been described as a “fresh take” on the classic road-trip Western and “one of the most beautiful films you can see” – a winning combination of heartfelt performances, meticulous period recreation, tense shoot-outs, dramatic dust- storms, shadowy interiors and sweeping vistas.

Based on the best-selling novel by Paulette Jiles, and set in 1870, five years after the American Civil War, the $38million movie follows Captain Jefferson Kyle Kidd, played by Tom Hanks. A widower and veteran of three wars, he moves from town-to-town as a non-fiction storyteller. For a few cents per person, he shares news amongst the mainly illiterate locals about presidents and queens, fantastic feuds, devastating catastrophes and gripping adventures from both the near and far reaches of the world.

Travelling across the dangerous plains of Texas, he comes across a brutal murder and discovers Johanna, played by Helena Zengel, a blonde 10-year-old, who was taken-in by the Kiowa, a native America Indian tribe, and raised as one of their own. Johanna, who was being returned to her biological uncle and aunt, does not speak English and is hostile to a world she has never experienced.

Kidd takes it upon himself to deliver the orphan wherever the law says she belongs. As they travel hundreds of miles through unforgiving wilderness, they face tremendous challenges against human and natural forces, searching for a place they can call home.

Wolski is a regular cinematographic collaborator with Sir Ridley Scott on movies such as the 3D-stereo Prometheus (2012), plus The Martian (2015) and the upcoming The Last Duel (2021), and who has also shot four features in the Pirates Of The Caribbean franchise. 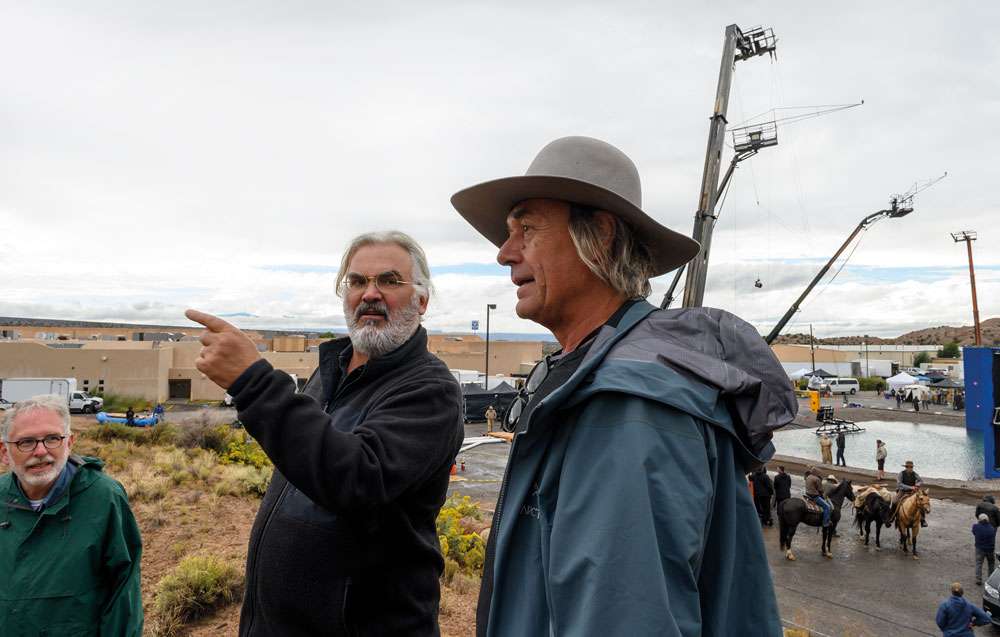 Recalling his path to working on the movie, he says, “Although I met Paul very briefly when I was shooting Sweeney Todd: The Demon Barber of Fleet Street (dir. Tim Burton) and he was making The Bourne Ultimatum (200 7, DP Oliver Wood ASC), I had never worked with him. “He called me out-of-the-blue, and we initially just talked about how you crack the Western these days, without veering into sepia brown, and minus any typical saloon scenes and crane-up shots to reveal a beautiful landscape – which I found quite interesting and novel. He wanted to get away from all that, and to bring his signature documentary approach to the storytelling. We come from completely different filming backgrounds, so we tried to find something in-between that could take the Western further.”

“I like the way the more recent Westerns have been shot by modern cinematographers,” he remarks. “It was interesting to see how naturalistic Roger and Benoît went with things like lighting with candles, hurricane lamps and campfires, but to not take anything directly. Whilst you can load yourself up with images before you shoot, it is best then to do your own thing.”

“When we were prepping in the summer, there were occasions when it was sunny, but with super-black clouds and huge lighting storms in the background,” he remembers. “Although we missed out on that, we were very lucky to shoot in the Fall, when the sunlight is a little bit lower in the sky. The sunsets are beautiful and when the action is front-lit the image looks natural and interesting.”

Wolksi also admits that, “Normally on a movie of this ambition, I like to spend my prep time on location recces, talking to the production designer, designing scenes and blocking the action. But Paul has a different approach. He doesn’t like location prepping and wants to maintain the element of surprise and spontaneity in his filmmaking. That was a little troublesome for me at first, but, to make it work, we found something that also embraced my own visual sensitivities – a more restrained, subdued style, not as ostentatious as his previous movies – and he was happy to go that way.” 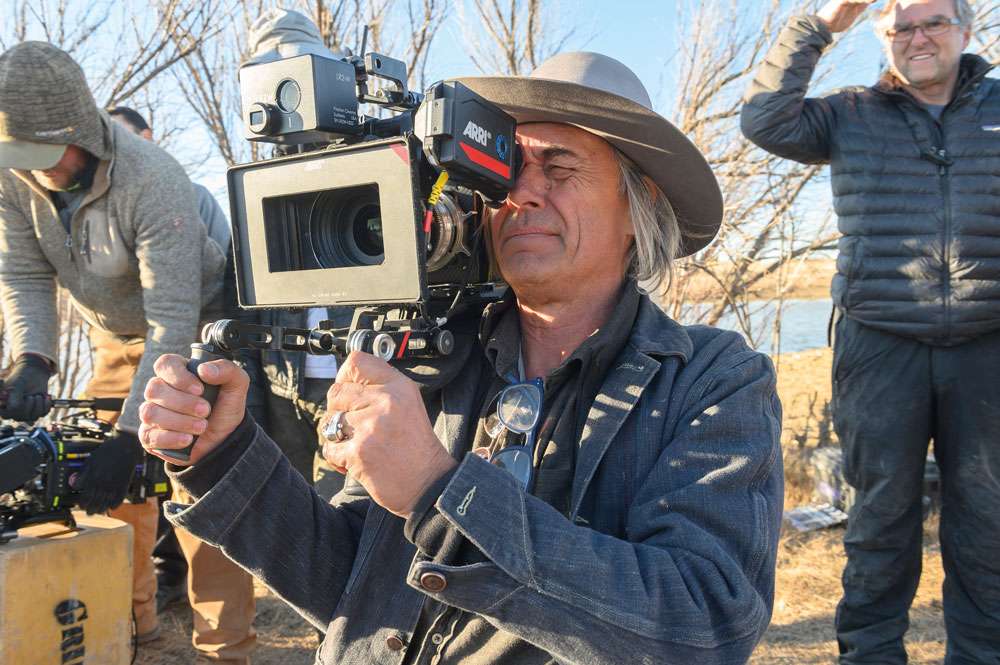 Wolski framed News Of The World in classic Western 2.35:1 aspect ratio, using ARRI Alexa Mini LF cameras fitted with spherical prime and zooms lenses, shooting either handheld or on Steadicam for pretty much the entire movie. He has some illuminating things to say about how he chooses his camera packages, and why reliance on primes is based around old-fashioned thinking.

“I have been through a lot of digital cameras during my career,” he explains, “such as the 5K Red Epic that was still in the prototype stage when I shot Prometheus in 3D-stereo. We shot that movie using four separate rigs – two with Angenieux Optimo 16-40mm short zoom lenses on them, the other two with longer Angenieux Optimo 27-76mm zoom lenses. This set-up meant we didn’t have to worry about time-consuming lens changes with primes, because we were always ready to roll and react between wides, mid-shots and close-ups. I fell in love with those zooms back then.

He continues, “I went with the Alexa Mini LF, as I wanted to go larger format, but felt the Alexa 65 and Red 8K cameras would have been too much. The ARRI sensors produce a solid filmic image at 800ISO on normal day exposure, and the image looked absolutely fine when I pushed to 1280ISO in super-low light levels, like our many fire and candle- lit scenes.

“I used Panavision PVintage Primes for our extremely dark scenes, as they are fast and have a smooth organic look. I used the same Angenieux Optimo 16-40mm and Angenieux 27-76mm zooms, that I used on Prometheus, for the rest of the film.

“Most DPs prefer primes, and would not entertain shooting large sections of a movie using zooms. But, the reason for using primes is based on an antiquated concept. In the 1970s zooms were really bad – soft, with no contrast, and they would continually need maintenance as they kept falling out of focus – that’s why DP prefer primes today.

“But that’s really not the case today, zooms are very well made now. Of course, some modern zooms are too sharp, and some have lots of elements that create flares all over the place. The Angenieux zooms are not too sharp. They soften the sensor and flare proportionately. If you have overexposed light sources, like a window, they just halo in a perfect way. I think many DPs have sought- out Anamorphics to solve the sharpness problem, but these zoom lenses to do the same thing, and without the need for filters.

“In production, using zooms means it is easier and faster to reframe a shot. Also, I really don’t mind slowly zooming in on a face, rather than doing a push-in on a dolly track. There’s nothing wrong with that and it is faster and easier too. Essentially, zooms simplify things and, being lightweight, they are good for protracted documentary handheld- style. Using them means you are open and flexible to opportunities. Even though Paul and I come from completely different filming experiences, that was something we had in common.”

In the main, News Of The World was a two- camera shoot, with Martin Schaer on A-camera and James Goldman working B-camera/Steadicam. The production’s gaffer was Orlando Hernandez gaffer, with Ryan Nguyen the DIT. Wolski sometimes operated a third camera, to capture the crowd responses in some of the scenes when Kidd relates the news.

Whilst many cinematographers develop LUTs to help create a particular aesthetic look, Wolski says, “That’s not for me. It’s unnecessarily complicated and is another mythology. I prefer to create the look in-camera through the set decoration, wardrobe, make-up and lighting design.

“Like any DP who came from film, I was originally very resentful towards digital technology. So on digital shoots, I have always worked with my gaffer to decide the colour temperature of a scene, and my DIT to do simple on-set grading of the dailies using a basic LUT. It’s not that far removed from when you lit the film negative colour-timed the rushes at the lab. Essentially, I grade the movie as we go along, and the film is close to the final look when we get into the DI. That’s the best place to control a sky, or adjust a face up or down a little.”

Wolski says he has been a big fan of LED lighting since using it to imitate candlelight on Pirates Of The Caribbean, using LED strips in custom-built troughs, with gels to mitigate their green hue and dimmers for flickering effect.

“Of course, these days there’s a wide range of good LED lights available, and Orlando built very nice modular lights with dozens of LED panels on a crane to create moonlight or broke these down to smaller configurations for the sets. Whilst I supplemented some of our magic hour and darker night scenes with smaller LED units, I tried to light them with as much natural light as possible, especially hurricane lamps, fire and candles.

“However, outside, on exteriors, I just don’t believe in lighting at all. If you have great weather, like we did, don’t mess with it. I always go with what nature gives me – sunny weather looks beautiful, cloudy days can look beautiful too. The dust storm scene, for example, when you just see the shapes of the characters, is one of my favourites. We shot late in the day and had black clouds in the distance, but the lighting was essentially God’s doing.”

The movie was DI graded by Stefan Nakamura at CO3, Wolski’s longtime colourist, starting with and SDR version before creating the HDR.

“For me there’s OK HDR and even worse HDR. Personally I don’t like it,” Wolski declares. “There is no reason to make everything so bright and explosive. Stefan did a great job in softening-out the HDR, making the highlights look real and pleasant, bringing the whole thing down to what I felt the film really should look like.”

Wolski concludes: “News Of The World is a good example of how you can make a good- looking film with simple resources – no cranes, no big lights, convenient zoom lenses, uncomplicated camerawork. It was all pretty straightforward, and shows how you can do so much with so little.”