Based on the dramatic events that unfolded during the 1968 Democratic National Convention in Chicago, and the following six-month-long show trial of the leaders of countercultural and anti-Vietnam protest groups that were present there, screenwriter Aaron Sorkin’s sophomore directorial effort was by all means an ambitious undertaking.

The main challenge was not to recreate the poignant past, but to make a tumultuous event from half of a century ago resonate with modern audiences. Also, Sorkin was stepping into the shoes of Steven Spielberg for whom he had written the screenplay back in 2007 before the Writers Guild Of America strike sent the project into a lengthy limbo. 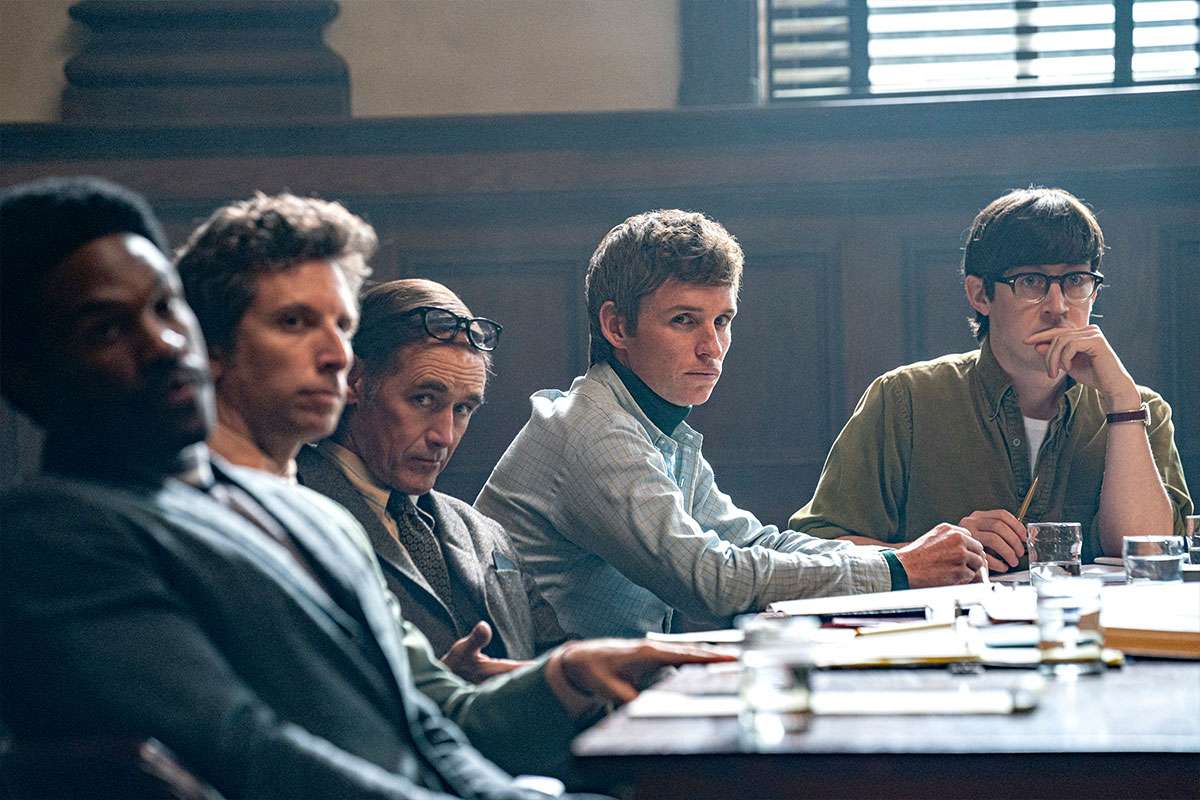 Sorkin and his producer Stuart Besser chose veteran DP Phedon Papamichael ASC GSC to infuse the dialogue-laden ensemble courtroom drama with a visual flair – to create images that would be as powerful as the words being spoken.

“For Aaron it was all about language and pacing,” says Papamichael. “During takes, rather than watch, he often preferred to close his eyes and listen. I would say that normally a film gets made three times: in the writing, in the shooting, and in the editing. With Aaron it gets made in the writing. On our first meeting he said he’d rely on me in terms of the visual language. He’s a brilliant storyteller, but he’s perhaps not as technical in executing it cinematically as other directors such as James Mangold or Gore Verbinski. It gave me a lot of freedom.”

With about 60 per cent of the film being set in the courtroom where ideas, worldviews and egos clash, Papamichael looked for a diversity of approaches 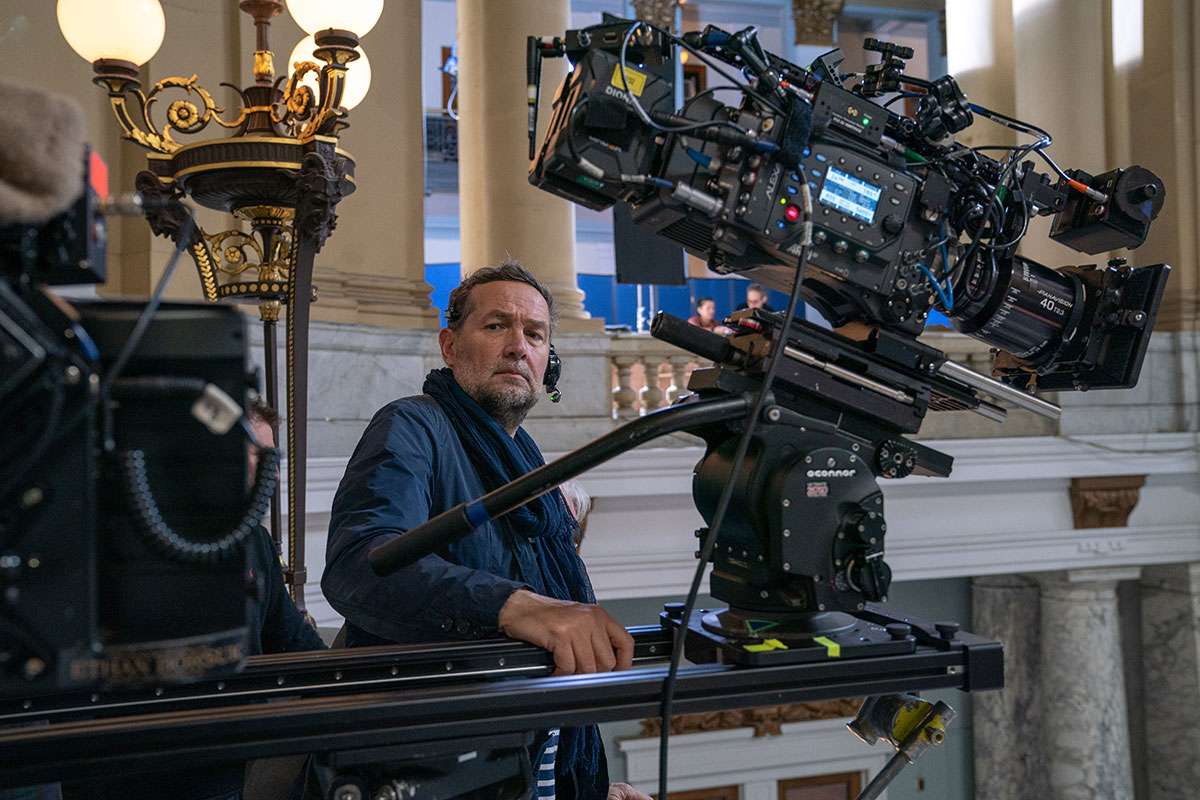 “Out of the 35-day shoot we spent, I think, 12 days in the courtroom. I didn’t want the film to be visually repetitive. I had three cameras and placed them in as many different places as it was reasonable given the story. Blocking was obvious, defendants and lawyers don’t switch seats all of a sudden, but isolated close-ups would not work. I tried to go wider even in reaction shots – you know, to put the players who needed coverage, and we had a lot of them, in a larger context.”

Apparently, the dynamic between the A-list actors themselves on-set resembled the one between their on-screen characters. “Sacha Baron Cohen: always eager to improvise, Jeremy Strong: all about method-acting. Mark Rylance: trained theatre actor/director. Eddie Redmayne: classic British school, very structured. Joseph Gordon-Levitt: strong personality, always ready to go. They’re all brilliant, although it was very difficult to balance them as a group,” admits the cinematographer.

What Papamichael did to make individual scenes stand out, was to assign different looks for different days of the trial. This meant that even with overlapping timelines, as well as the courtroom drama being intertwined with frequent vignettes from the demonstrations, the audience could feel a sense of progression. 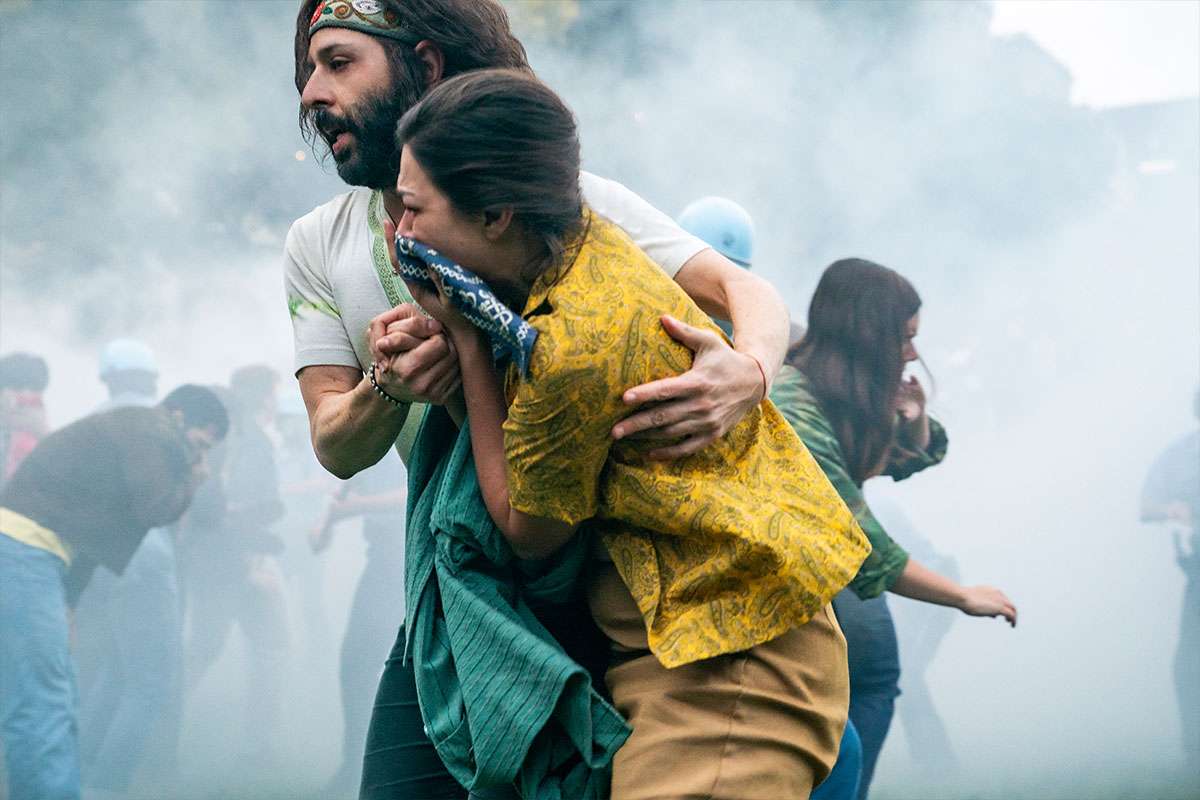 “I built this huge lightbox outside the two bay windows so I could switch over quickly to different set-ups,” Papamichael explains. “Sometimes a courtroom day was one line in a scene that was sunny, then we immediately shot a courtroom day that was overcast and the scene was sixteen pages.”

The courtroom was built on location in an abandoned building in Patterson, New Jersey, which Papamichael made like a stage. Even with such an amount of control, there were issues to be dealt with.

“The biggest problem was I didn’t have extras to fill the courtroom, so I was nowhere near shooting chronologically. I was block-shooting. Three scenes towards the judge, then three scenes toward the jury, then we had to film all the scenes with an actor who could be on set this day only. It was a big puzzle.”

The most important exterior in The Trial Of The Chicago 7 was Chicago’s Grant Park, where the 1968 protests took place.

“We were lucky. A lot of architecture is still the same. Aaron was not particularly interested in authenticity, he was rather after the essence of the story and making the subject matter relevant, but shooting there really helped,” says Papamichael. 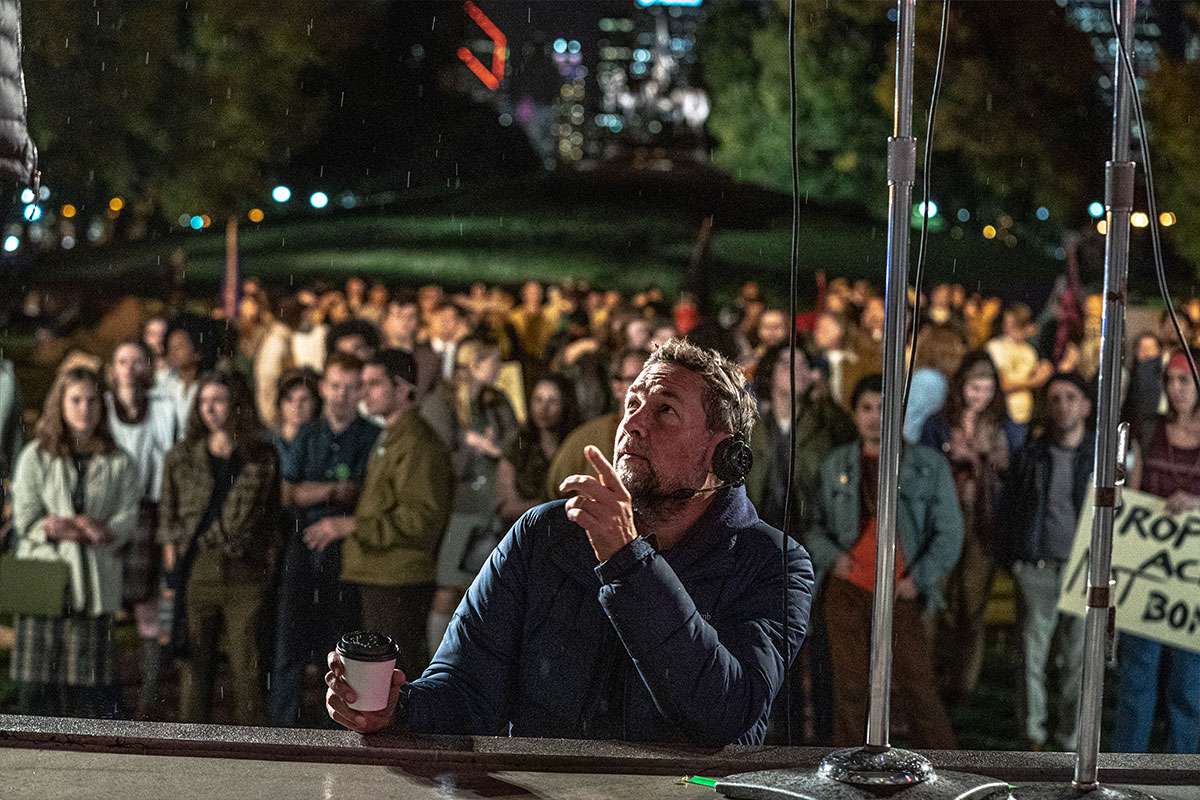 The DP says he used a lot of archival materials as a reference, and the final cut has some cleverly-inserted footage from Haskell Wexler’s Medium Cool. But the real problem was one of scale. “I knew I wasn’t doing a film about riots, but in reality there were 10,000 people in the park, and we had three hundred extras at most. We prepped different takes and I told my operators to go hand-held into the crowd.”

Papamichael immersed himself in the project, fully-aware of all its potential challenges and limitations, thus he chose the camera and lenses he felt comfortable with.

“I really liked my widescreen combo from Ford v Ferrari (2019, dir. James Mangold), which also had a lot of characters and interesting acting dynamics. I found the ARRI Alexa LF with expanded Panavision Anamorphic C-series and T-series lenses worked wonderfully well on The Trial Of The Chicago 7. It lent itself nicely for the group shots, where I could sit four or five characters in the frame. Aaron suggested we should use longer lenses, but I like wide lenses, to be physically close to the actors. And, I was able to get close-ups that feel like they were shot on longer lenses.” 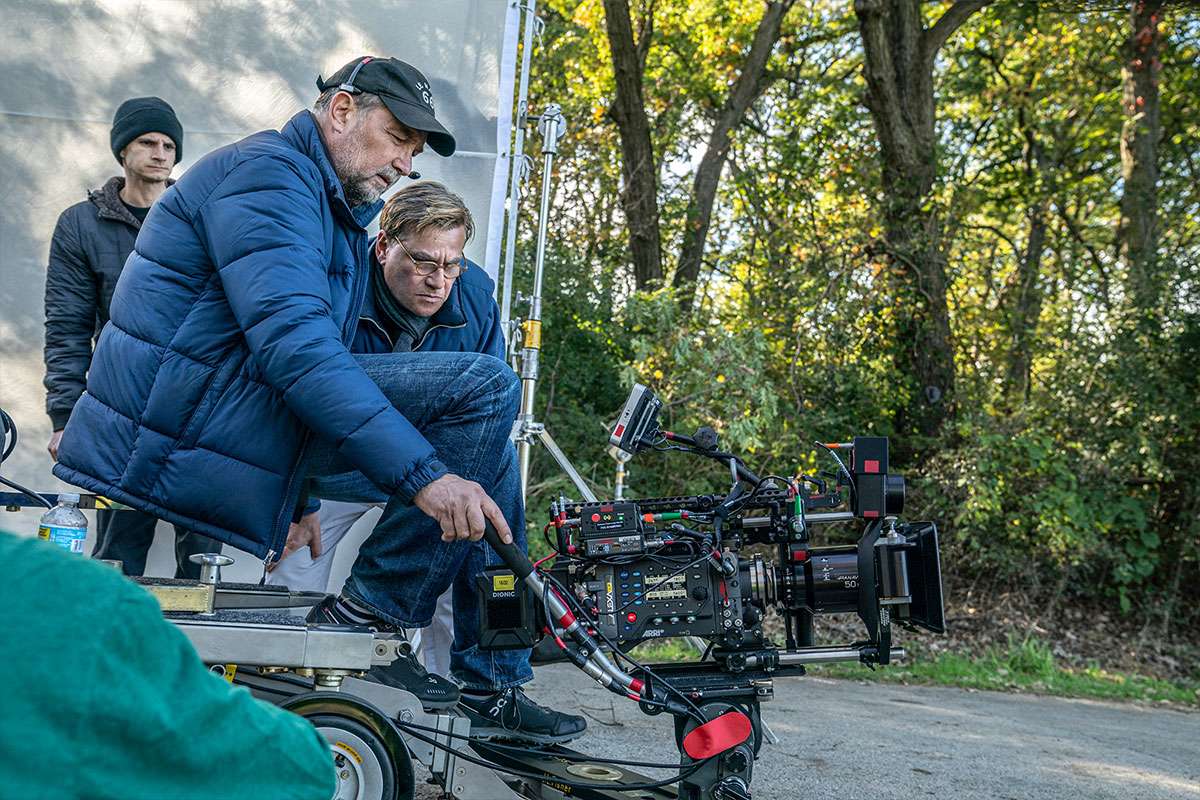 One thing Papamichael could not predict was that the pandemic would make the film end up being a Netflix movie.

“I’m happy it went that way because probably more people watched it,” he remarks, “but this movie was shot for big screen and I still think of it that way. I have to say, I’m not ready to shoot any other way.”

He concludes that the experience of shooting The Trial Of The Chicago 7 was indeed a good one. “Working with Aaron was not easy, he has a very specific style, which I had to get used to. But it was definitely interesting. I’ve done five movies with James Mangold, five movies with Alexander Payne – they’re great collaborators, who whom I’ll always like to work with. This one was different. I enjoyed that. I enjoy different. I hope to get more of such projects.”