David Oyelowo film lensed by Matt Lloyd finds its own style, ‘due to the choice of lensing and environment’

Cinematographer Matt Lloyd ASC CSC, has used Cooke Optics S4/i prime lenses extensively since they first came out – including the pilot for the limited television series “Fargo.” But in discussions with director, producer and actor David Oyelowo, they both knew that the look of “The Water Man” would need to be more majestic than a spherical lens could provide. Then, Lloyd met up with Michael Koerner of Koerner Camera of Portland, OR, who would provide the lenses and cameras for the project. 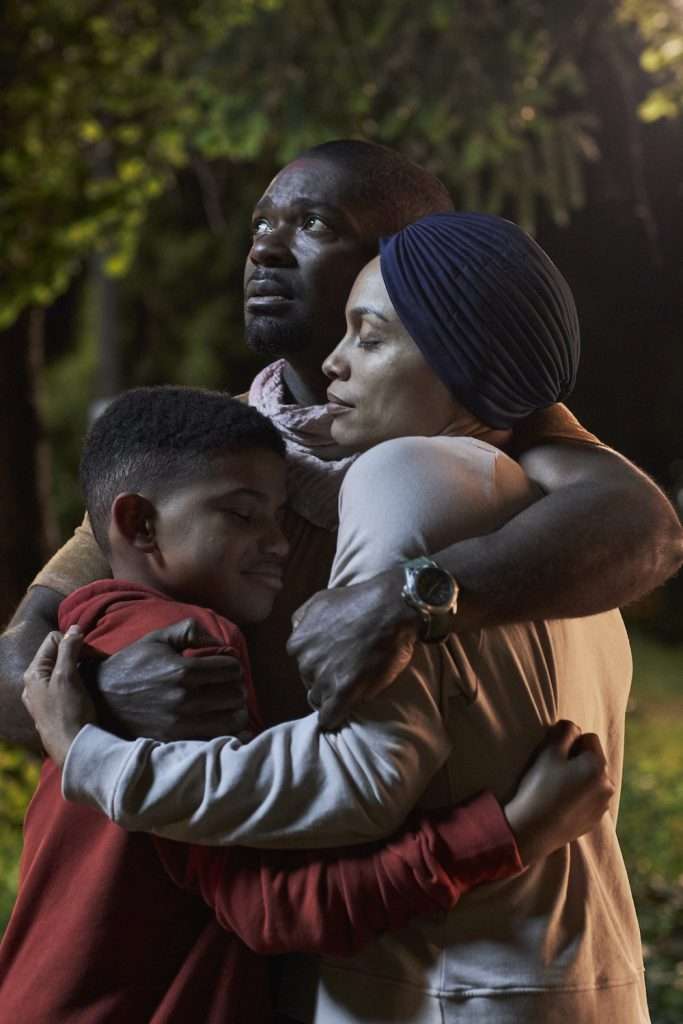 “It was Michael who suggested that I really needed to see the Cooke Anamorphic/i lenses at his Pacific Northwest Lens Summit,” said Lloyd. “Honestly, I didn’t even know Cooke made an anamorphic lens. I was leaning towards another manufacturer’s anamorphics, but I trust Michael. There was a Cooke representative at the Summit and after a few minutes, I was sold on the Cookes. The anamorphics would perfectly match the S4/i lenses that I would be using for VFX shots. By the end of production, I was amazed. You would think that Cooke had been making anamorphics forever. 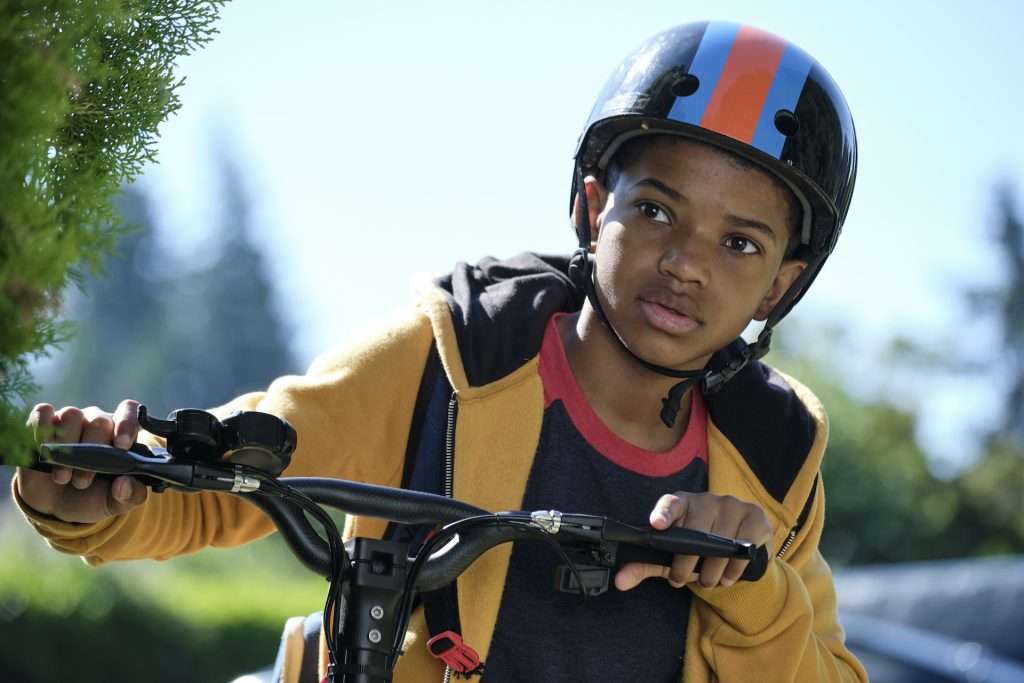 The Water Man is a current day tale of a boy who sets out on a quest to save his ill mother by searching for a mythical figure said to have magical healing powers living in the forest.

“David and I talked a lot about how the characters would exist in the majestic forest locations,” said Lloyd. “But filming in the forest is very different than reality – You often can’t see the forest for the trees, through the lens.  The anamorphic format is wide and rounder, it pushes the mid-ground and the backgrounds apart in a very distinct way. It defocuses the foliage, and gives David more of a three-dimensional feel than the flatter perspective that you get from spherical, especially when elements are so densely placed in a shot.” 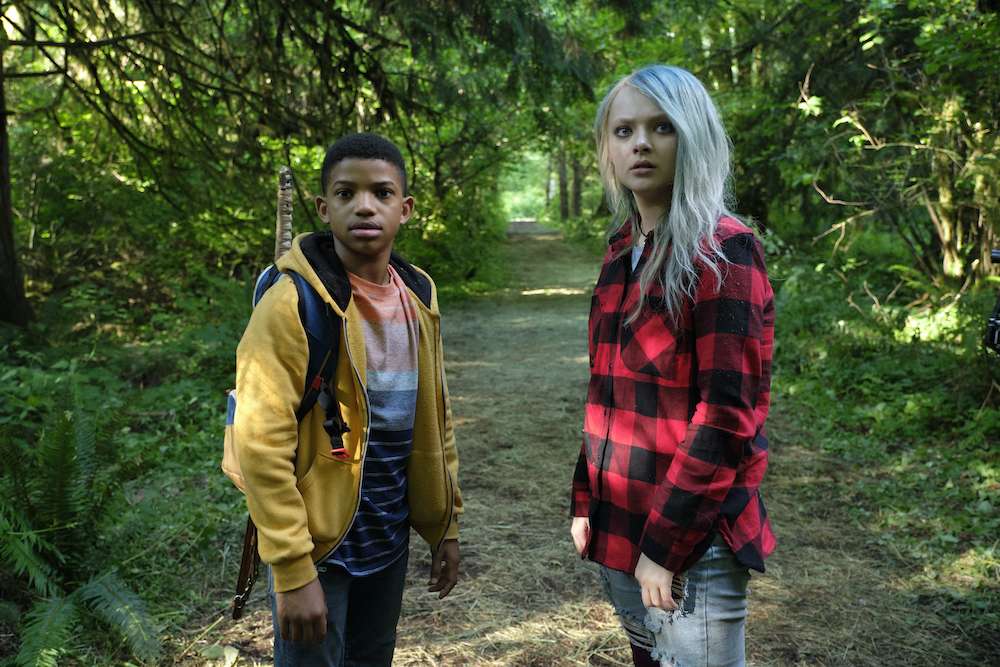 What would drive the look of The Water Man came out early in the scouting process. “David liked to do things by hand,” said Lloyd. “He’s physical with script, with pen, thumbnails, and notes. I noticed that on the front of his script, in bold letters, it said ‘This is an adventure,’ and that became the motto of the film. No matter what, we would experience the magic and adventure of a young person venturing off into the wilderness.”

Using two ARRI Alexa Mini cameras, The Water Man was shot single camera style. “We shot ProRes 4:4:4 2K for standard capture and ARRIRAW 3.4K for VFX shots – that’s what the S4s were for,” said Lloyd. “If you’re not digging into the image, then raw is sometimes overkill especially when downloading and data management is difficult on location, but perfect for VFX work. ProRes 4:4:4 has always been robust enough for what I am doing from a colour perspective.” 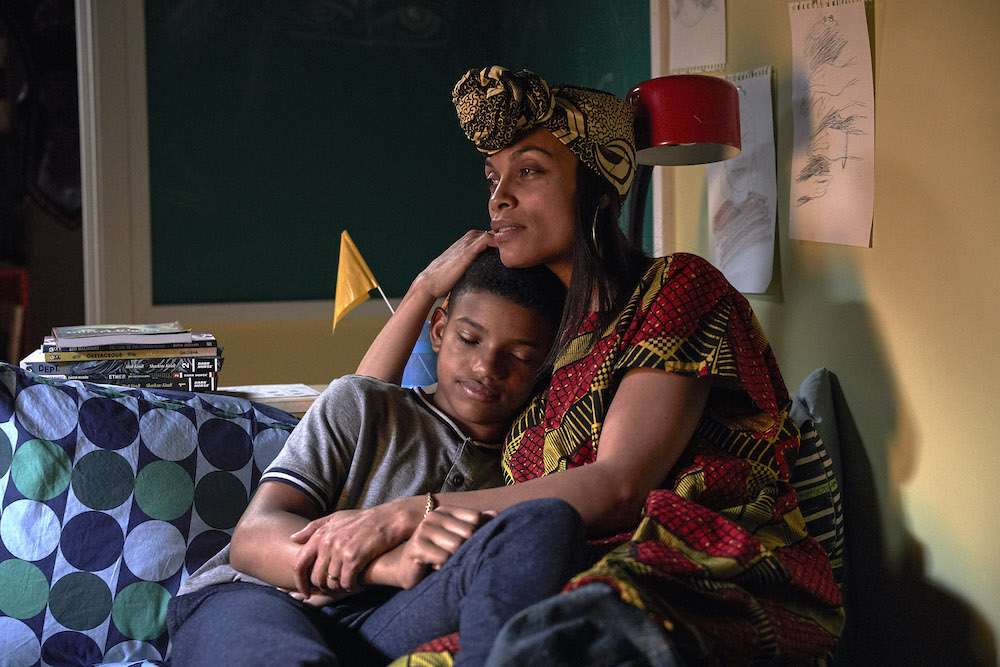 “As I said, the anamorphics and the sphericals matched nicely – all I had to do was a bit of number conversion,” said Lloyd. “But that 65mm really saved us. I would use it as a straight 65 and as a macro. It’s so much better than using diopters. It really proved its worth in close-ups capturing textures, insects and the kids reading maps.”

In one particular scene, Lloyd explains how viewers can see how the macro function of the lens really helped make certain shots possible. “There’s a scene right after the two kids are camped out for the night, where trees are falling and they’re trying to take shelter and being overcome with insects. In the following scene the next morning, the two kids are thinking about giving up in their search. They’re seated on a rock, but the look we wanted was for it to appear as if they were sitting on a cliff face. The 65mm gave me great shots of one of the kids’ hands hugging her knees and then bringing the shot up. The falloff of the trees really helped with the isolation of the shot. And the skintones are great, it’s very much like a show piece. Plus, the over-the-shoulder shots show off the geometry of the lens really well. 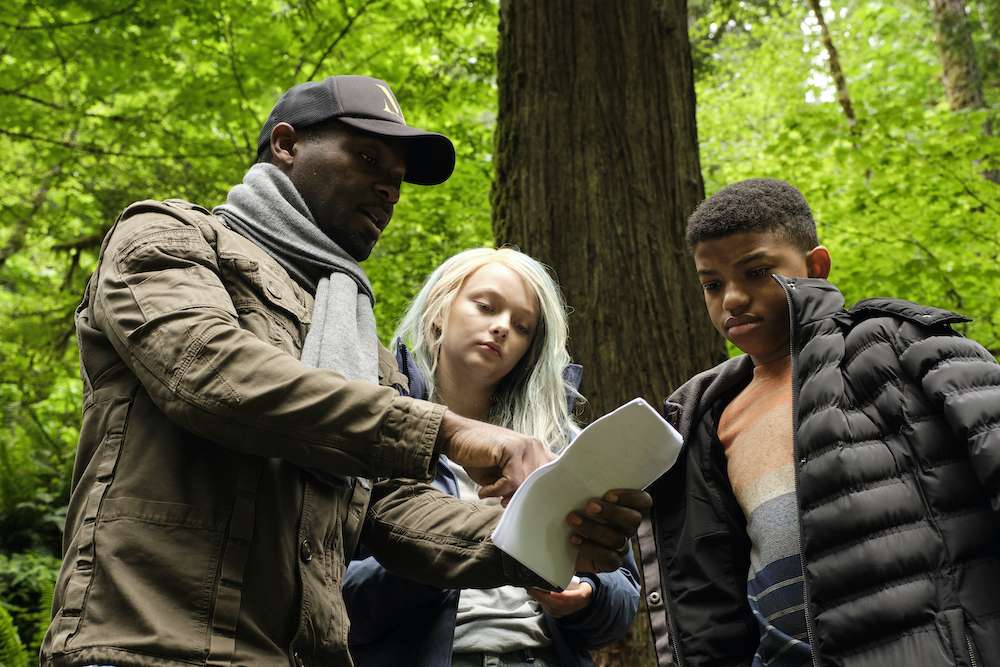 (L-R) A behind the scenes still of director David Oyelowo, Amiah Miller and Lonnie Chavis from the adventure/drama film, THE WATER MAN, an RLJE films release. Photo courtesy of Karen Ballard.

In addition to the 65mm MACRO, Lloyd also relied heavily on the 40mm and the 100mm Anamorphic/i prime lenses.

Lloyd instinctively knew that the S4/i primes would be perfect for the VFX shots. “These VFX sequences were getting really big for our vendors, so I needed to simplify the capture, which is where the /i Technology lens metadata really helps everyone. The VFX house knows exactly what we were doing – and as we’re doing it, we can see all the data we need on the monitor on set. There’s no more asking ‘what’s the…?’ it says it right there. We had very complex 2D composites to work out. The S4s are incredible lenses, even the 14mm where lines are just up and down. It was up to the VFX guys to make sure that the spherical shots also matched the natural distortions of the anamorphics.” 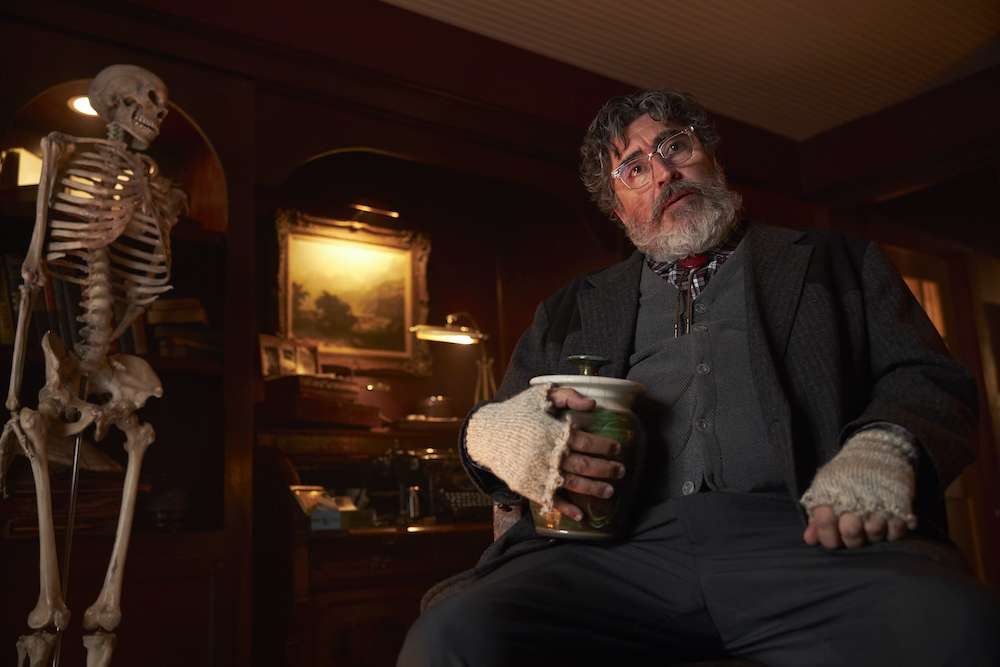 Lloyd and Oyelowo had a classical feeling about The Water Man. “It’s not inherently rough or stylized,” said Lloyd. It finds its own style, due to the choice of lensing and the majesty of the environment we’re shooting in. It’s a very youthful adventure, embracing the nature of the Pacific Northwest – it’s a softer, cleaner type of light. We didn’t go wild with colour temperature. Daylight was neutral, with our interiors mostly at night, so we added some warmth to play up the family’s bond with lots of practicals and concealed lighting pushing warmth into space. Seeing them as the loving people that they are and rendering them that way.”

Working with Oyelowo was another benefit for Lloyd. “It was one of the kindest, most honest professional collaboration with another human being I’ve had. He’s so emotionally in tune with what he’s doing and how people are working in front of and behind the camera. He’s become a dear friend over the years and really brings the best work out of you.” 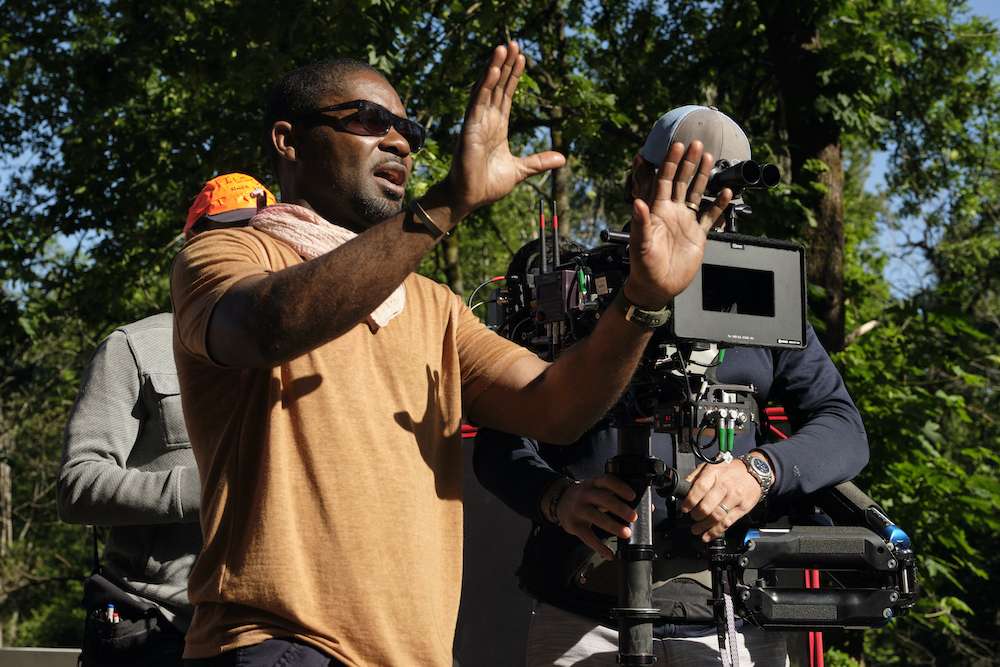 David Oyelowo in a behind the scenes still from the adventure/drama film, THE WATER MAN, an RLJE films release. Photo courtesy of Karen Ballard.

The film was shot in Portland Oregon in Spring/Summer of 2019 utilizing an amazingly talented local camera crew. Working in Portland was a great experience for Lloyd. “The Portland crew was fantastic. It’s a small and great group of committed artisans and technicians that have a lot to offer the filmmaking community.”

Production went smoothly but Covid would have an impact on post production. “I’ve worked with colourist Sean Coleman from Company 3 for a long time…we’re good friends, but this would be my first and only 100 percent remote DI,” said Lloyd. “We would do whatever was necessary, and it was a bit nerve racking with Sean and I sending stills back and forth.” But there was an upside. “We maximized the benefits of getting more time than we normally would – and people aren’t popping into the room while you’re in the middle of a scene. Once in the theatre it looked fantastic, so it all worked out.”

And Lloyd’s thoughts on his first time shooting with Cooke anamorphic lenses “Those Cookes did as good of a job as I’ve ever seen in an anamorphic lens. I would certainly add them to the rotation whenever considering anamorphic photography”