Directed by Amanda Kernell and shot by DP Sophia Olsson, Charter follows the dramatic events of a divorcee on the run after abducting her children amidst a custody battle. It recently won three Guldbagge Awards (Sweden’s national film awards), including best female lead actress, best director and best cinematography. It has also been chosen as Sweden’s official submission for this year’s Oscars. We recently caught up with Shortcut Oslo’s senior colourist, Dylan R. Hopkin, who gives some fantastic insight into his grading process on Charter. 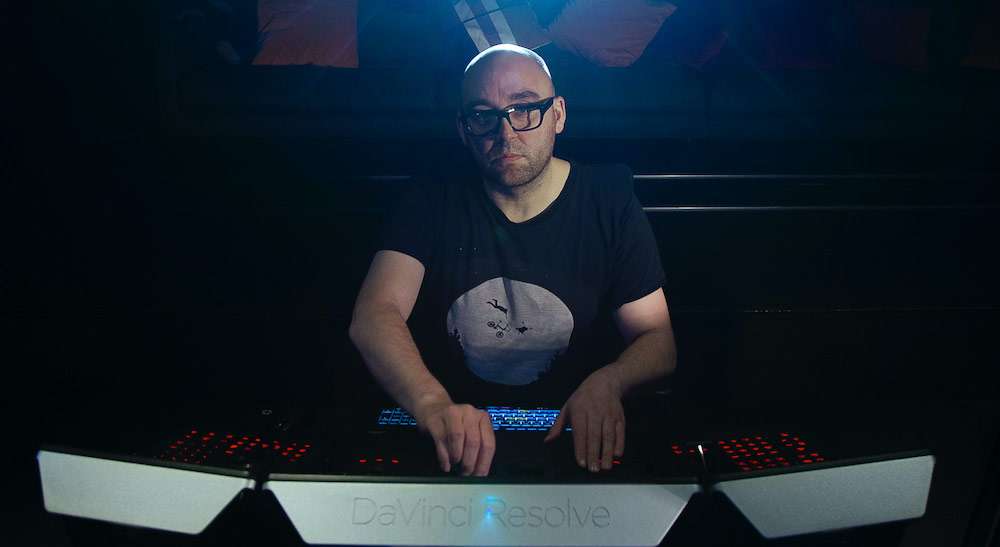 How did you first get involved with Charter?
It was back in mid-2019. At the time, I had not yet had the pleasure of working with director Amanda Kernell or the DP, Sophia Olsson. I was a big fan of their previous theatrical collaboration, Sami Blood, so I was super excited for the opportunity.   I graded several press images before the principal DI began, which was useful since I could feel out a selection of images from a cross section of the movie. I also supported the production team during the shoot itself, if any grading orientated technical questions surfaced.

What were your key aims with the grade? And how closely did you work with Sophia Olsson and Amanda Kernell in achieving them?
Before we began, I had a phone call with Sophia, to talk through the aesthetic wishes she and the director had for the movie in general. The storyline plays out in two very different environments – a frozen rural town in Norrland, northern Sweden and the tropical island of Tenerife.

After a divorce, the protagonist Alice hasn’t seen her children for two months as she awaits a custody verdict. When her son calls her in the middle of the night, Alice takes action, abducting the children on an illicit charter trip to the Canary Islands. The film follows the dramatic events of being on the run as they unfold.

From these initial conversations with Sophia, and evaluating additional reference images, we distilled our ideas for the look of the movie. In Norrland, it was to embrace the cold Nordic winter light while maintaining the suspense and urgency of Alice´s desperate situation. For certain scenes, we enhanced an underlying feeling of “uncertainty” by skewing the highlights slightly towards yellow-green tones.

For sequences in Tenerife, the aim was to subtly encourage the warmer tones, while maintaining the same underlying feeling of “uncertainty”. Happier moments can be more normal as the characters forget their situation and focus on the good times.

I also blended in colours that gave homage to two different film stocks during the grade.  Kodak 2383 print stock for the Swedish sequences and Fuji Vivid 8543 negative stock for sequences shot in Tenerife.

We spent approximately eleven days on the colour, and an additional day for stabilising, reframing, sharpening and other paint fixes. I worked four days alone, and eight days in session with the director and DP. We quickly found a common language that described what we needed to achieve. We also pinpointed the more challenging sequences which needed additional experimentation to get right. I really enjoyed how focused Amanda and Sophia were during our sessions, they are both incredible artists.

Can you describe a couple of examples of scenes or sequences where the grade really helped reflect the narrative?
There were several sequences from northern Sweden where we needed to heighten the drama. A scene where Alice illicitly picks up her son Vincent from school comes to mind. We skewed the highlights towards a more yellow-green hue, while still maintaining a cleaner colder tone to the rest of the image. We wanted to relay a subtle sense of urgency linked to the escape from Sweden that lay ahead.

We also did a similar trick to a night time scene shot outside an ice hockey arena. In her desperation, Alice seeks out the social services officer that has her custody case, begging for the case to be re-evaluated. A mix of fluorescent tubes and sodium vapour street lights were a major part of the visible light. Falling snow was picked up by the different light sources, which gave an extra layer of tension. I isolated the practical highlights and slightly skewed them towards a yellow-green hue to heighten the sense of desperation.

In Tenerife, towards the end of the film, Alice and her children stay overnight at a gritty rundown motel, as her last resort. For these interiors we had to balance keeping an overall dim, gloomy illumination, yet still being able to interact with the tension in the characters’ facial expressions. I achieved this by lowering the overall exposure with my offsets while reintroducing the brighter highlights from fluorescent tubes by layering them back in with a layer-mixer node.

This way, I managed to maintain higher contrast in the image, while keeping the dimly lit atmosphere. I also added some tracked power windows which highlighted faces and others that subtracted light where we needed negative fill. Shaping light really helps focus on the story.

What camera and lens package was Sophia working with, and how did that affect post?
Sophia shot the feature with an ARRI Alexa Mini camera with Cooke Anamorphic lenses. Her images were extremely well composed, always honouring the story both in framing and light. The movie’s chosen aspect ratio was 2.39:1, which is my favourite aspect ratio since it is so cinematic and in my humble opinion usually gives one of the most epic theatrical experiences at conventional cinemas, only beaten by proper IMAX.

The Cooke Anamorphic lenses added a rich creaminess and a pleasing soft anamorphic bokeh that says “cinema”. However, there were the occasional instances where we had to sharpen faces due to the lenses softness, just to get closer to the character’s performance. That was easily dealt with by tracking power windows on the specific areas and adding sharpening to the Y-channel only.

An important shout-out must be given to production designer Sabine Hviid who also had a huge part in the overall look. The best visuals are always those captured in-camera with as little manipulation done afterwards.

What were your biggest challenges during the grade?
The exterior light in Tenerife is unique. There is a slight haziness to the skies and how the light was scattered, even during sunny weather. This, in turn, can be challenging because it flattens the directional high-key light, especially in the actors’ faces. Another usual suspect was that the sunlight’s direction could change during a scene. This was especially problematic in scenes shot over a more extended period of time.

But we carefully worked with these challenges, not against them. It was all about rebalancing the equilibrium between the fill and high-key light, yet staying true to the cinematography.  I selectively keyed certain tonal ranges of skin and gently used curves to nudge things in place.

Can you give an overview of your process and what tools you found most helpful?
My basic approach is to get a solid first grading pass done, relying heavily on printer-lights and lift/gain for my primaries. For hue and saturation management I tend to reach for vs-curves, saturation and colour boost. I find doing my corrections prior to the LUT, in log-space, yields the cleanest results. I try to use the big brushes first, then finetune during the next phase.

When it comes to shaping light, which helps lead the viewer’s attention to the most important area of a frame, utilising DaVinci Resolve’s Power Windows and the fantastic cloud tracker is a staple of my work.

After that I do additional trim passes on a per scene basis utilising Resolve´s grouping capability, where I create look-trims at a Post-Clip Group node tree level. This saves an enormous amount of time during client sessions and keeps the creative energy flowing even in light of a looming deadline. I couldn’t work without it!

As with every software solution, experience helps, so you can choose the best parameters for any given task. However, I find that Resolve is a very artist friendly and an intuitive solution for creative colouring. The threshold of knowhow needed to understand the package is getting more accessible with every release. I think the way we grade will be in constant evolution based on how we use emerging tools and workflows that are on the horizon. I am especially excited to see what the future developments of the DaVinci Neural Engine will bring.