Inspired by real events, the Apple TV+ limited series Black Bird tells the story of Jimmy Keene (Taron Egerton), who, in exchange for early release from his 10-year prison sentence, agrees to be placed in a maximum-security prison where he’s tasked with eliciting a confession from suspected serial killer Larry Hall (Paul Walter Hauser). “The heart of this story is a character study that dives deep into a complex examination of misogyny and the spectrum of evil that lies within humanity,” says cinematographer Natalie Kingston, who photographed all six episodes. “My goal for the cinematography was to create a darkly textured and viscerally unnerving feeling to this underground prison world.”

Kingston worked with Panavision New Orleans to assemble a camera and lens package that included Panavision H Series optics and a Panavised Alexa Mini LF camera. Panavision recently caught up with Kingston to discuss her work on the show, which began streaming on July 8. 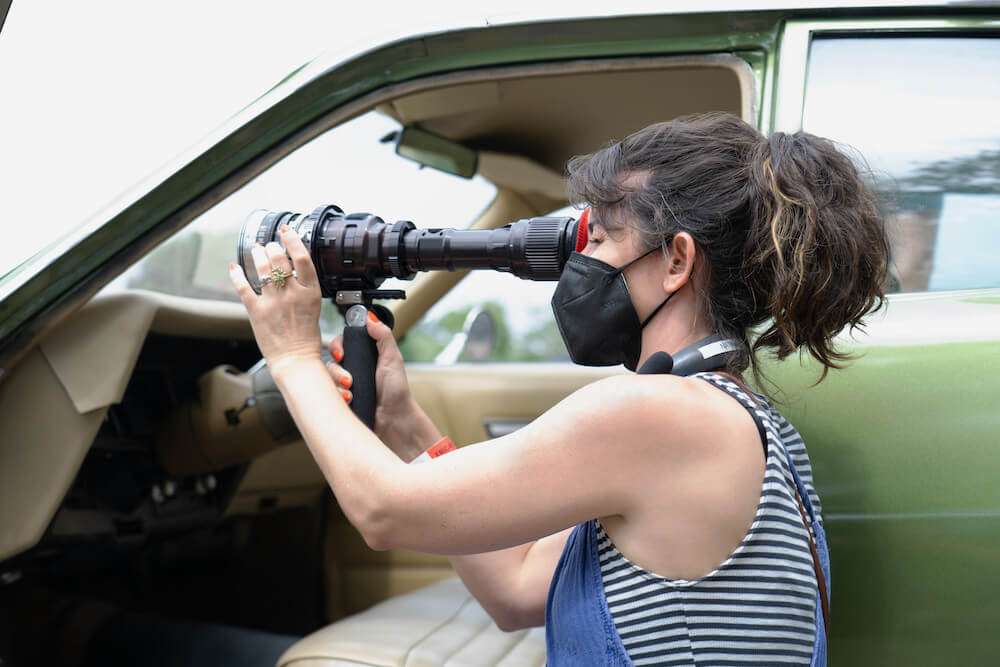 Panavision: How would you describe the look of Black Bird?

Natalie Kingston: Much of the series is centered around the disturbingly intimate relationship between the two main characters, Jimmy Keene and Larry Hall. We spend a large amount of time inside their conversations, which take place within the confines of a jail where they are physically unable to escape. I wanted the audience to feel uncomfortably immersed in that space where Jimmy grows to confront his own demons. Large format’s wide field of view was a tool that helped create that visual metaphor. That format paired with a 2:1 aspect ratio allowed me to frame the characters in a way that felt vast and expansive, where the viewer feels every subtle, nuanced expression.

The lighting was always rooted in naturalism but shaped and sculpted in a way that aimed to enhance the tension and disturbing nature of the story. The prison gets darker and more unsettling as the series progresses, as does the inmates’ relationship. I tried to maintain rich contrast with a subdued colour palette that would transport you to this gritty, haunting world.

Were there any visual references you looked at for inspiration?

Kingston: My main visual reference was Gordon Parks’ 1957 photo essay, The Atmosphere of Crime. I was extremely inspired by the rich, pastel-like palette of the photos. The vivid contrast and striking compositions Parks created really resonated with me. The way he used available light felt considered but expressive. These were all elements that I wanted to infuse into Black Bird.

What brought you to Panavision for this project?

Kingston: I’ve been working with Panavision since the beginning of my career. They have supported me and my projects, large and small, throughout the years, so there was no question that I would work with them on Black Bird.

What optical characteristics did you see in the H Series lenses that make them the right match for Black Bird?


Kingston: Before I even tested lenses, I had a strong feeling that the H Series would be the ones I’d use to shoot this project. I had used them before on a handful of commercials and fell in love with them. There’s a subdued feeling to the colour palette, like that pastel-like quality that I was after. There’s also a slightly textured feel with a soft roll-off that is very filmic and appropriate for this story set in the 1990s.

How did Black Bird differ from other projects in your career?

Kingston: This was my first television project, and I shot all six episodes. It was a new challenge for me, and I felt very fortunate to have the opportunity to create and maintain the look of an entire series. Up until that point, I had shot independent features and commercials, so it was the longest shoot I had done, with the most resources.

What inspired you to become a cinematographer — and what keeps you inspired today?

Kingston: My infatuation with the camera began when I was around 10 years old. I would check out stage-play books from the library and turn them into little movies that I’d shoot with my parents’ VHS home video camera. The idea of telling stories with a camera stuck with me. Even though at the time I didn’t know what a cinematographer was, I think that was the first seed planted that ultimately led me down this path.

I’m always so energised with every new project as it’s a new opportunity to create a visual language for a world that’s never existed before. The possibilities are endless. Looking at still photography is a big source of inspiration for me. I also draw a lot from the mundaneness of everyday life. There’s so much visual magic in it if you just sit with it and observe.