Pair a British-born songwriter-director who’s collaborated with musicians like Jay-Z with a Romanian cinematographer known for shooting intense dramas, and what kind of movie might you get? An American western, of course. But not just any American western. The Netflix feature The Harder They Fall, directed by Jeymes Samuel and photographed by Mihai Mălaimare Jr., is a table-turning, race-bending, music-rich western where Black actors play the cowboys (and villains) while the white actors populate the background. This depiction of the American West is one seldom seen on the silver screen, but one that nevertheless existed, as the film notes on its title card.

The Harder They Fall may be the first western Mălaimare has shot, but the cinematographer is no stranger to the genre, having grown up watching them on Romanian TV. “I love westerns and feel that all filmmakers deep inside want to do a western at one point,” he says. “When I read the script, I got hooked to it right away. Music is such a big part of the process for Jeymes, and the script had so many music notes in it that it showed it would be a different type of western while still paying tribute to the genre itself. It had all the right ingredients to be special.” 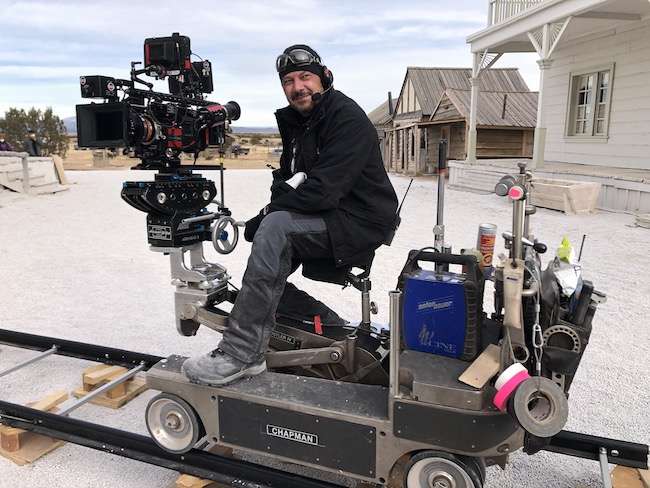 Samuel had a specific aesthetic in mind for the film and brought paintings by the African-American artist Kadir Nelson to his first meeting with Mălaimare. Nelson’s work is vibrant, illustrative, and full of colour, and Samuel desired to capture a similar style for the film’s visuals. “He wanted the look of the film to be a photograph printed on high-gloss paper,” Mălaimare says. “He wanted that saturation and high contrast and glossiness.”

Mălaimare, in turn, found inspiration in Dutch photographer Pieter Henket’s 2018 book Congo Tales, which featured large-format stills of the Congolese re-enacting popular folktales. Henket employed coloured lights to achieve a similar kind of saturation and contrast found in Nelson’s paintings. During the shoot, digital-imaging technician Eli Berg loaded images of both artists’ work into his system as reference points. “That’s how we got a lot of ideas like going deep blue in the shadows,” Mălaimare says. “Sometimes the inspiration might just be framing, but the whole idea of tweaking colouring in that way was pretty great.”

After Mălaimare came aboard the project, plans were made in earnest to commence production, but then the coronavirus pandemic put the world on hold prior to the start of principal photography. “We all thought it would be a few weeks only, but it turned out to be much longer,” the cinematographer recalls. “But then, three or four months after, I got a call from Jeymes. He was like, ‘Okay, we’re going, are you ready?’ I couldn’t believe it. In a week I had to drive to Santa Fe!”

Covid precautions forced the filmmakers to rethink all their traditional shooting methods. “We all tried to figure out how to make a movie in the middle of a pandemic while being safe and dealing with all the extra gear,” Mălaimare says. “But it went incredibly fast. With all the restrictions, we had to learn to do things in a different way. We did only 10-hour days. It was hard to find time to have lunch, but on the other hand, you could feel that the crew was well rested. We never did crazy ‘Fraturdays’ or anything like that. When you have a rested crew, everything goes much smoother.” 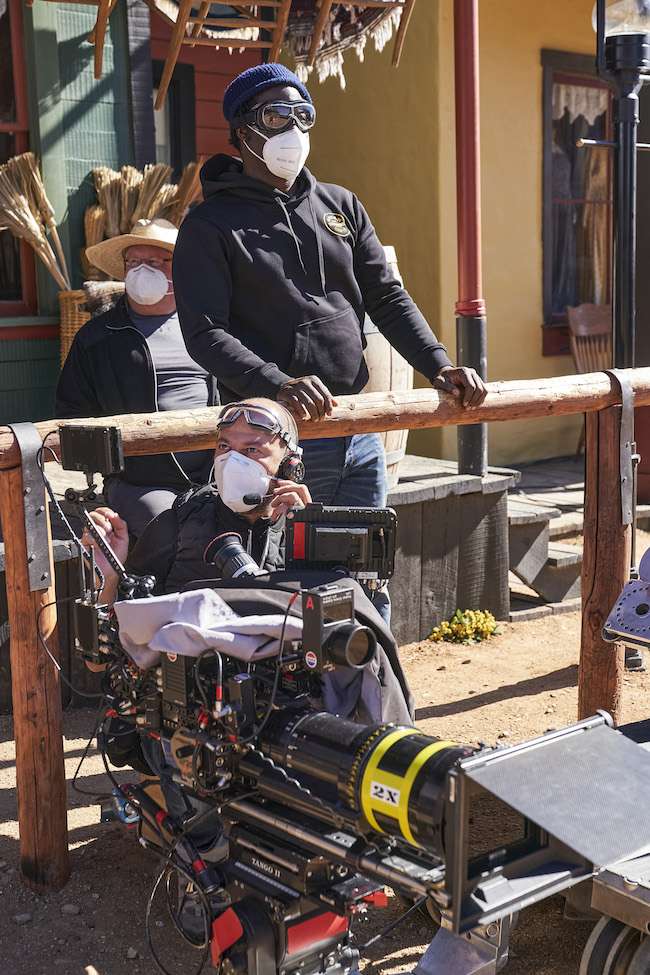 THE HARDER THEY FALL (L-R): BEHIND THE SCENES with MIHAI MALAIMARE (DIRECTOR OF PHOTOGRAPHY), JEYMES SAMUEL (DIRECTOR-PRODUCER-WRITER). Cr: DAVID LEE/NETFLIX

Samuel and Mălaimare decided that since they were making a western, it was a no-brainer to go widescreen and anamorphic. Mălaimare immediately approached Panavision, with whom he’s had a long-standing relationship. The cinematographer is also a self-confessed fan of Panavision’s Millennium DXL2 camera system. “I remember trying it the first time when it came out, and one thing that blew me away was the [Primo electronic] viewfinder,” he shares. “I think it’s by far the best viewfinder on the market. I started on film, where you have your eye in the viewfinder the whole time. I cannot function otherwise. I operate and have a hard time looking at a monitor. I really need a good viewfinder, and the whole combination with the color science made it an absolutely perfect tool.” 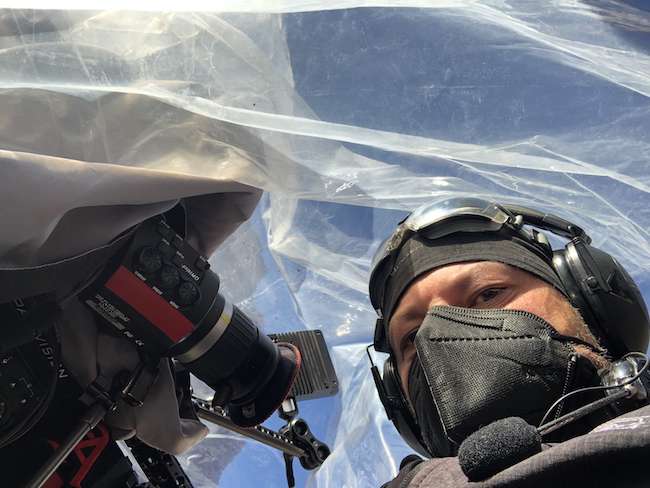 He also appreciates how DXL2 holds highlights. “You know that you have at least three stops where you have recoverable image in the highlights,” he says. “It paid off well for us because the ground in New Mexico is so reflective. The fact that everybody was wearing cowboy hats made the perfect combination. We didn’t need to fly silks, and we could shoot in the middle of the day in the harshest sun, and everybody would look great.”

For 2018’s The Hate U Give, Mălaimare had shot on DXL2 with a set of Auto Panatar anamorphic primes, which have a 1.3x squeeze ratio. For The Harder They Fall, the cinematographer says, “I really wanted to find something similar to the Auto Panatars. My main concern was the loss of resolution when going to 2x anamorphic.”

THE HARDER THEY FALL. L-R DELROY LINDO as BASS REEVES and JONATHAN MAJORS as NAT LOVE. CR: COURTESY OF NETFLIX.

After an initial conversation with Dan Sasaki, Panavision’s senior vice president of optical engineering, “Dan asked me to come over, and he showed me a set of T Series modified to a 1.85 squeeze factor,” Mălaimare continues. The 1.85x squeeze allowed the cinematographer to capture 5604×4320 images with DXL2, as compared to 5184×4320 when 2x anamorphic is paired with the camera. “That extra resolution put my mind at ease. They were also a little softer and ended up having these amazing swirly bokeh — there are so many interesting things about them. Dan showed me only two lenses, and I was sold on them right away.

“We started shooting in the forest with the Nat Love Gang, and the way that swirly bokeh looked was quite amazing,” he adds. “A 12mm H Series spherical [lens] would have given a wider field of view, but looking at the widest T Series and what it was doing to those trees and the falloff and the swirly bokeh got me hooked. In the first three days, I knew the T Series would be our workhorse and that we’d made the right decision by choosing that set.”

For night scenes, Mălaimare chose spherical Panaspeed large-format primes because of their solid performance wide open at T1.4. In fact, Mălaimare says, the wide-open Panaspeeds produced an image “very close to the images that came from the T Series during the day.”

The filmmakers also carried some 1.3x-squeeze Auto Panatars, which allowed the cinematographer to use even more of the DXL2’s large-format sensor and capture at nearly 8K resolution — 7976×4320, to be precise. Mălaimare chose to reserve these variable-prism lenses — which had been used for productions going back as far as Ben-Hur (1959) and were then refurbished for more recent films like The Hateful Eight (2015) — for portrait shots. “The old glass and the extra resolution worked really well,” he says.

Mălaimare embraced the opportunity to utilize so many different lenses and formats with DXL2 for The Harder They Fall. “The fact that you can mix formats and resolutions seamlessly is pretty amazing,” he says. The fruit of his efforts is a western with a distinct visual flair that pushes the boundaries of the genre while staying true to its original spirit. 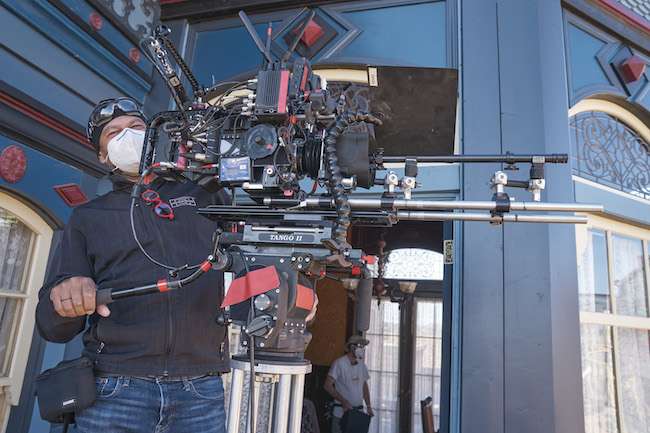 THE HARDER THEY FALL: BEHIND THE SCENES with MIHAI MALAIMARE (DIRECTOR OF PHOTOGRAPHY). Cr: DAVID LEE/NETFLIX

Unit photography by David Lee. All images courtesy of Netflix.