To a degree, late September 2021 might end up being remembered as the time period in which live, in-person film industry events started creeping back into relevance after the lengthy – and still ongoing – Covid-19 shutdown of such events. In no small measure, that’s because the Cine Gear Expo LA successfully went forward as an in-person event at the Los Angeles Convention Center in late September. 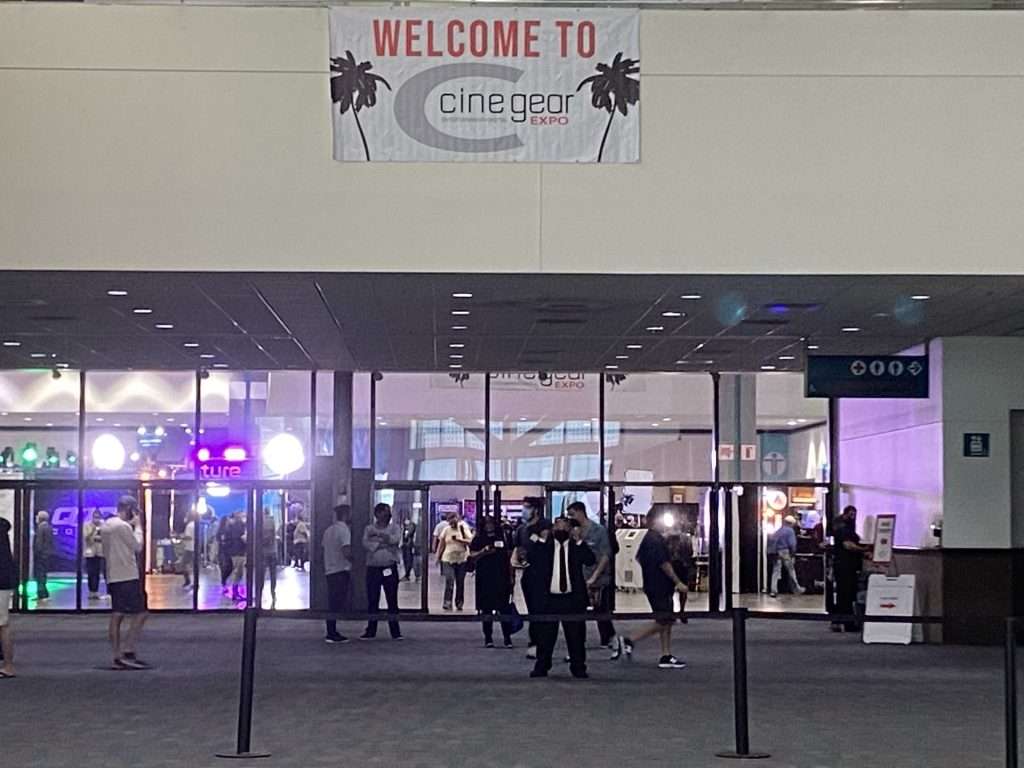 Taking place in an expansive indoor venue (with certain outdoor booths and exhibits, as well), one of the world’s leading cinema technology exhibitions was clearly back, though a smaller event than in past years primarily for two reasons. First, very little of the usual international traffic was present, largely due to global travel restrictions as the world does battle with the Covid Delta variant; and second, a number of major companies, particularly major camera players like Panavision, ARRI, RED, and others, declined to participate, or postponed until next year, or pulled out of the show as it became clear that the Delta threat was continuing.

Still, with an airy, wide-open booth layout and strict protocols requiring all attendees to prove vaccination status and wear masks, Cine Gear went forward largely as a grip, light, filter and lens exhibition in which numerous innovations, new tools, familiar faces, panel discussions and in-person business happily went forward for some 80 exhibitors, who felt their presence would be worthwhile. Indeed, several exhibitors who spoke with Cinematography World on the first day of the show indicated the nature and quality of the traffic and business they were able to conduct was better than they were expecting, and productive for their companies and the industry. 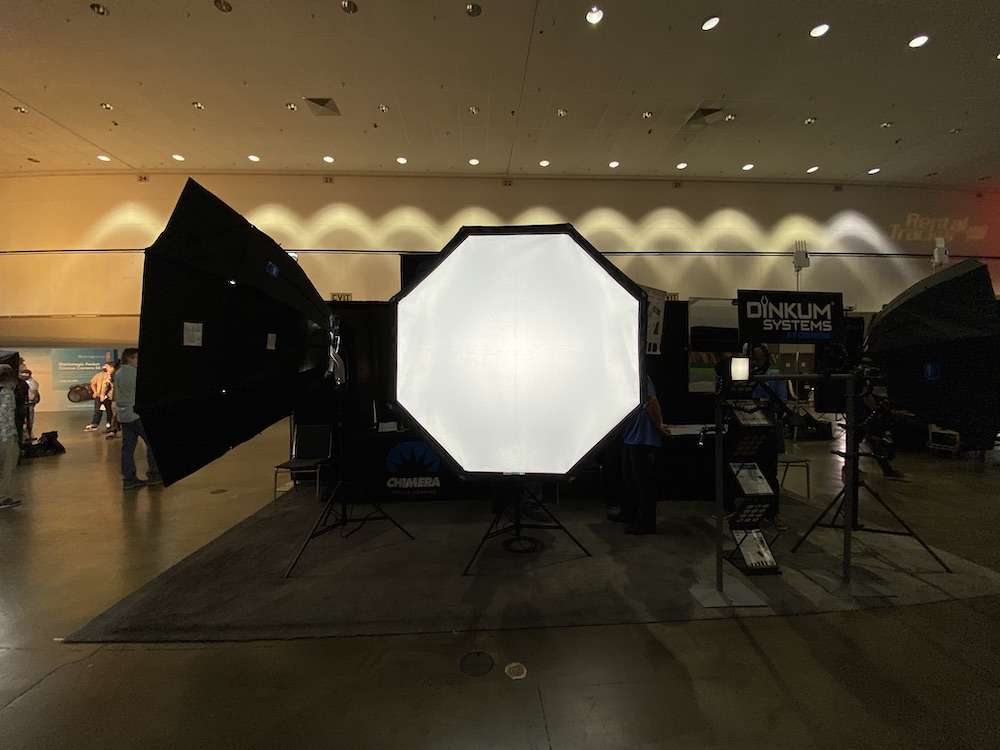 “I think people are slowly coming back, excited to be out and about and talking about cinema again,” suggested Tony Wisniewski, senior marketing manager, photo and cinema, for the Carl Zeiss company, which had a range of new lensing options on display at its booth.

“One nice thing about our industry is we have kind of figured out safety protocols, making sure people are vaccinated and wearing masks, so I am feeling no discomfort at all being on the showfloor, talking to customers again. Cine Gear has always been a great partner for us, so we are happy to be out here, helping to support them,” Wisniewski noted.

John Fuller, director of sales for Chimera Lighting, largely agreed, saying he was “pleasantly surprised and optimistic” by the traffic he was seeing and the visitors he was meeting with at the Chimera booth. And Martin Tormer, director of content for Matthews Studio Equipment, added that it appeared to him that although overall attendance was down compared to the pre-pandemic era, the people who were showing up to Cine Gear were doing so “not to kick tyres – they are here to have serious conversations, looking to build packages, and learn more about technology they may have heard about on the Internet, but have not yet been able to see, touch or use in-person. So, in that sense, I think what we are seeing at this show is the real deal.”

Jakob Ballinger, founder of the lighting equipment company The Light Bridge, emphasised that point. He suggested that his company’s goal for attending Cine Gear – after a year-plus of relying on social media, online videos, podcasts and interviews to promote and explain their products – was “to let people get our equipment into their hands. They may have heard about some of our products, but to hold them in your hands and understand what they can do really makes all the difference. 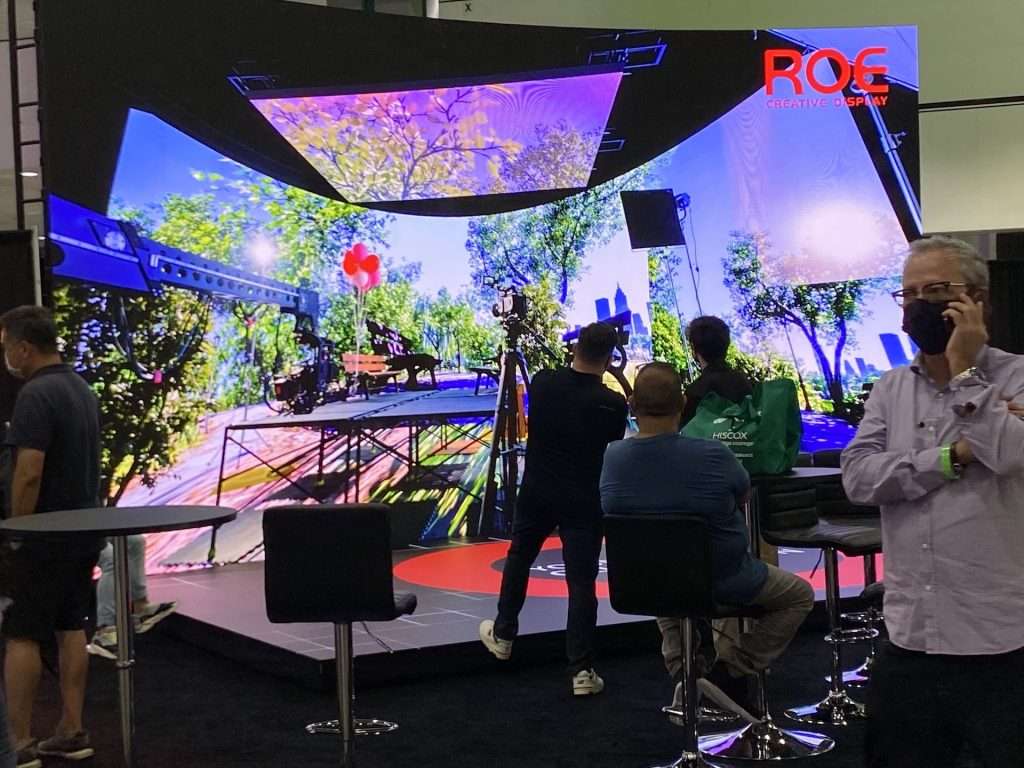 “Under these conditions, it’s not about trying to service hundreds of people who might visit your booth. It’s more about getting the equipment into the hands of people who are seriously interested, to have a personal relationship with those people, and I think this show is giving us an opportunity to do that. It also represents the first opportunity that Light Bridge has had to officially present our partnership with Matthews, how we are working together – an initiative that came together during the pandemic, but which we couldn’t really demonstrate in-person until now.”

Indeed, at the outside pavilion where the Matthews and Light Gear booths were located side-by-side, the two companies demonstrated a combination of Light Gear’s newest CRLS light reflectors configured atop a Matthews Air Climber light stand, which Tormer said “is the world’s biggest light stand – up to 25ft high.”

Ballinger emphasises that the idea behind what he calls “these really high-end super reflectors” is to help cinematographers create “really natural looking light with less of a footprint. We realise this is a new approach to lighting in the sense of using reflectors as key light. It’s about quality, not just brightness. We hope these reflectors will help optimise the process in an era where we are going with digital cinematography, fast shooting, and lower budgets.”

Matthews, meanwhile, presented a couple of entirely new products at the event. One of them was the Matthews Claw, a new rigging tool designed to make the current industry rage for LED lighting tubes easier to implement. The Claw is designed to enhance ease-of-use mounting of Astera Hyperion, Titan, Helios and T12 tube lights, and it was certainly enough to excite Tormer, who has worked as a grip for decades, as he demonstrated how the technology works.

“The Claw is a tube holder for thousand-dollar-plus tubes,” he explains. “You certainly want to treat them right. We wanted to design something specifically for the dimensions of these various tubes that are now so popular. It has a baby pin off the back of it, a simple collar, and a handle that gives you proper leverage so you won’t damage the tube. It has padding in the fingers so that it can’t scratch the lens, and then, when you open it up, it stays in place even when guys move it around, because it flops over and there is a magnet inside to keep it where it needs to be, ready to mount. It can go anywhere along the tube you want, and you can offset it completely all the way to the end, plus it holds perfectly with standard grip gear.”

Matthews also introduced at Cine Gear its new VeeBoxx portable soft box enclosure that can be utilised with The Claw to easily transform light tubes into diffused lighting sources. The lightweight VeeBoxx includes removable front panels with three different densities of fabric to enhance diffusion options – Voodoo Cloth, Lite Grid and a Quarter Grid. It has a reflective interior, a rear zipper for easy access to the back of the fixture, and the ability to fit The Claw through the back zipper.

“Once you put the tube in it, it becomes the spine of the soft box, so you can essentially build up a soft box around your tube,” Tormer emphasised.

Meanwhile, Zeiss was highlighting its new Radiance Lenses – the newest version of the company’s line of Supreme Prime lenses.

“We launched the Radiance right before the pandemic, but since then, we have created 11 focal lengths,” Wisniewski says. “It gives you a controlled flare over all focal lengths by introducing flare into the cinematic characteristics of the Supreme Prime Lens. And, of course, these lenses offer high speed and large-format coverage up to and including all the large-format cameras – VistaVision, the Red Monstro, ARRI Alexa LF, even in open-gate, as well as the Sony Venice.”

Chimera was busy demonstrating new products for its Octa Bank line that the company has developed for the Aperture RP 600C lighting system. These include a new 5ft Octa, the biggest product developed to date for that lighting instrument, a standard Chimera medium bank with poles and frames for the fixture, and a smaller version, as well. 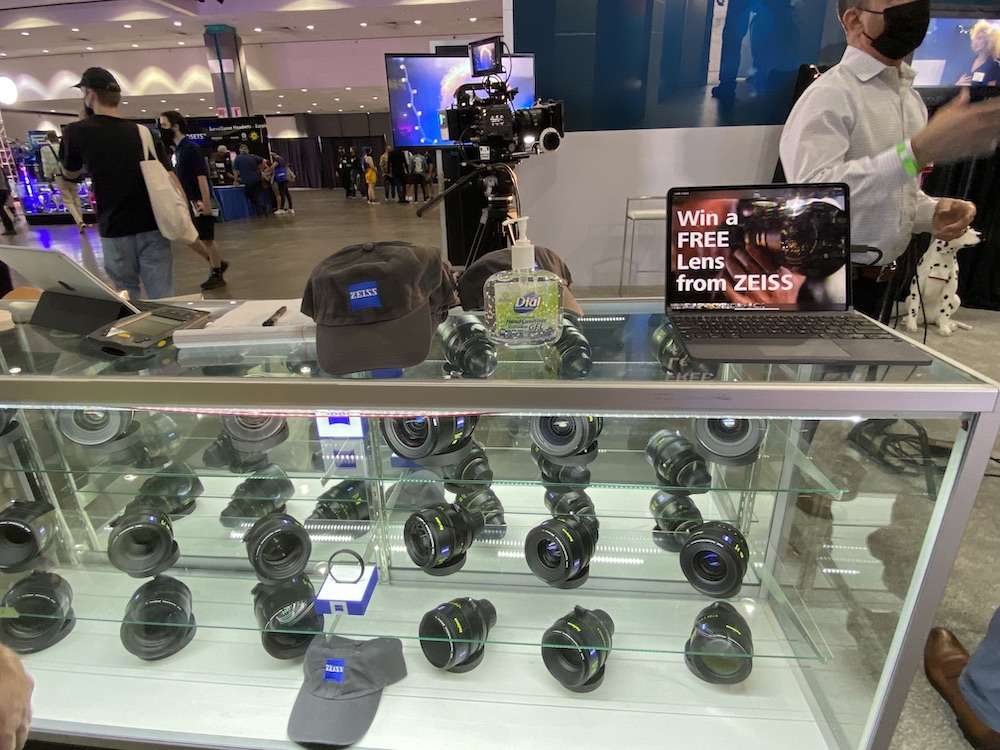 “We are also showing a product that did not get enough exposure during the pandemic – a 5ft Octa that works with the Creamsource SpaceX light, greatly increasing that fixture’s versatility,” Fuller explains. “With all of these, the idea is to really customise light-modifying products for these fixtures. We are really a designer and developer of textile products to provide specialised lighting products. We look at the actual fixture and try to figure out the right size and properties we need to get it into our ecosystem of small, medium, and large products, and that is what we are showing here.”

Several other exhibitors had a strong presence at the show. Among them was ROE Visual, which was exhibiting at a live event for the first time in almost two years. ROE had a bright booth in the middle of the show floor where it showed off its LED panels and floor systems for extended reality (XR) film and broadcast applications.

ROE showed off new innovations with its Black Pearl BP2V2 and Black Marble BM4 LED panels designed for film-centric applications, faster speeds, and easier set-ups—technology already in use in many of the world’s more prominent LED volumes at various studios.

Meanwhile, on the eve of CineGear, equipment rental provider Dynamic Rentals offered a different approach toward the goal of returning to the in-person environment in order to meet and interact with customers and other industry players. Instead of attending Cine Gear this year, Dynamic Rentals opted to throw its own event at its Burbank facility. That event, called Mini Gear 2021, included a buffet dinner, day-long bar, educational events, sponsor acknowledgments, equipment giveaways, demos and more. 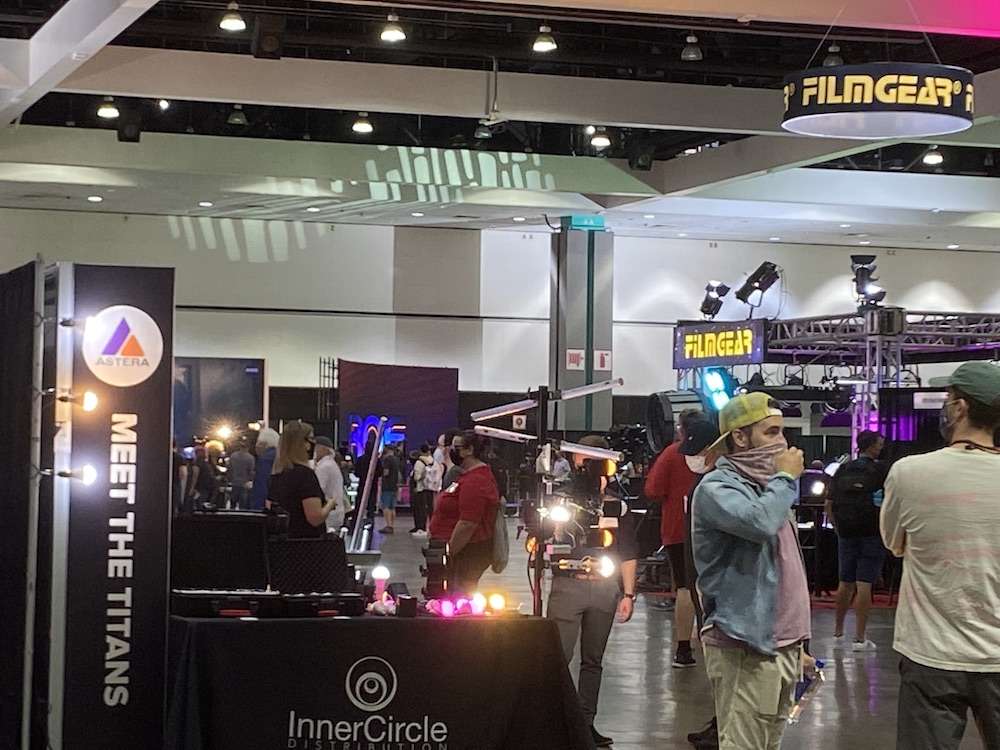 Dynamic Rentals officials say attendance was higher than expected at their facility, which had its loading doors open throughout the event, with catered dining in its parking lot and mask-wearing required. Company officials called it “a reunion of the high-end film community in Los Angeles,” and say they are planning to hold future versions of the event in other cities going forward.