Christopher Bauder, founder and creative director of Whitevoid GmbH, Berlin collaborated with musician and composer, Strahil Velchev, of Kink to produce a spectacular and truly original art installation of light and sound at the NOOR Riyadh Festival 2022 in November. Named Axion, the temporary large-scale light art piece is inspired by a hypothetical elementary particle which, if it exists, might be a component of dark matter which cosmologists believe makes up 95% of the universe. The dark matter theory describes how the universe went from a smooth initial state to the uneven distribution of galaxies and their clusters we see today.

Such an ambitious work called for a light with a big personality to achieve the necessary impact the design required, and Bauder chose 80 Ayrton Cobra fixtures, supplied by Kaiser Showtechnik of Augsberg, Germany, to define the parameters of his visuals and project its presence far into the air, making it visible for miles around. We asked Bauder how he achieved this stunning piece of art. 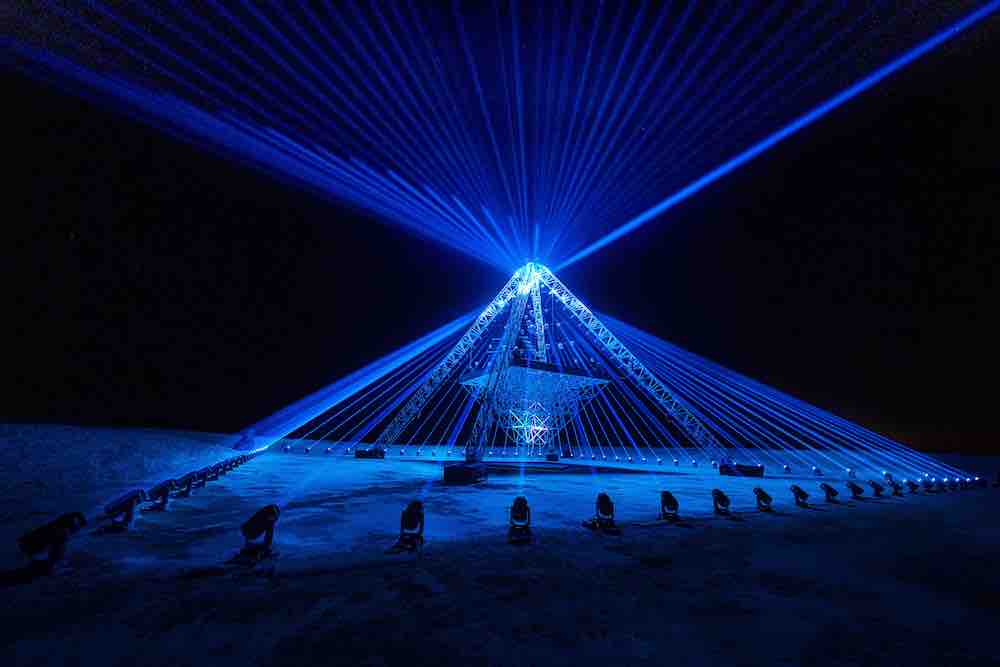 Ayrton: What was the idea behind your concept with regards to the lighting?

Bauder: “With Axion we explore the ultimate horizon: Outer Space. With its grid like array of light tubes and mile-long sky-lights the installation resembles a giant scientific device for space exploration, particle detection or interstellar communication. But once you step inside it is a reflection on the potential of axions, dark matter and the idea of the unknown.

“Within the installation we have 3 layers of lights that allow a totally different experience of the piece depending on the visitors’ proximity. The core of the installation is made up of 360 LED tubes arranged in the shape of an inverted pyramid which the visitors can lay underneath and experience up close. The next layer of lights is rigged on an 18m high pyramidal truss that carries the LED pyramid and which illuminate the space beneath the truss and 32 mirror balls above the roof of the pyramid. This layer can be explored and experienced by walking inside and outside the truss pyramid.

“The last and final layer is a 40m square arrangement of 76 Cobra fixtures on the ground, plus an additional 4 Cobra lights positioned on the top of the pyramid. This makes the whole installation visible from miles away and extends the light art installation to superhuman scale when seen from the outside. When stepping inside the array of Cobras it feels like stepping into a cathedral constructed of lights!”

Ayrton: How did you come to choose Cobra to realise it?

Bauder: “It was not an option to use indoor lights with protective domes for optical reasons, and also because it was too problematic to keep them clean and transparent in the extremely dusty environment of the desert location. So only completely encapsulated IP65-rated moving lights were an option for this extremely harsh environment. 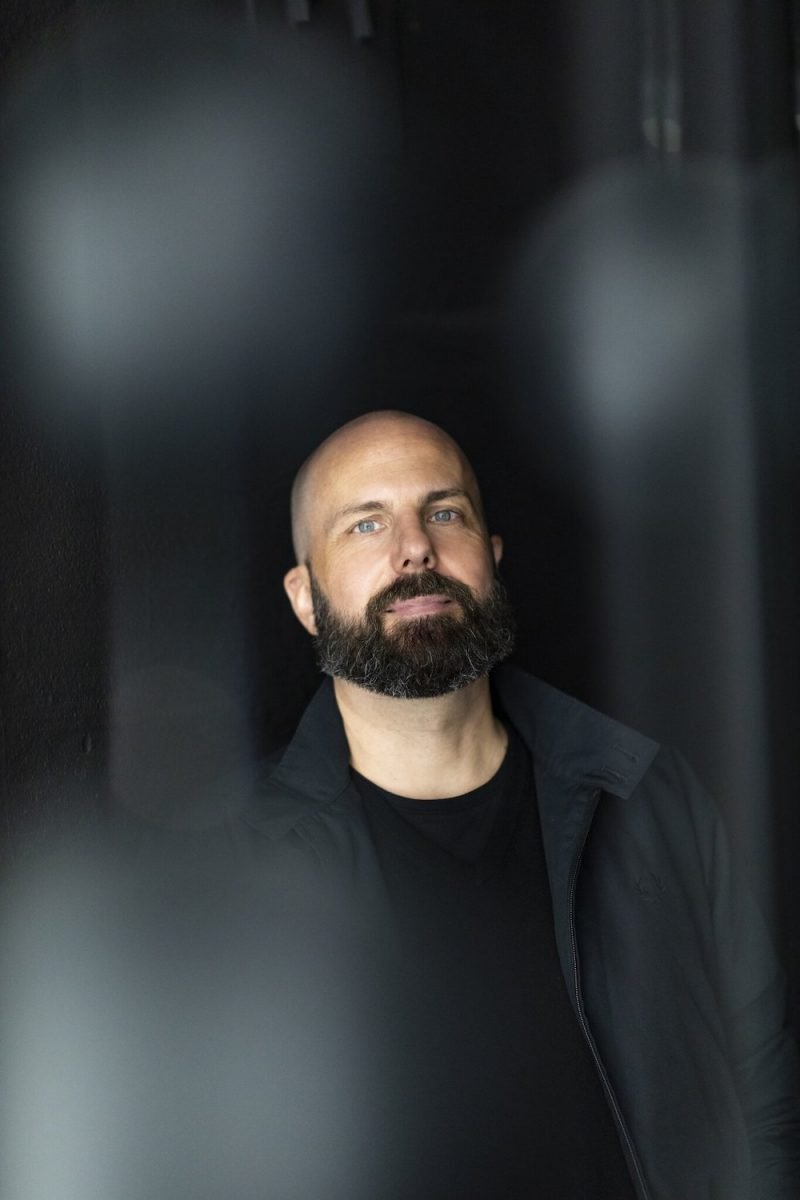 “We tested different outdoor IP65 moving lights for beam strength, beam uniformity and sharpness, consistency and colour rendering. We were also looking for lights that had a straight, virtually endless beam without a visible convergence point, and with a laser-like appearance from afar. At the same time, we wanted the light to provide the usual beam reducers, gobos and a nice smooth colour mixing. This was especially important, since we wanted to use very subtle pastel colour schemes with soft, almost invisible, transitions inside large arrays of parallel beams. In the end the Cobra was, by far, the most convincing light for the job, and we were excited to see how well it performed over the 4-week course of installation and exhibition. It needed an absolute minimum of maintenance and was extremely precise in its positioning and colour rendering.”

Ayrton: What features did you find most useful?

Bauder: “To be honest, we almost exclusively used the solid, sharp, thick and yet super parallel beam to realise the extremely geometric architectural sky constructions of the light show. Otherwise we just used a rotating hole gobo for the disco balls, which produced a fantastic reflection effect in the desert sand over many hundreds of meters, and a small slit gobo with variable focus and a clever roll animation for pixel-mapping effects on the ground.”

Ayrton: Did Cobra fulfil all your expectations?

Bauder: “Cobra far surpassed our initial expectations! We were not sure about beam visibility especially when standing close to the source or parallel to the beam, and because the strong, continuous desert winds made it impossible to produce artificial haze. Instead we were solely reliant on the sheer light output, beam volume and edge sharpness of the Cobra for visibility in the dusty environment.

“This worked out great and people could see the beams from miles away when approaching the installation. Also, an unforeseen bonus was that the beams ended abruptly above the lower layers of the dusty desert air. This created the interesting effect of beams that end with a sharp cut – something not possible in our hemisphere or even inside a city or inside a location. All this combined contributed to the unique arrangement and light experience of Axion.” 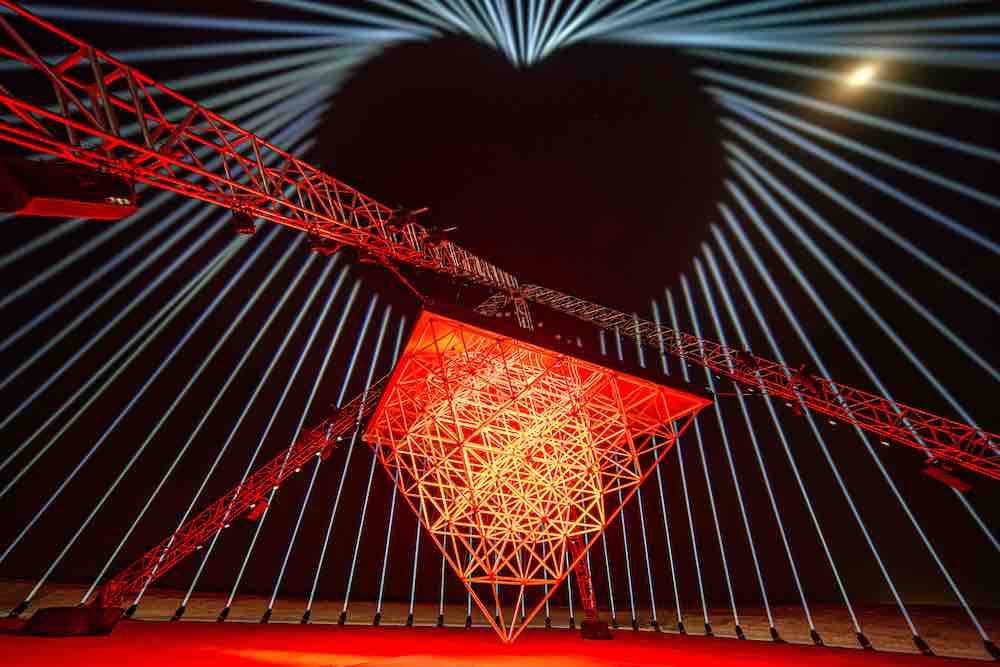 Christopher Bauder is an artist working in the fields of light- and installation art, media art and live AV performance. He focuses on the translation of bits and bytes into objects and environments, and vice versa. Space, object, sound, light and interaction are the key elements of his work.

More information on Ayrton Cobra and its full range of laser-sourced and LED lighting fixtures can be found at www.ayrton.eu