The film, narrated by two-time Academy Award nominee Catherine Keener, is a stunning view of the struggle for survival captured on Red predominantly at 8K and presented in 2.4:1, a widescreen ratio usually reserved for the cinema. Ten years of planning went into the three-year shoot. Footage was gathered from teams on water, air, land and ice using long lens, gyro-stabilised Cineflex, drones and timelapse photography. In summer the teams trekked on foot and in winter, shoots traversed the tundra using snow scooters. 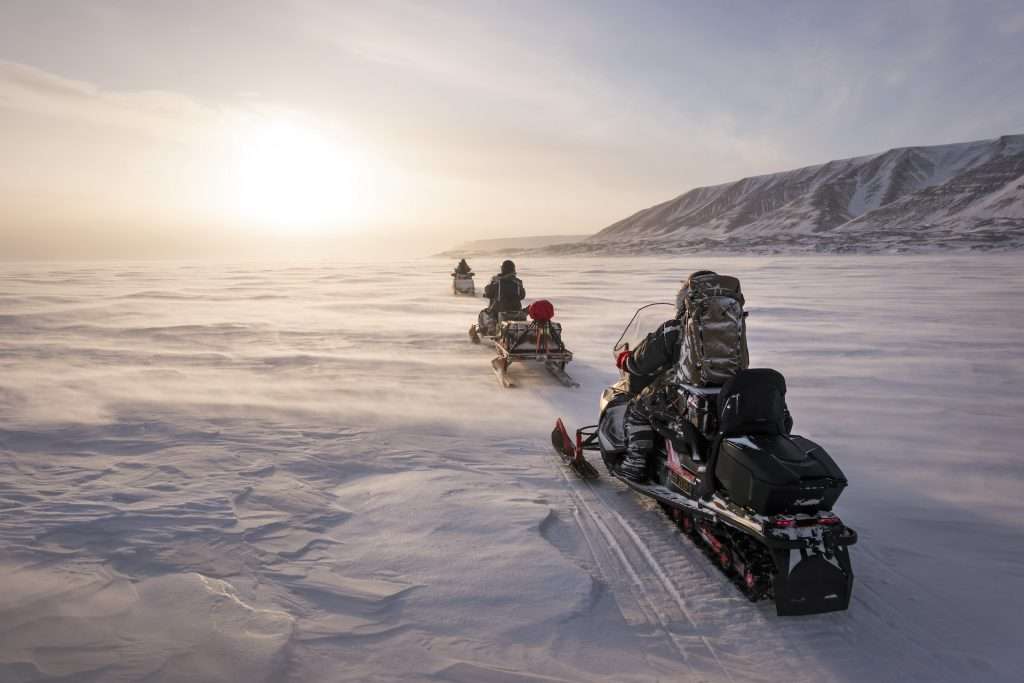 These roving shoots were the most challenging given the remote locations in Svalbard and harsh conditions that limited the number of people able to be accommodated at base camp.

For the winter/spring 2021 shoots, Fothergill and Wilson relied on highly experienced wildlife cinematographers Rolf Steinmann (A Perfect Planet) and James Ewen (Seven Worlds, One Planet), who worked with expert guides to locate and film their quarry and bring the footage back home.

“Being in the Arctic in late winter is such a challenging place to work that you can only have essential people on the ground,” notes Ewen. “There’s no space in camp for someone to download rushes. We had a storyboard, a very specific set of goals and a clear idea of the type of bear we were looking for and would be in constant comms with the production team back in the UK.”

One goal was to convey the staggering beauty and epic vistas of the Arctic landscape, which meant an easy acquisition choice for the production team. “Almost everything in natural history today is shot on Red” says Ewen. “It is the workhorse camera. Where Red wins out is it delivers both resolution and high-frame rates. On top of that, the cameras are tried and tested in this environment. The workflows are proven, and it produces extremely good images.

“The producers wanted a cinematic feel for Polar Bear,” he elaborates. “Very few natural history shows are shot 2.4:1, but for this story, and the scope of the arctic landscape, 2.4.1 was perfect. That was interesting for me as a cinematographer as you have to frame differently than you would for 16.9, to make different choices about composition. You can afford to make the aesthetic choice to place a bear in a far corner of the frame looking over the immense landscape. This has a subtle but powerful effect on the audience.” 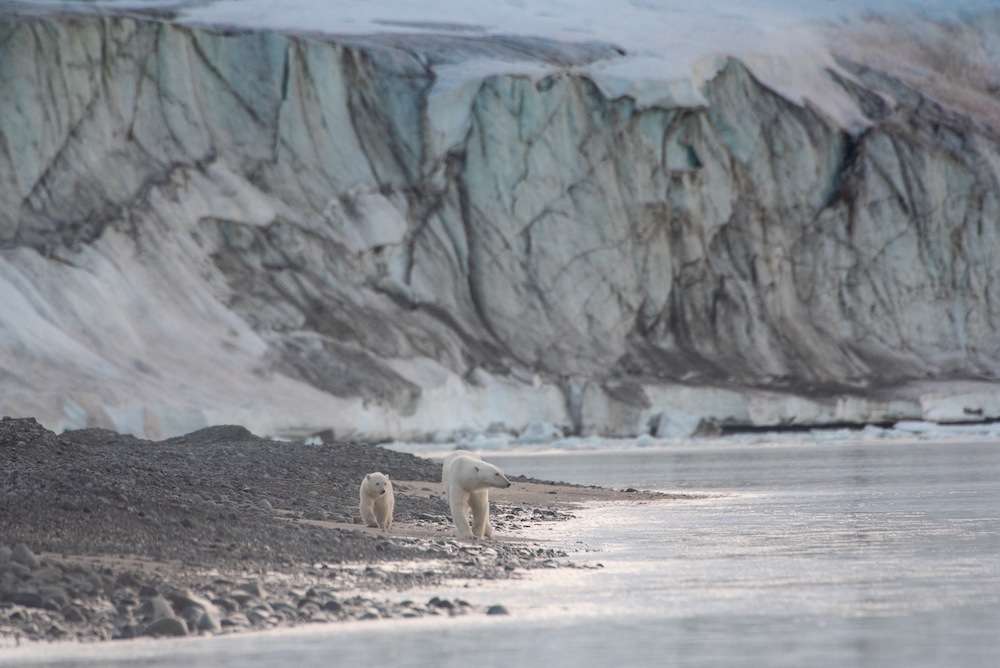 Ewen, a British wildlife cameraman based in Norway, worked on two blocks. The first was a summer shoot at the end of 2019 to film wildlife like arctic fox, reindeer and thousands of sea birds. Then, in March 2021, the time when the daylight is just returning at the end of winter, during which they tracked and filmed the bears.

For this block, he started out with a Red DMSC2 Gemini working in very low light and moved over to a Red DMSC2 Helium body as daylight hours lengthened.

“The way the Gemini sensor captures light and renders motion is extraordinary. The arctic has a tremendous variation in light and shadow. White can appear in many different shades from pastel blue, orange or purple, depending on where the sun is in the sky and the amount of moisture in the atmosphere. In late winter, when the sun barely peeks over the horizon, you have beautiful long shadows, creating extremely high contrast scenes. The sensor is really tested in those conditions.”

The feature was acquired at 8K (5K on Gemini) at compression ratios of 4:1-6.1 and mostly at frame rates in excess of 24 frames.

“In natural history photography, high frame rates are absolutely essential simply because shooting at standard 24fps looks unnatural somehow.” He explains that every animal has a ‘sweet spot’ when it comes to frame rate. “You might shoot an arctic fox at 32 frames a second, an elephant at 42 fps. This will be imperceptible to the viewer. It won’t look like slow motion, but it does convey a different feeling. A bear walking at 24 fps doesn’t feel quite right, but at 32 fps perhaps it does.”

Ewen finds himself constantly adjusting frame rates in tune with animal behaviour. “Certain actions like bears fighting or plunging into water you’d want to slow down to get that cinematic feel,” he says. “You want to see the water droplets. If you’re following a bear, you might shoot at a lower frame rate, but when filming close up on their feet at a long distance you’d adjust, otherwise it can appear as if the bear is trotting through the frame rather than walking. The ability to adjust frame rate is a key element for storytelling.”

With temperatures regularly below 40-degrees, reliability in the field is a major asset. “I am consistently impressed by how the Reds stand up. You are putting them into conditions that are far beyond the manufacturer’s recommendations.

“In the past, when working with other cameras, you’d put these big, insulated covers on them, but I never felt the need to do this with Red. The camera just continues working as it if were 10-degrees. If it started to snow, I’d pull a backpack cover over the brain and perhaps over the lens to stop it settling.”

Nonetheless, shooters do have to be very careful with managing camera kits at such extreme temperatures. He says, “The cables can just snap like a twig, so I tend to swap out my cables where I can for high silicone cables. I tape up the cable contact points and try and reinforce things as much as possible.

“I’ve had issues using third-party viewfinders before that refused to function in anything below zero, but the Red OLED viewfinder was fantastic. The liquid inside an LCD panel can freeze in minus temperatures but, OLEDs work well. We adapted a Dew Heater (a band used to stop condensation forming on a telescope’s eyepiece) for the Red viewfinder, which kept the temperature up and we had no problems.”

Changing lenses is not a decision to be taken lightly in the arctic which is why Ewen keeps the Canon ultra-telephoto CN20 locked for most of the time. “It’s not like you’re popping lenses on and off an SLR camera. You’re working without a camera assistant in extreme cold which means you must take incredible care when removing a lens. It is such a risk. You want to put a hand over the camera front to protect it from spindrift or you could end up with condensation freezing on the sensor.”

Each day Ewen would go out onto the ice accompanied by a guide and a spotter. Since bears traverse enormous distances and can be dangerous to life, logistics and safety are paramount. “You work as a team,” he says. “Some days you can see for many kilometres, but the spotters and guides have the skill to pick out a bear way into the distance. With the guide we’d ride to a safe distance to film while the spotter is on the look-out for other bears.

“Some of the areas we were working in are nicknamed ‘trouble rubble’ where the sea ice is broken up to create this graveyard of every type of ice you can imagine. A bear could be hidden anywhere, so you have to be observant the whole time.” 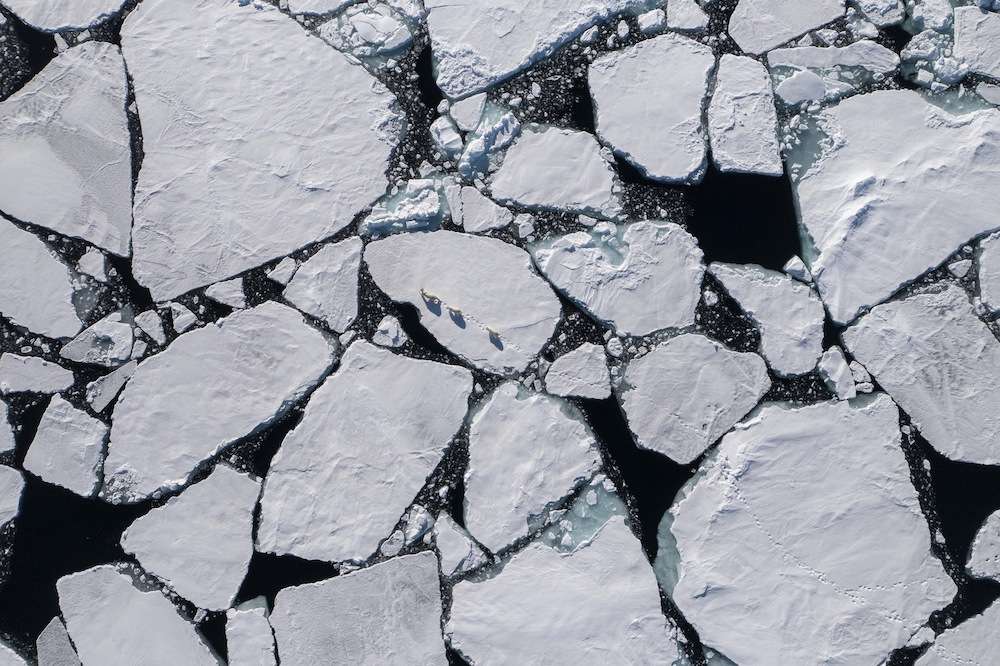 Another danger with sea ice is the potential of scooters and kits falling into the water. Ewen’s sled carried camera equipment in a Peli; other sleds contained everything from rescue ropes and pulleys to spare clothes, thermos flasks of hot water and dehydrated food to maintain their energy levels.

“You can’t just film any bear you find. For a start, they may look different to the one you need in your story. We needed a female with cubs, for instance. Also, the bears exhibit different behaviours. Some are very cooperative and go about their business as you’d hope; others see you and just walk away. There’s no point in following them across the ice because it’s unethical and doesn’t make any sense for the film since you’d only get a shot of their rear. Other bears are far too interested in you, so you’re not going to get any meaningful footage. It’s a very fine balance but our guides have incredible knowledge and are able to read behaviour and indicate which bear we can work with.”

Among the most remarkable behaviour captured for the first time on camera was footage of polar bears essentially skating together on the ice. This was captured by Steinmann and award-winning aerial photographer Florian Ledoux.