In what was one of the wildest, and most ground-breaking awards ceremonies of recent memory at the Cannes Film Festival, French filmmaker Julia Ducournau became the second-ever female director to win the Palme d’Or, with her audacious Titane. The last time a woman scooped the top prize was in 1993 when Jane Campion shared honours in a tie between her The Piano and Chen Kaige’s Farewell My Concubine.

While there were harbingers that Titane was destined to take home a statue this evening — she appeared on the red carpet ahead of the closing ceremony — it became very clear that her film was the primo laureate when jury president Spike Lee inadvertently announced the Palme at the outset of the ceremony.

Evidently misunderstanding a cue for the first prize of the evening as “first prize,” Lee gave away the goods which resulted in nervous anticipation, a Twitter explosion and also evident delight from the audience in the Lumière theater here in Cannes. It took a while for things to get back on track as Lee conferred with the jury members assembled on the side of the stage, apparently in an effort to understand what had just gone down. 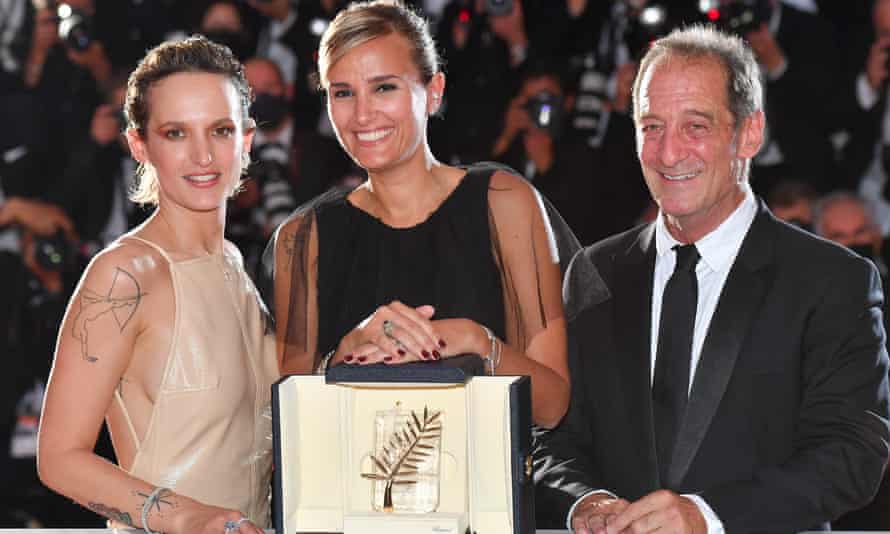 The usual system at a Cannes awards ceremony is a tandem between the jury and host as well as an awards presenter called to the stage for a specific category. When it finally came to the Palme D’Or this evening, Lee began, “In my 63 years of life I’ve learned that people get a second chance, so this is my second chance, and I apologise for messing up; it took a lot of suspense out of the night.”

Sharon Stone then came out to hand the Palme to Ducournau who was — despite, or maybe because of — the earlier reveal, very emotional. Amid a standing ovation, she said, “I I keep shaking my head… I don’t know why I’m speaking English, I’m French. This evening has been amazing. Thank you Spike, it’s because of you.”

She continued, in French, to explain she had watched awards ceremonies from a young age and “was sure that all winners must be perfect because they were on this stage. Tonight I am on this stage and I know my movie is not perfect, but I don’t think any film is perfect in the eyes of the person who made it, some may even say it’s monstrous.” She concluded that the prize would hopefully recognise “a world that has a need to be more and more fluid.”

Other notable winners included Best Director Leos Carax for Annette, though he was not in attendance. A tie between Asghar Farhadi’s lauded A Hero and young Finnish filmmaker Juhu Kuosmanen’s Compartment No. 6 for the Grand Prize resulted in a giant hug between the two, with the latter seeming shocked to be in such company.