Atomos races to the end of landmark year

With 2022 marking the debut of the new, award-winning Connect range and the launch of Atomos Cloud Studio, the year has already become a landmark for Atomos. The response to the new products and the workflows they support has been overwhelmingly positive. There’s more on the horizon and in the coming weeks will see new updates to ensure the current momentum carries over into 2023.

The latest addition to the Connect product range is Zato Connect , a brand-new 5-inch device, which provides support for HDMI and USB UVC sources. Today, Zato Connect can be used to switch between two sources, overlay graphics, record the edited program, as well as stream to platforms including Facebook Live, Twitch, and YouTube. A future update, to be released before the end of the year, will introduce Adobe Camera to Cloud, powered by Frame.io, support to Zato Connect for the first time. The device records H.264 (up to 80mbits) to SD card and will be able to simultaneously upload files directly to Frame.io through C2C for fast turnaround. The recorded stream can combine sources, include graphics, and mixed audio to make posting to social timelines faster and easier than ever.

Since its launch in early 2021, C2C has been used by over four thousand productions to share footage directly from the set with remote team members. The Connect products made C2C workflows possible for digital cinema, mirrorless, and DSLR cameras for the first time. Zato Connect extends this reach further by introducing support for USB UVC sources. The introduction of C2C support will bring Zato Connect into alignment with the other Connect products and provides customers with a comprehensive product range to suit the needs of every emerging workflow.

The power, durability, and quality of Apple ProRes Raw has been embraced by digital filmmakers around the world. Atomos devices have played a major role in making the format accessible to a wide range of cameras and transforming creative opportunities for productions of every kind. The work continues to bring ProRes Raw to even more cameras and continues to push boundaries as new models are released this month from Sony and Fujifilm. 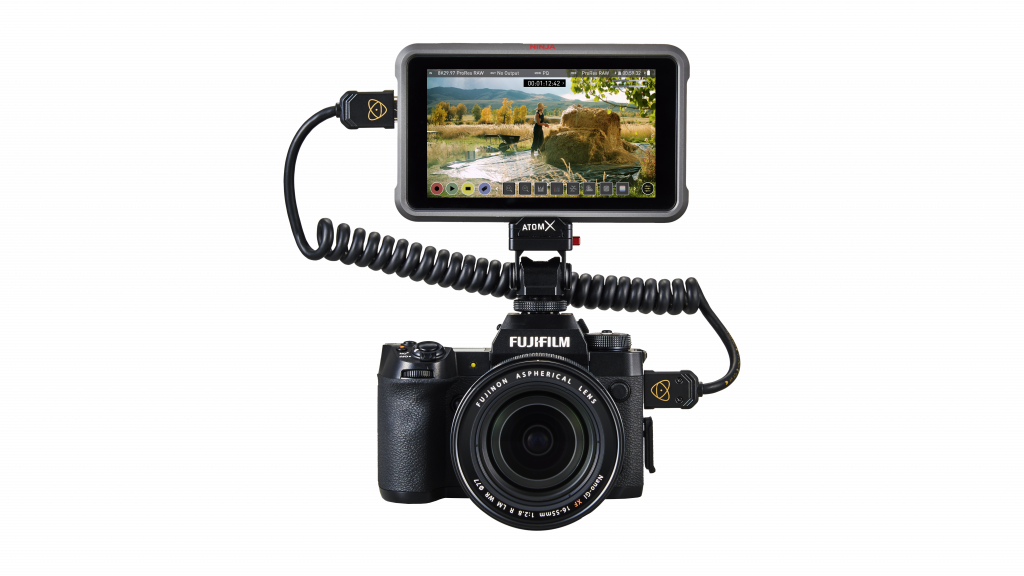 Sony’s ILME-FR7 is the world’s first[1] pan-tilt-zoom (PTZ) camera to also combine interchangeable lenses and a full-frame image sensor. The variable speed internal pan and tilt mechanism can be controlled remotely or recalled to up to 100[2] preset positions. The camera supports high-quality E-mount lenses, including the renowned G Master series and offers a wide 15+ stop latitude[3]. Designed primarily for remote head use, the screenless ILME-FR7 is ideally paired with the 7-inch Shogun Connect or 5-inch Ninja V+. Both devices feature a bright HDR screen and a range of monitoring tools to complement power of the camera. The Shogun Connect and Ninja V+ (with the Atomos Connect or legacy AtomX SDI module) are also able to record 4K Apple ProRes Raw up to 120fps over SDI. The long-standing relationship between Sony and Atomos has produced some notable results over the years and this announcement reflects an increasing confidence in the ability of Atomos devices to add value to each new camera and allow to push the technology envelope.

Fujifilm has also announced the new breakthrough X-H2, offering an 8K image sensor in a mirrorless camera for the first time. The X-H2 follows the same form factor as the popular X-H2S and dials up the performance to previously unprecedented levels. The camera outputs 12-bit 8K RAW only over HDMI and therefore requires the extra processing power provided by the Shogun Connect or Ninja V+ to record ProRes RAW at rates up to 30fps. Once again Fujifilm and Atomos are challenging preconceptions about what ought to be possible with a compact, mirrorless camera. The X-H2 stakes a new claim in terms of performance and opens the door to new creative possibilities for digital filmmakers everywhere.

ProRes Raw announcements are always popular and Atomos is fully committed to working with partners to embrace new cameras as they are released. The ProRes Raw ecosystem is expanding rapidly, and the team is focused on solving new challenges, improving performance, and providing even more options. Based on the current roadmap, customers can expect several more additions to the lineup before the end of January 2023.

Atomos Cloud Studio
Since the first Atomos Cloud Services went live in June customers have been able to experience the ease with which their Connect product range devices can be configured to access Atomos Stream, for Twitch and YouTube, and Atomos Capture to Cloud, with support for Adobe Camera to Cloud, powered by Frame.io. As Atomos Cloud Studio transitions to a subscription model Atomos is enabling support for Facebook Live and additional RTMP platforms, as well as adding features for live-streaming to multiple destinations and advanced controls for video quality settings.

Following a successful technology preview at NAB, Atomos is planning the release of Live Production before the end of the year. Live Production is a complete, cloud-based control room for live video and remote collaboration. With Live Production, video creatives will be able to produce a live show with the highest production values and quality, from anywhere in the world. Inputs are streamed into the cloud at super-low latency via the Atomos Connect range of devices. The fully featured video switcher and sound mixer includes video effects, graphics and an integrated talkback system. Production for live events and multi-camera shoots has never been this accessible or this easy.