Virtual Production with Notch Builder and Assimilate Live FX
This combined VP solution revolutionises how 3D scenes can be merged with live camera imagery. Notch Builder allows creatives to build the entire 3D environment with incredible speed and quality. The 3D scenes can then be exported as an industry standard Notch Block, and loaded into Assimilate Live FX for live compositing in green-screen environments, or for projecting onto LED walls on virtual production stages.

Virtual Production (VP) artists can now – for the first time – perform advanced live-compositing tasks in real-time, creating previz-and final-pixel composites using Notch Blocks inside Assimilate Live FX Studio. Notch Blocks running in Live FX Studio allow for real-time adjustments of any parameter, such as lighting, virtual TV-inputs, position of various objects, and the virtual-camera position and angle. Incoming data from various camera tracking solutions can be linked to the virtual camera of the 3D scene to create the perfect composite. Both Notch Builder and Assimilate Live FX Studio are built for creatives with artist-oriented user interfaces rather than a programming environment. 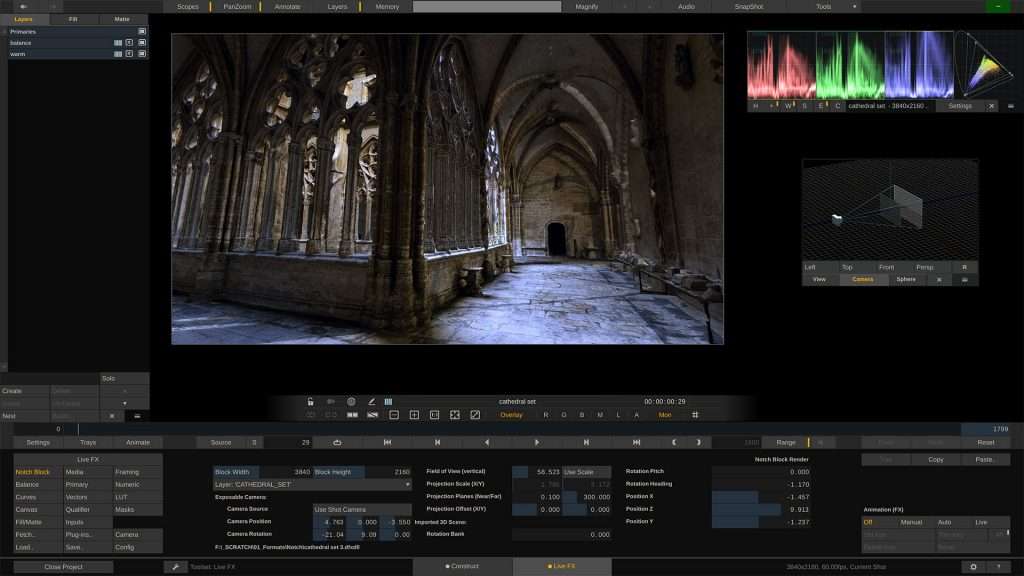 “As digital cinema technology evolves and grows, we remain dedicated to working with our partners to innovate and provide the most streamlined workflows for our users. Together with Notch, we’ve developed an incredibly efficient, freaking fast workflow that will propel virtual production (VP) into the mainstream, greatly increasing creativity and productivity for all creatives,” said Jeff Edson, CEO at Assimilate. “The team at Notch shares this approach and was exceptionally helpful in implementing support for 3D Notch Blocks into Live FX. We’re excited to see what our users will make of the new possibilities to create stunning live composites right on set.”

“On-set workflows have evolved over the past few years, and Notch is at the forefront of this technology, enabling amazing virtual sets and interactive performances for some of the biggest artists and performers in the world. Our partnership with Assimilate enables this technology to be used in broader markets for more varied use-cases than ever before,” said Luke Malcolm, co-founder of Notch.

Video Demos
A video of Live FX Studio rendering two camera angles from a 3D Notch Block onto a single LED wall can be seen below:

A four-part tutorial series on how to use Notch Blocks in virtual production workflows, post workflows, QC sessions, and how to master and transcode material to NotchLC, can be watched at:

Redefined Post Workflow with Notch Builder and Assimilate Scratch
Assimilate did not stop with on-set. The same 3D environments can be loaded into Scratch for review and QC, or to be used in finishing sessions. In the finishing world, using 3D environments in a traditional colour-grading session is a gigantic leap forward. Via Live FX Studio to Scratch hand-off, users are able to recreate the VP-scene from set, relink to camera RAW footage, and create high quality plates for VFX, including all frame-based metadata.

Scratch has become a tent pole in dailies creation and content mastering. With its just released version 9.5 it now also allows not only Notch Blocks, but literally any format to be transcoded to Notch’s high-performance video codec NotchLC for live productions and big-screen or LED-wall installations. This includes any colour grading, animation or colour space conversions that have been applied to the footage inside Scratch. When exporting to NotchLC, Scratch will automatically write all metadata to the file where it can be correctly interpreted and displayed on the target media server.

Furthermore, Scratch can be used as a lightweight asset-management and media-server tool to play out any kind of content on an LED wall installation.

“On a recent project we had to deliver five different 15 minute-long clips in multiple resolutions, ranging from 1.2K to 4K, which were loaded onto a media server for a synchronized multiscreen high-profile event,” said Leo Lovera, owner of Moving Forward Studios, a high-end finishing studio in Miami.

“We were able to render those clips 3x to 5x realtime with the native NotchLC encoder provided in Assimilate Scratch and get them onto the playback truck in the fastest turnaround time the client and the media team have ever seen. We could not have met the deadlines, or been as flexible with on-site changes to the content, with any other software.”

Pricing and Availability
To open and play back Notch Blocks inside Live FX Studio or Scratch, a Notch Playback license is required. Available today, Scratch supports decoding of NotchLC. Encoding of NotchLC is currently provided under a special license, free of charge, until December 31, 2022. A watermarked 30-day trial license of Scratch and Live FX Studio with Notch encoding support can be obtained at this link: https://register.assimilateinc.com/registrationnt.aspx
Pricing for Live FX Studio starts at $495 per month; Scratch starts at $89 per month.