Rosco ambassador Richard William Preisner is a London-based cinematographer who works on short-form content such as commercials, branded content, fashion, and music promos. His passion for lighting and composition recently led him to create a Diffusion Comparison Tool for filmmakers and photographers. Will oftentimes found himself using the same diffusions over and over again, usually because they were what was available on set. Knowing there were other options beyond 251, 250, and 216 – Will wanted to understand the effects of the other available diffusions. So, he began comparing diffusion materials and exploring how each one could be integrated into his creative process. Knowing that others would benefit from what he was learning, he gathered his findings and posted them onto his website.

The Diffusion Comparison Tool is a free web application for comparing Rosco’s diffusion materials. It’s an easy way to explore how each material works independently, then analyze how one material performs versus the others. As you scroll down the page, you’ll see a short video for every Rosco e-colour+ diffusion and bounce material. Each video allows the viewer to examine the effects of one particular diffusion by showing the same setup with, and without diffusion. 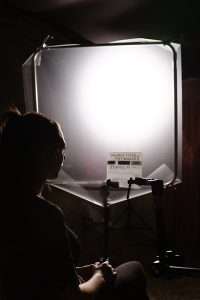 The model tests begin with a head & shoulders shot lit with a specific diffusion – followed by a closeup using the same setup. Then the video repeats to show what the setups look like without the diffusion. This allows the viewer to evaluate how the light falls on British Fashion Model Atalya – with and without the diffusion featured in that video.

Following the model tests is a shadow test. Using a similar setup, this section displays the still life with and without diffusion. This allows the viewer to examine how that particular diffusion affects the shadows in a shot.

Each diffusion video also provides the viewer with valuable data in the upper left corner, including the stop-loss of each diffusion and any perceived color temperature shift.

While the Diffusion Comparison Tool is not a mobile app, it can be used on a mobile device. Knowing that most filmmakers and photographers will want to have this tool on set while they’re shooting – there are instructions on how to save this tool to your mobile device for quick and easy access. And, for those that are truly in a hurry, there is even a Diffusion Comparison PDF with still frames from all of the videos in one handy document.